Pennsylvania man tells anchors to ‘get a life’ over chair swapping 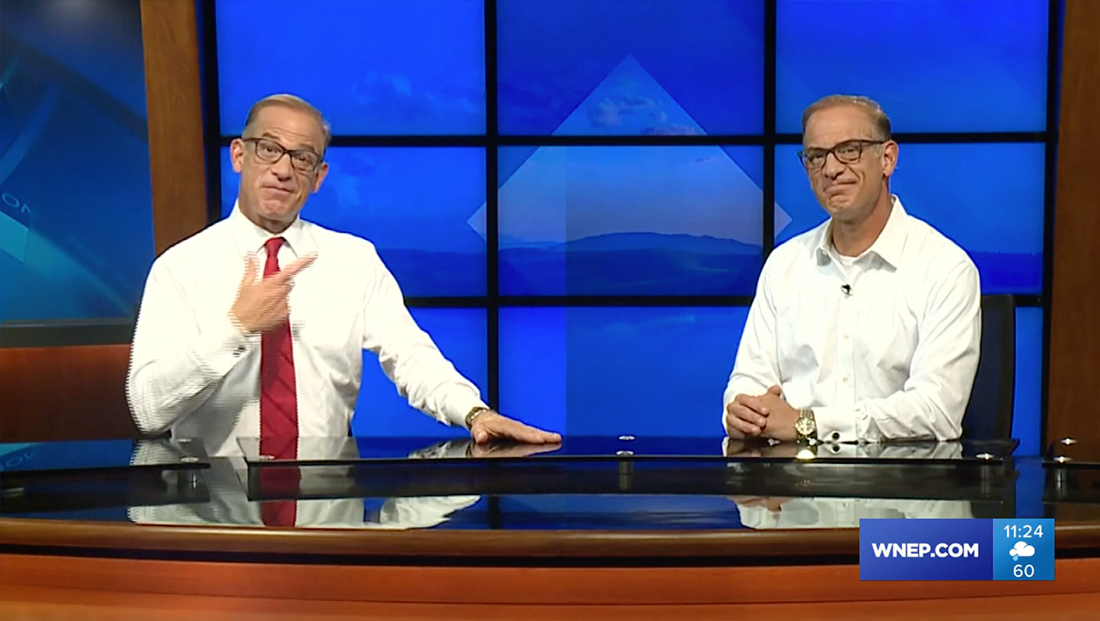 A Pennsylvania station got called out for, of all things, how it seats an anchor on the same side of the set whenever his or her co-anchor is out.

WNEP in Scranton/Wilkes-Barre, Pennsylvania has a call in line called Talkback 16 that lets viewers call in with comments that the station records and plays back on its newscasts.

A caller from Stroudsburg, Pennsylvania, recently phoned in with a complaint about how the station’s anchors sit when one is out — with the remaining anchor always sitting on the right side of the screen.

“How come’s (sic) when the anchor is not at the news desk the other person, the co-anchor, moves over into their seat. They all do it. What’s the big deal? That’s ridiculous. Get a life!” he said.

This is the same segment where WNEP got called “arrogant” and “a bunch of jerks” for past graphics package updates.

Scott Schaffer, who happened to be the “MIA” anchor that set Stroudsburg man off, and also hosts a weekly segment where he responds, often sarcastically, to the best viewer calls, responded with a perfectly reasonable explanation that news industry folks likely already knew: It has to do with the graphics fed to on set monitors, camera framing and lighting in the studio.

WNEP is also somewhat unique in that it uses an outdoor weather studio, which means forecasters typically don’t sit on the set for tosses, meaning it has to use a different approach. 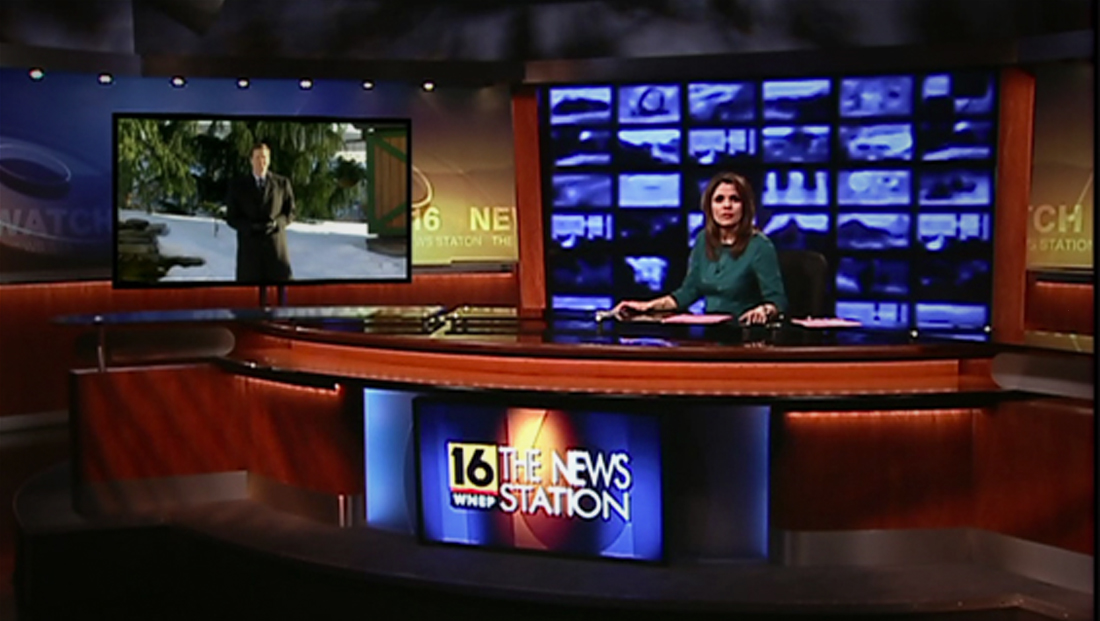 In this file image from a WNEP newscast, the solo female anchor is seated in the camera right position, similar to the arrangement the Talkback 16 caller mentioned in this post took umbrage with. The image of the forecaster, who is standing outside the station’s building in the snow, is shown on a large simulated monitor to the left of the screen. In real life, there is a flat screen monitor here (the two support pipes visible just below are real), but the station uses some TV magic to make the screen look bigger so the forecaster is easier to see. The camera that captures this shot is locked down, so if the anchor was sitting in the camera left position, it would throw off the composition and framing of the shot.

Like most stations, WNEP typically has “assigned seats” when there are two anchors on set. 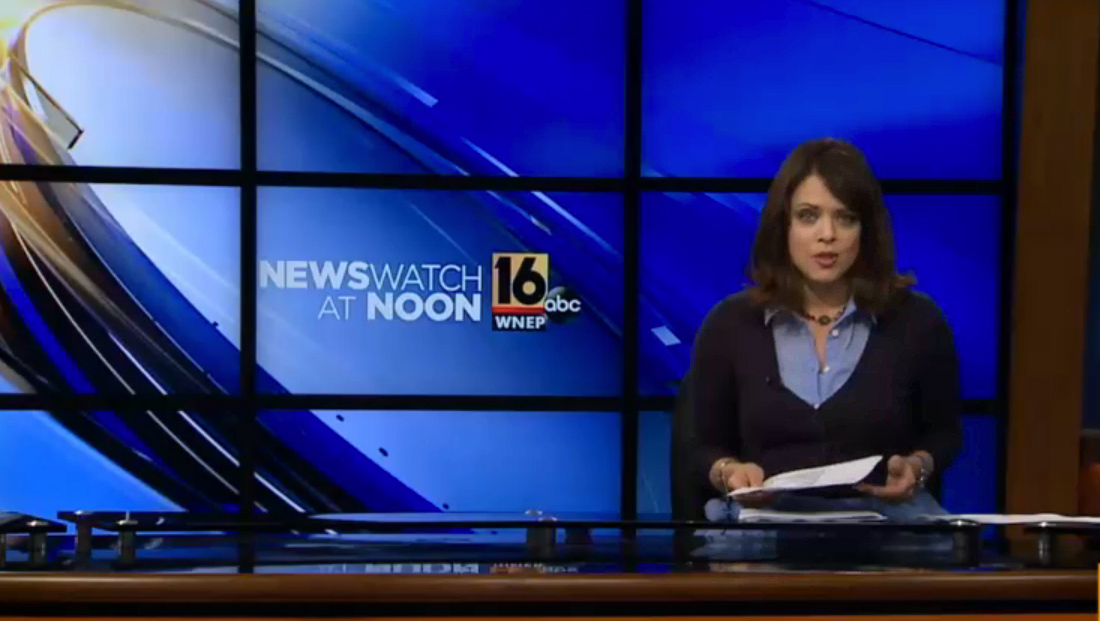 At WNEP, the male typically sits camera right (based on what the viewer sees) and the female camera left. However, when there is a solo anchor, that person almost always sits camera right, which is the bone of contention that the Stroudsburg viewer apparently had with the station. 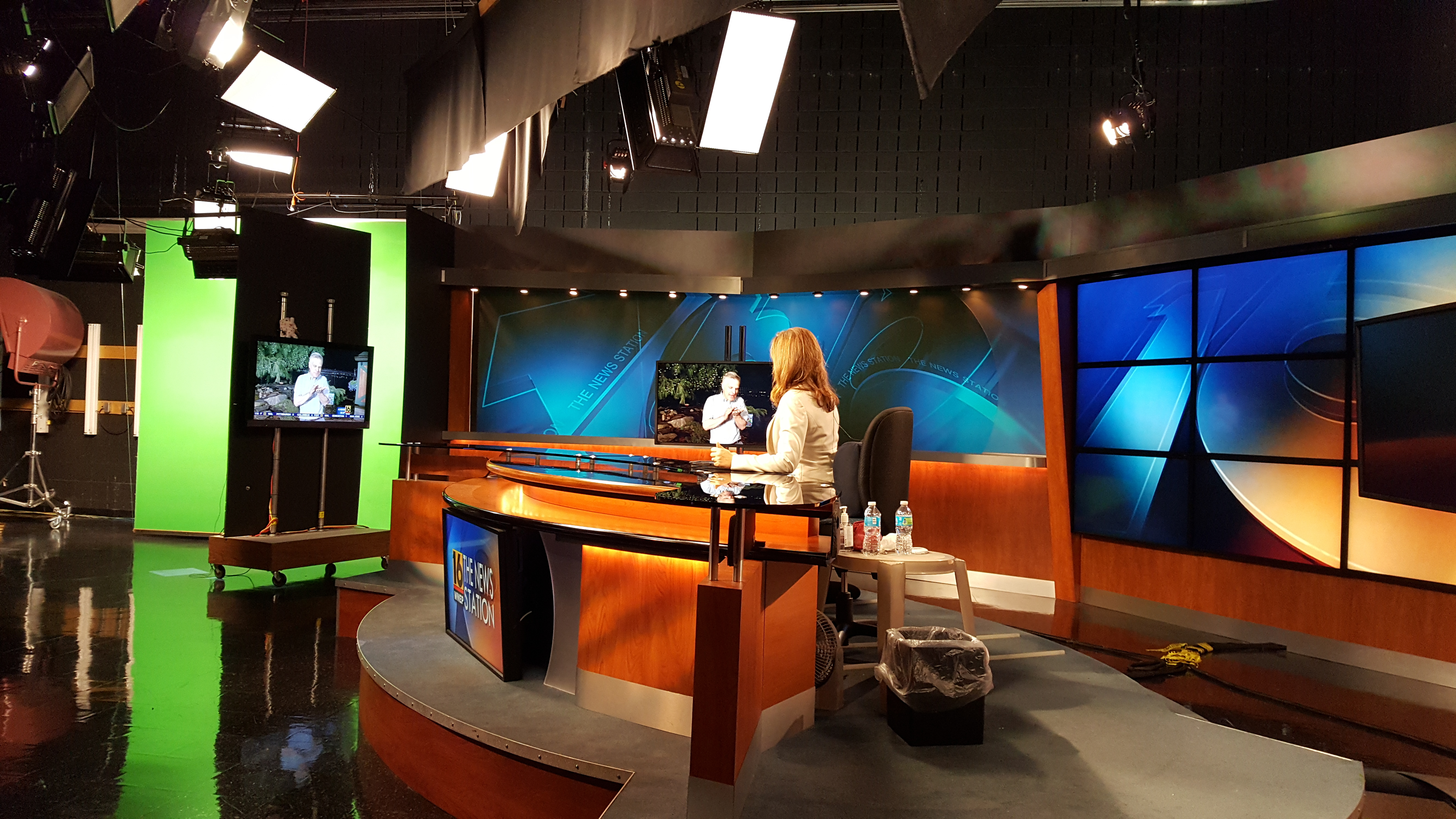 This image, taken behind the scenes, shows what the studio really looks like. Note the smaller screen in the middle of the blue background showing the forecaster outside.

Some stations use the same approach, others flip male and female positions or, in the case of male-male or female-female anchor teams, use different factors. These can include seniority or if one person is anchoring the show immediately before or after.

The seating, especially when anchors are out, can even change day to day to prevent one anchor from having to switch seats in between shows based on who’s on set for the next newscast.

WNEP had a little fun at the caller’s expense by creating a “split screen” scene that had “one” Scott Schaffer sitting camera right and a “second” Scott Schaffer taking the seat on the left, all accomplished by filming two versions of the segment and blending them together, a longtime Hollywood trick that’s been used in films such as “The Parent Trap” and others.

It then played a call from a woman from Lackawanna County.

“Why doesn’t he get a life? You’re going to call to complain about something like that?” she opined.

The rest of the segment was filled with callers commenting about various anchors’ and reporters’ hair — as a tongue-in-cheek “reinforcement” of the station’s “serious journalists.”