ABC heads to border for outdoor ‘This Week’ edition 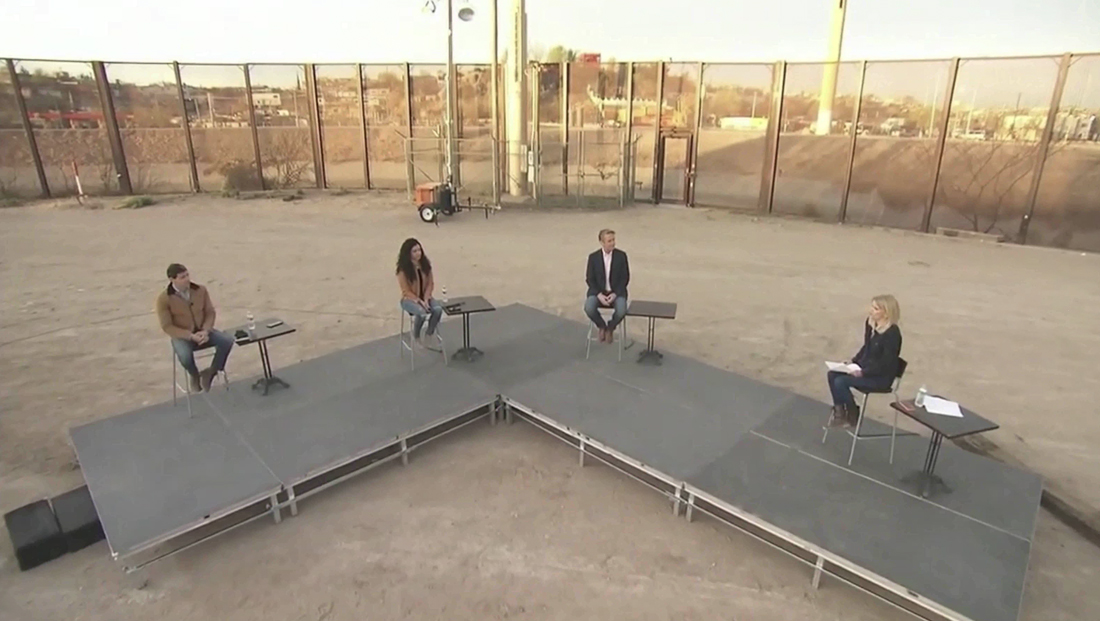 ABC News‘ “This Week” broadcast a special edition of its show from the U.S.-Mexico border in El Paso, Texas, using a border fence as a backdrop for a widely spaced outdoor version of its “powerhouse roundtable” that didn’t exactly suggest a circle.

Headed up by co-anchor Martha Raddatz, the March 21, 2021, show started wide an aerial view of the portion of the fence ABC opted to use — near a sort of bend in the structure.

The network set up an L-shaped riser in a large grassless area on the U.S. side of the border.

Early in the show, Raddatz was joined on set by U.S. Rep Michael McCaul, a Republican representing Texas’ Congressional 10th district that includes Austin but is several hundred miles from the border and even farther from the El Paso site (El Paso’s rep is Democrat Veronica Escobar).

Of course, the term “roundtable” can be both metaphorical as well as referring to an anchor roundtable setup that interview- and panel-centric shows like “This Week” often use.

The new “Meet the Press” set, for example, has an actual round table.

However, with concerns about airborne droplets at the forefront of everyone’s minds, networks are cutting back on in studio guests and, when they do come in, space them out and try to prevent them from facing each other in close proximity.

On select editions, guests join George Stephanopoulos in studio, though, like “Meet the Press” and “Face the Nation” more interviews are being done remotely for the time being. The show has also used the main “GMA” set downstairs.

When in Washington, the studio allows for a discussion at a rectangular table, though that’s in limited use during the pandemic.

The riser appeared to be the type that can be rented for parties, special events and performances.

Each person sat on a stool with a square table next to them for notes, devices and beverages.

Throughout the taping of the show, the on the ground team clearly had to deal with the affects of the rising sun — it was still rather dark when the show started and started getting noticeably lighter as the show went on, causing some “hot” shots that probably could have benefited from being re-white balanced.

Sunday morning public affairs shows including “This Week” typically tape their shows early Sunday morning and, depending on the market, often air them within a few hours. The segments are often done “live to tape” to retain the integrity of the live debates and interviews, though light editing is sometimes used to adjust for time or fix flubs.

Some on social media took notice of the somewhat unusual setup, including some comparisons to the now infamous CPAC stage design that some said followed the look of a Nazi rune — though the ABC setup was, at best, only a small part of the symbol.