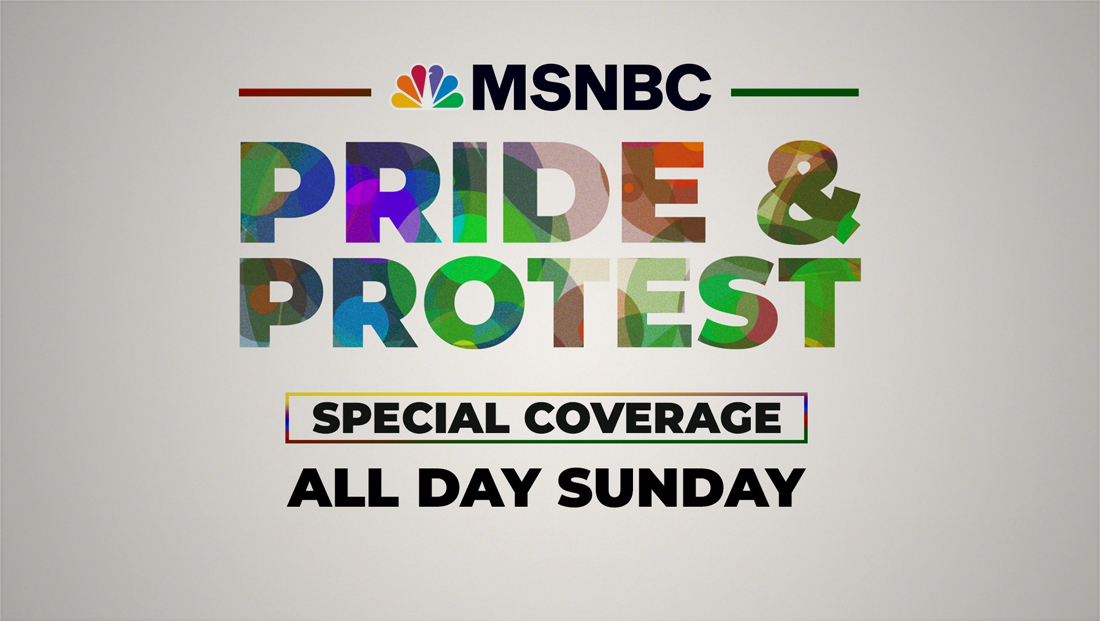 MSNBC marked the last weekend of LGBTQ pride month with a day of special programming under the banner “Pride & Protest.”

The network promised special segments throughout its Sunday, June 27, 2021, normal programming, which includes blocks of “MSNBC Reports” (formerly “MSNBC Live” and “Weekends with Alex Witt“), “Velshi” and “The Sunday Show.”

Lindsey Reiser, who co-anchors weekend mornings alongside Kendis Gibson, was dispatched to Greenwich Village to provide live reports from the city’s a scaled down physical pride parade after her morning stint in studio.

Our #PRIDE2020 family photo! While sheltering at home isn't how we imagined spending our first months in New York (or marriage!), I'm so grateful we are all together. 🏳️‍🌈 #HappyPrideMonth #PrideMonth pic.twitter.com/ICIIw5vwEx

MSNBC’s “Pride & Protest” branding used a multicolored bokeh light effect design for much of its programming, which also included circular mattes and animations.

The look was also incorporated into the network’s standard lower thirds, appearing in animated transitions and as the top tier on the banners.

A promo for the Capehart’s special also borrowed elements from its parent company NBCUniversal’s “Pride is Universal” campaign, which was used across the company’s family of properties, ranging from USA, Bravo, E! and more.

This look also leveraged a colorful palette but with more straight lines and overlapping edges that blended to for new hues.

Both NBCU and MSNBC’s graphics packages took on unique interpretation of the iconic rainbow pride flag — which did make a more literal appearance on the wraparound LED video wall behind Capehart during the special broadcast from the NBC News Washington, D.C. bureau Studio N5.