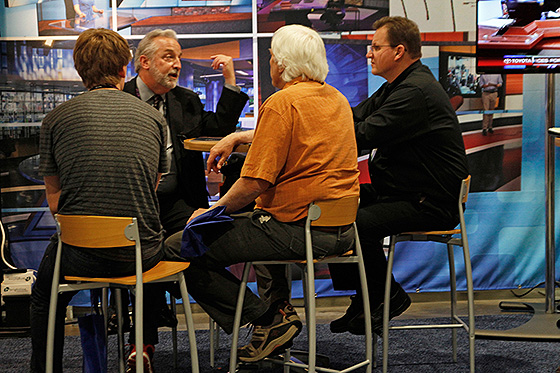 NewscastStudio is following Devlin Design Group and Brightline this year at NAB, exploring their convention experience. This is the final in a three part series, read day one and day two to see the full experience.

The mood is changing on the floor of the NAB.

Yesterday it was more about hunting and gathering—today the focus is narrowing and it’s all about making decisions and writing business.

But this convention is not all about the art of the deal. I spent most the day hanging around the Devlin Design Group/Brightline booth listening and watching.

There was a mixture of people stopping in at this gathering place.

Some just stopped by to say Hi. “Dan built a set for me in ________ and I just wanted to say hello.” By the way, the reason I left the location blank, is because I heard a wide range of places where these sets were built…from South Bend to Rome.

Some were considering large projects and enlisted the help of Brightline President Sam Cercone, and DDG Creative Director, Dan Devlin who both listened carefully to what was said before offering creative solutions.

One vignette I witnessed was particularly touching. Two young women in their twenty’s approached DDG’s Director of Production, Hannes Kling. They told him they were at this convention to improve the studio at their church.

“We’ve come to collect ideas,” she said with a slight Southern accent…”can you help us?”

Hannes was very gracious, and began to ask questions about their space and their equipment. By the time the conversation was over, he gave them actionable (and affordable) things that they could do when they returned home. They had no idea they had received consulting from a man who does scenic projects in places like New York, Los Angeles and Chicago.

Apparently, It’s not always about just doing the deal.

Brightline’s Joe Cervone told me the fixture I saw was indeed a task light…but it is also a single or double 45-degree video light, and all within the same body!

This Brightline VideoPlus fixture came in pretty handy when Brightline was asked to light two situation rooms in the White House. In an office setting like a conference room, they provide regular, in-ceiling task lighting. But when the room’s lighting requirements turn to video conferencing, the fixtures transform by providing two additional video lighting functions, and all within a 6-inch width!

These fixtures were used in the re-invention of KTVA in Anchorage, a ground-breaking integrated and collaborative effort between Brightline and Devlin Design Group.

Bottom line is they look like regular, in-ceiling office lights, but can increase their intensity and provide state-of-the-art video lighting.

You’ve probably seen these fixtures in newsroom studios and video conference rooms and never noticed them. That, I’m told is the point!