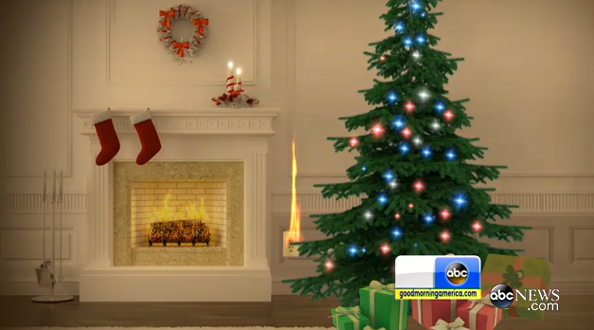 Just in case you’re not sure what flames coming from an electrical outlet might looks like, ABC News has you covered.

During a “Good Morning America” report this morning, the network aired a package about the deadly fire at a Maryland mansion, reporting that officials have confirmed the blaze was set by a faulty outlet that ignited a dry Christmas tree.

In the package, a computer generated image of a living room and Christmas tree, complete with animated GIF-worthy blinking lights, showed a thin ribbon of flames coming from the virtual electrical outlet.

We’ve noted before how ABC News likes to use what it calls “Virtual View” to illustrate both complex and rather simple concepts such as a woman throwing a glass of water on a man — although this animation apparently wasn’t worthy of the official “Virtual View” seal.

In fairness, later in the report ABC did use actual video taken from a fire demonstration. Also of note, the network also included a graphic that incorporated a still photograph from the scene of the Maryland fire edited to include a cutout firefighter and superimposed text over the home’s chimney.