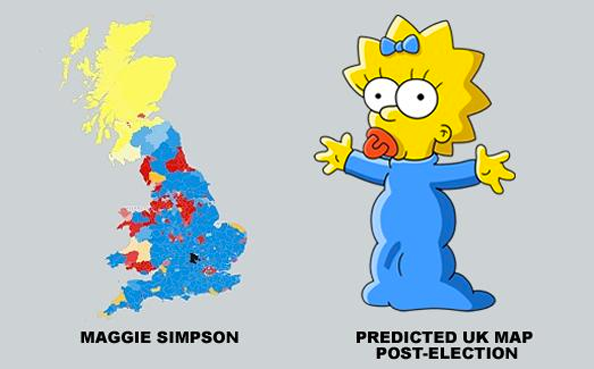 We all know how TV news loves using maps for election results and predictions — but who knew a cartoon baby could actually “predict” the results of a vote?

Well, one Twitter user noticed that the map created by the Telegraph newspaper to illustrated its estimated results bore a striking semblance to one Maggie Simpson.

On most election maps used by the media, a yellow shade was used to represent the Scottish National Party, which, perhaps not surprisingly, happened to sweep Scotland, which is located in the northern portion of the United Kingdom isle.

That yellow blob mimicked the trademark yellow skin tone of the Simpsons characters and its positioning, along with some of the natural geographic shapes of the island, created Maggie’s “head.”

Blending with the blue tones for the Conservative Party that dominated the midsection and southern part of the island and smattering of reds for the Labour Party, and you get pretty close to Maggie’s “body.”

That prediction map, by the way, ended up being very close to the actual results, making some to “believe” Miss Maggie may have had some insight into the political goings on in Britain.