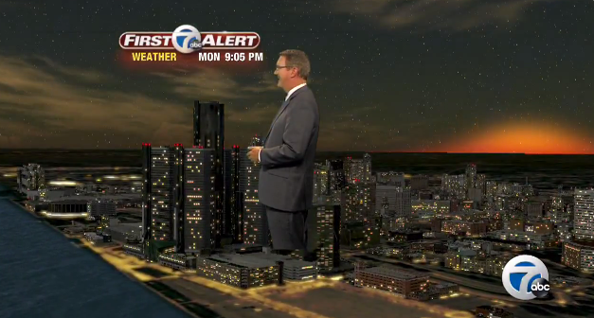 WXYZ-TV meteorologist Dave Rexroth found himself in a bit of an odd situation during one of the Detroit station’s recent forecasts — sans feet.

Rexroth was just beginning his forecast in front of the chroma key wall when, after presumably glancing at himself in an off-camera monitor, he noticed his feet were cut cleanly “cut off” (actually basically everything below the knees wasn’t showing up). Looking at it another way, Rexroth appeared to be floating in the middle of his weather graphics.

Rexroth and the anchors managed to make light of the situation, which become more apparent when he stepped to one side and disappeared abruptly in the middle of the graphic.

Watch the full clip, courtesy of the station, here: