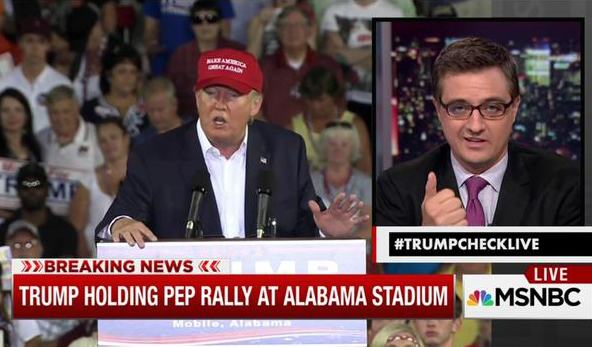 During Republican Presidential candidate Donald Trump’s Friday night rally in Alabama, MSNBC’s “All In with Chris Hayes” choose to augment the speech with live fact checks.

A box slid in from the right and offered a text correction to a Trump remark, or host Chris Hayes would pipe in himself with a live shot. At one point during the speech, Donald Trump spoke about how the networks covered him with MSNBC receiving large boos. MSNBC’s graphics department responded on-air with a #TrumpCheckLive:

Big boos when @MSNBC mentioned by Trump, here's how they responded #TrumpCheckLive pic.twitter.com/ISv8lu0ctY