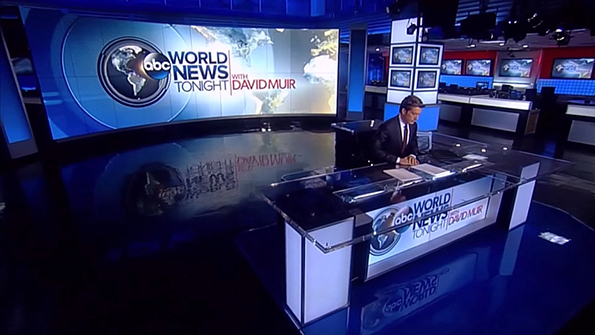 The look replaces the patriotic blocky map, in use since Diane Sawyer helmed the show, with a map full of opaque overlays.

The show’s logo also was updated, switching to a sans serif font and removing many of the previous effects.

The graphics package is very glassy, with many layers and micro-text elements. Overall, the package has a darker tone, as it relies primarily on a deep blue color, creating a serious feeling and aligning its design with “NBC Nightly News.”

The opening sequence has also been shortened, with the logo fully forming on the monitor wall as the camera frames a wide shot of the anchor desk and newsroom. The package also has hints of gold in the world map and title card, echoing the look used by ABC in 2009.