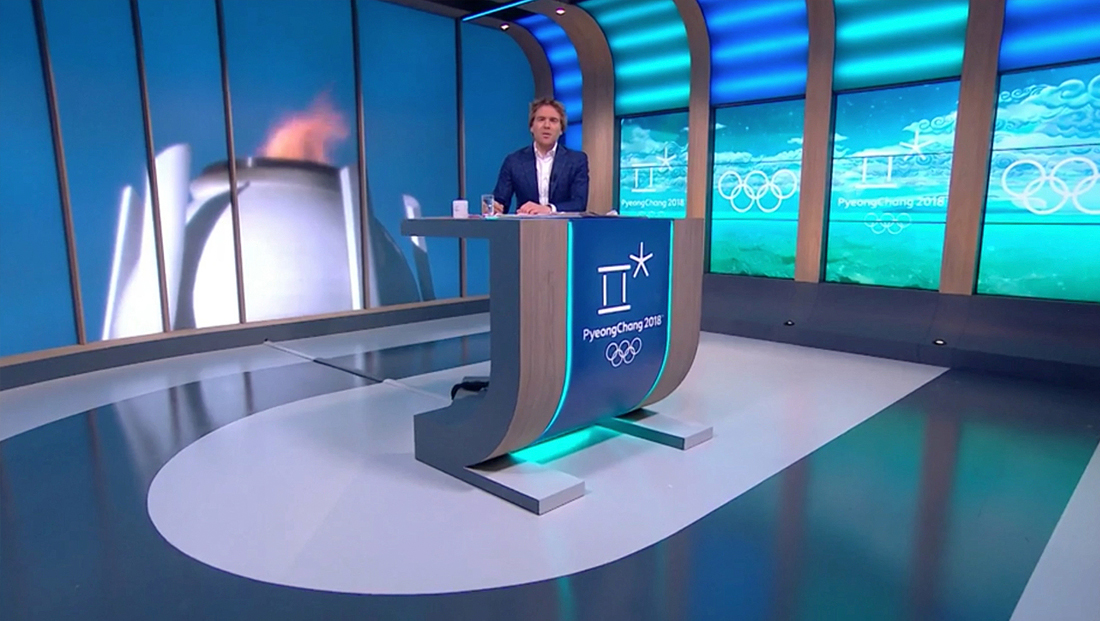 Nederlandse Omroep Stichting has created dedicated studio spaces both in Asia and back home in the Netherlands to cover the 2018 Winter Olympics.

For more formal coverage of the games, NOS has set up a small but modern studio in the network’s Hilversum studios in the Netherlands that features curved wood banding with vertical stacks of video panels topped with backlit panels.

The studio was designed by Anne-Mari Ahola of Aloha Production Design with fabrication by Unbranded. Next to this, oversized video panels are used to showcase video of a topical imagery, such as a rather close up shot of the Olympic cauldron or Olympic Rings in PyeongChang. In South Korea, the network has created a studio in the shared broadcast facilities at the Gangneung Coastal Cluster of venues, with a more informal studio featuring a communal feel boasting a wall of glass windows overlooking the happenings outside. The walls here are covered with gold-ish paneling and featuring long ribbons of video panels with multiple seating clusters arranged throughout the studio, allowing shots that are more intimate. Designed to be used for the network’s “NOS Studio Sportwinter,” a nightly interview program, the two hosts are joined by athletes and other guests in the 360-degree studio.

The informal and multiple tiers of seating give the space a casual, community-based feel and allow athletes not being actively interviewed to “hang out” in the background.

Other elements here include bulletin boards, curtains and small tables, along with small tchotchkes that represent each Gold Metal won by the Dutch. NOS also has multiple on-camera setups throughout the Olympic venues, such as travel-style desk at the Gangneung Oval, a speed skating venue.

Graphically, NOS has opted to use the OBS graphics package, including its open and matching insert graphics.