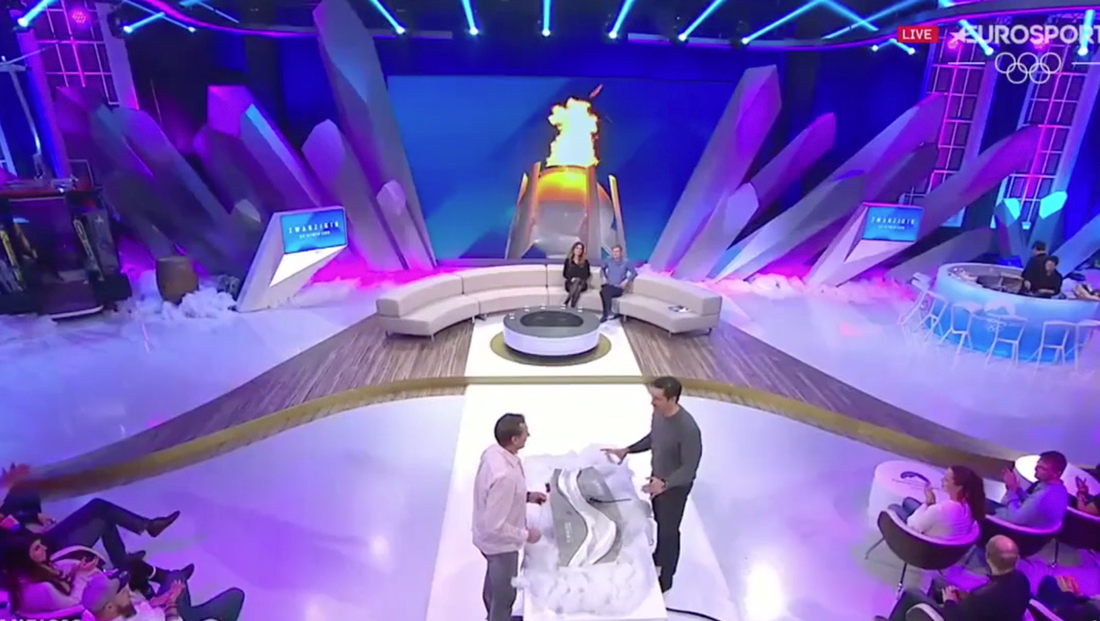 Eurosport’s “Zwanzig18,” a unique take on an evening Olympics show, is originating from a dramatic, colorful temporary set.

The show, whose name translates to “Twenty 18,” is hosted by Marco Schreyl and Julia Kleine from inside an event space called Ziegelei101 in Munich, Germany, and is billed as a mix of sports, comedy, games, talk and live music.

“Eurosport prepares the big moments of the Olympics for a new, wider audience and brings the Olympic day to a close in the studio in Munich with prominent guests from sports, shows and entertainment stations,” says the network. The show airs nightly on both German Eurosport 1 feed and German TLC. Rendering of the production design for “zwanzig18.”

The dynamic studio space, which was designed by Thomas Richter with art direction from Michaela Bochmann, is centered around a large video wall framed by oversized crystalline structures that jut out at dramatic angles. Two smaller structures with matching angles are cleverly designed as “stands” for smaller video panels. In front of the video wall is a large horseshoe-shaped sofa with circular coffee table.

On the left of the set is a ski lift gondola complete with faux wire supports, while a circular bar is set up to the right. Another key component of the studio space, which also allows the architecture of the event space to shine through, is a mix of audience seating.

Studio audience members sit in both riser-style seating and modern, curved chairs set up on the studio floor, directly flanking an open space used for demonstrations and other segments.

Placed throughout the space is a wide variety of dramatic, colorful lighting instruments which help separate the zones on camera.

Eurosport is not alone in producing light-hearted entertainment recap shows of the 2018 Winter Olympics, networks such as Norway’s TVNorge (a sister network through parent Discovery Communications) and Finland’s YLE also have similar offerings for viewers.