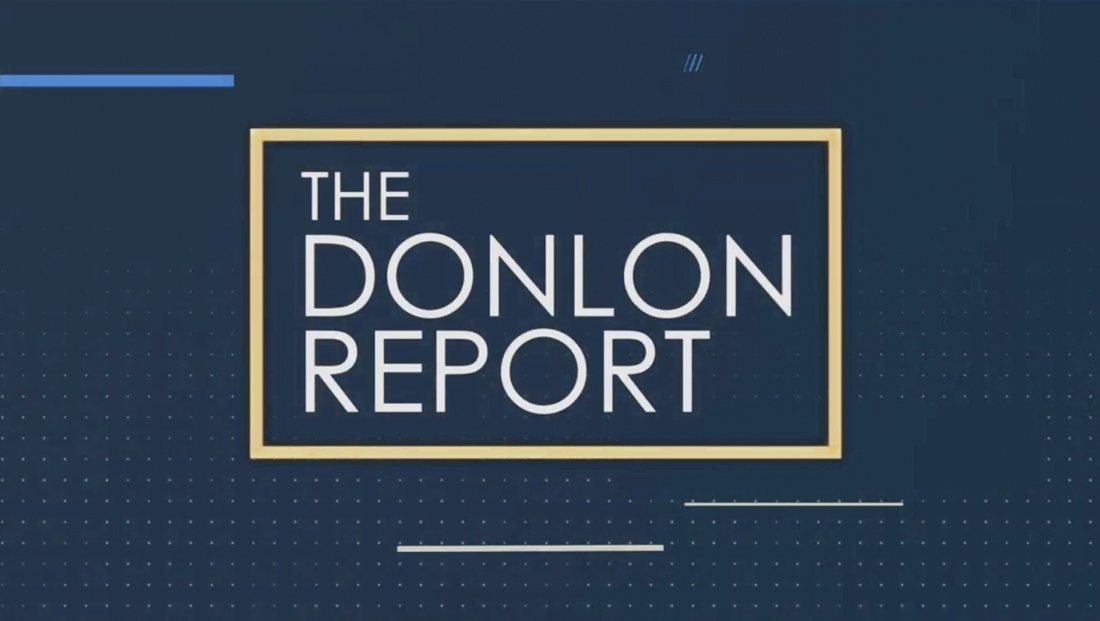 Immediately following the new hour called “NewsNation Early Edition” on the network now known as “NewsNation” is a retooled hour dubbed “The Donlon Report” that leverages a unique logo that adds a gold-yellow that manages to both complement the existing palette while also making a bold statement.

Hosted solo by Joe Donlon, who previously co-anchored the network’s originally three hour primetime block of news that ran from 7 to 10 p.m. eastern, the show is billed as a mix of analysis, news and interviews.

“Report” airs at 6 p.m. eastern, ahead of “NewsNation Prime.”

The show starts with the studio’s motorized six panel video array arranged in three groups of two — with each of the resulting zones showing one of three main topics to be discussed.

For the hour, Donlon sits mostly at the studio’s main anchor desk, which is relocated from the “Early Edition” position to sit in front of the set’s weather center.

His primary one shot is against the tall video wall installed between the two glassed-off work areas.

The glass that separates this part of the studio is opaque near the bottom and fades up to transparent, meaning anyone working back there isn’t as prominent (though they likely have to avoid walking from one side of the weather area to the other while Donlon is on camera).

Donlon’s one shot uses a fast, almost jarring push in at the top of the show and when returning from breaks before centering on him against the video wall background, which features a looped animation of a repeating pattern of the show’s name and initials set against a blue background, inspired by the original NewsNation graphics package, with lettering periodically becoming yellow.

That yellow is inspired by the show’s logo — with the words “The Donlon Report” set inside a box in a geometric sans serif rather than the typeface used on almost all other NewsNation graphics (the other new show, “Banfield,” also has a distinct logo).

For animated opens, rejoins and wipes, the yellow box animates in with angled ends and eventually shifts from the brighter gold to beige to off white, tying it into the NewsNation graphics package, which directly inspired the animations’ backgrounds. The package also uses angled hashmark accents.

Donlon’s position in the studio allows the six video panels to be combined into one to showcase remote interviews by positioning a camera off to one side, a must during the coronavirus pandemic.

The show also makes use of the multi-video panel wall on the opposite side of the six part array with floating walk and wander video on video topical shots.