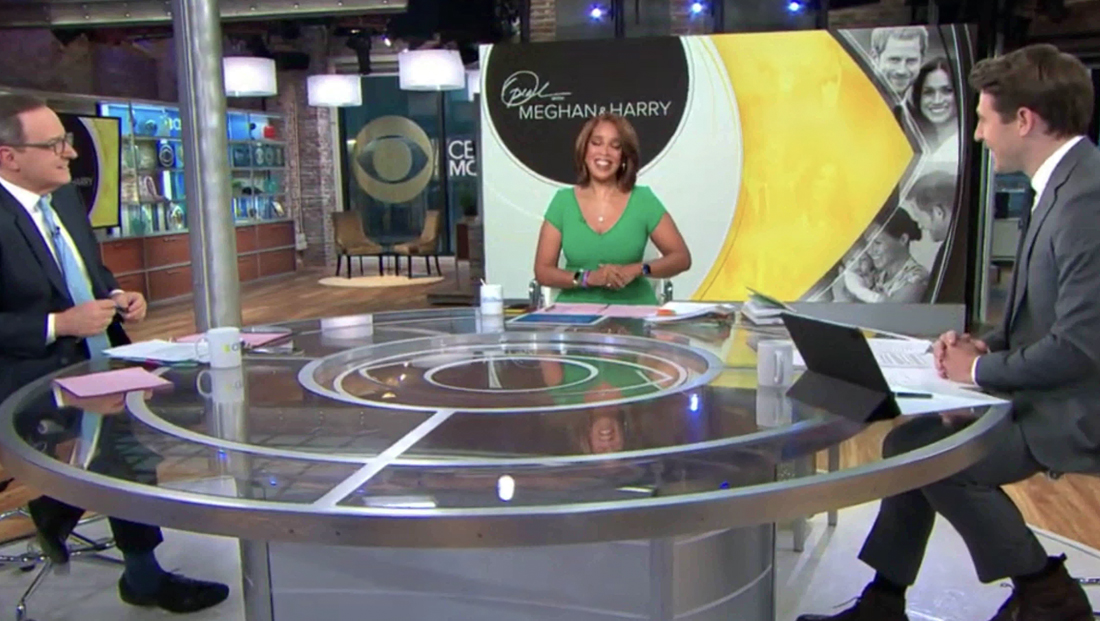 Oprah Winfrey’s interview with Meghan Markle and Prince Harry, not surprisingly, led and ate up much of “CBS This Morning” the day after it aired during a primetime special that was a ratings powerhouse for the network.

“CBS Presents Oprah with Meghan and Harry” aired Sunday, March 7, 2021, from 8 to 10 p.m. eastern, but, like any good broadcaster, the network held back additional clips to air on its third place morning show the next morning, March 8, 2021.

“CBS This Morning” lead with the interview under the label “breaking overnight,” devoting its entire tease block to it.

Clips also aired at both the start and end of the “EyeOpener” headline segment, and when the show opened on the wide shot of Studio 57, the various video walls and panels in the studio were filled with black, white and gold Oprah, Meghan and Harry branded graphics instead of the normal generic show look.

The graphics used oversized pieces of the CBS eye to showcase faded imagery of the couple.

On the primary video wall behind co-anchor Gayle King, who has close ties to Winfrey, Oprah’s iconic signature appeared in a black circle in the upper left.

Its positioning, assuming the circle is meant to represent the “pupil” of the eye, would have been a bit out of place (somewhat ironically, no pun intended, it even could be interpreted as an eye roll).

Other graphics included the black circle in the center surrounded by rings, a design that peeked through on the “exclusive” bar that the network added later in the show during an interview with Winfrey herself.

It also appeared in the background behind the double box layout used during Winfrey’s appearance.

“This Morning” did cover other news of the day March 8, including the senate’s passing of the coronavirus aid package.