Two of MSNBC’s weekend shows move to 3A 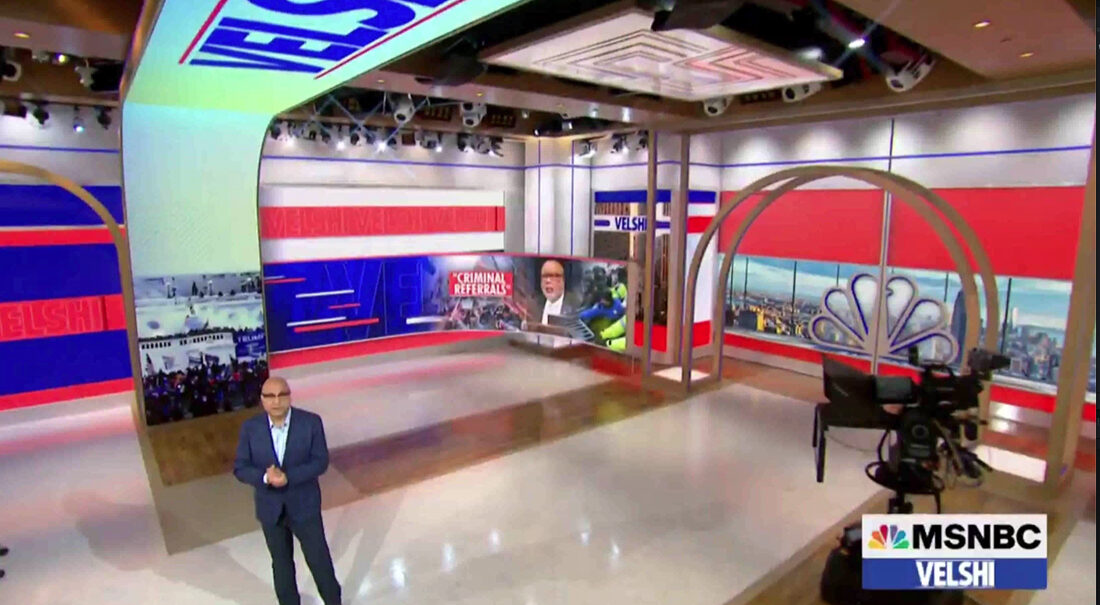 Two additional MSNBC shows moved into the renovated Studio 3A over the weekend of Oct. 2, 2021 — “Velshi” and “Alex Witt Reports.”

“Velshi,” which is anchored by Ali Velshi, uses its own standalone on set graphics and logo and does not brand under the “MSNBC Reports” name that the network introduced earlier this year.

The show’s red, white and blue look has been replicated across the video wall graphics and color changing backlit elements.

For its first edition Saturday, Oct. 2, the show primarily used the corner video vista wall and the portion of the LED ribbon along the north side of the space as well as the curved extension and large video wall installed nearby.

Many segments had OTS-style graphics shown on the ribbon, while the curve was used for additional looks.

For remote interviews, Velshi moved to the corner LED array and the network used a reverse shot to capture him seated, facing the video wall that was sporting a live image of the guest framed by blue and red graphics.

Additional shots included floating camera “video on video” shots with the studio’s wild monitor cart placed along the east side of the space, in front of the open “arch” and sliding peacock wall, which remained closed.

She primarily remained at the triangular anchor desk with the set extensions behind her, though one remote interview segment used the curved ribbon to display guests’ images with Witt facing them.

Her show also used the monitor cart in a similar position as “Velshi,” just rotated slightly off axis.