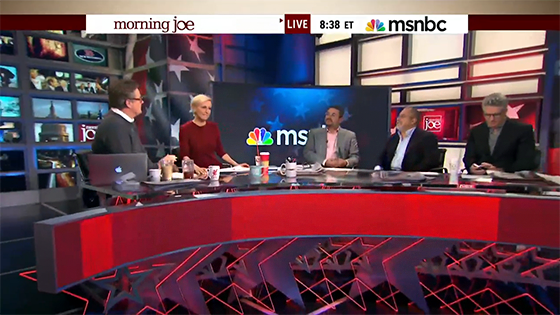 NBC News wants you to see stars this election night. After debuting a snazzy new star-shaped anchor desk on “Meet the Press” that will also be used for its election night coverage, the network’s sister cable network MSNBC is carrying through with a similar desk — and a new election night brand.

“Vote! 2014” kickoffs Tuesday night on MSNBC with a very decorated Studio 3A.

Images of flags, bunting and patriotic lighting adorn the studio, which includes two new desks designed by Clickspring Design and fabricated by blackwalnut.

The first is located by the studios RP screens and can seat up to seven, with a second smaller desk that can seat three located in the back of the studio. The desks design include backlit stars and an LED video area, one feature missing from NBC’s new desk. A third rear projection screen has been added to the studio, where one of the smaller insert sets is usually located. During “Morning Joe,” the new RP displayed loops of the “Vote! 2014” logo, and never had a true purpose.