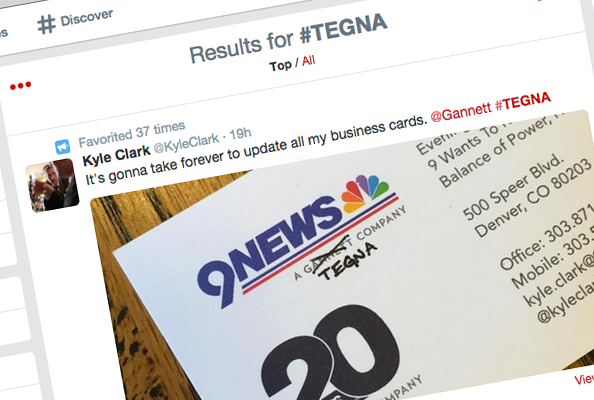 When you name your company “Tegna” you’re all but asking for the snark to start on Twitter.

Here’s some of the best:

The letters in the company name had to reapply for their jobs, and apparently only some made the cut. http://t.co/M0qF7aJvUn

It's gonna take forever to update all my business cards. @Gannett #TEGNA pic.twitter.com/Vgm5pAhm2y

if you had "#TEGNA" for the new name of Gannett's broadcasting and digital operations, you totally won

#Tegna = Gannett backwards, minus the duplicate letters, and put the "G" in the center (so we remember our roots).

Gannett names its broadcast spinoff 'Tegna,' which I believe was a Japanese movie monster http://t.co/hVuuie3JJG

Being half serious, wasn't Tegna the name of fancy dandruff shampoo> @Downpuppy @nswartsell

Won't you help us reach our goal of wiping out Tegna by the year 2020? #CompaniesThatSoundLikeDiseases http://t.co/Qj5mB57vFc

Oh ok, I figured it out. #TEGNA is a powerful hallucinogen.