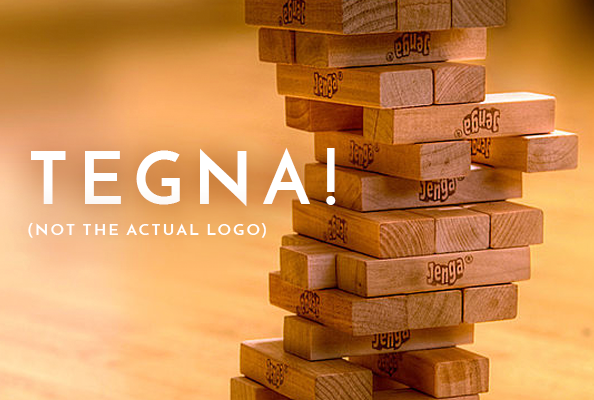 Gannett has announced the umbrella name for its broadcasting and digital businesses: Tegna.

“Tegna is a nod to the more than 100 year-old history of Gannett. While always reminding us where we came from, the new name also shows our innovative spirit and commitment to being a forward-looking company that empowers people, businesses and communities to grow and thrive,” Gracia Martore, Gannett’s CEO said in a statement.

What that “nod” is, exactly, isn’t entirely clear.

The best we could come up with is that if you shuffle the letters of “Tegna,” you can spell “Ganet” — which is sort of how a third grader might spell “Gannett.”

Jeremy Gaines, vice president of corporate communications, confirmed to the Washington Business Journal that “Tegna” is, in fact, an anagram of “Gannett” — but since there are two “N”s and two “T”s in that name, the company dropped one of each of them. It’s also been noted that “Tegna” is Gannett spelled backward with the duplicate letters removed and the “G” moved to the middle.

It’s worth noting that USA Today’s own report on the story just ripped Martore’s quote out of the press release with no explanation.

Gannett announced last year that it intended to split its business into two core groups — following the steps of other big names in media such as the Tribune Company.

We’re also not 100 percent sure how to pronounce the new name (maybe that’s the connection Martore is talking about — even employees disagree on how to say “Gannett”) — is it “Teg-nah”? “Teeg-nah”? “Tog-nah”?

We also want to keep saying “Teng-ah” — probably due to the soundalike popular game Jenga and hence the illustration above (we’ve since learned that Tenga is actually the name of an adult toy company (NSFW link).)

In another questionable move, the company has opted to capitalize the letters of its new name, a move that creates a prominent but ugly look whenever it’s used in text.

Both Gannett’s USA Today newspaper and NBC News’ “Today Show” alway insist on using all caps for its name, a style that we here at NewscastStudio always edit out. .

Since Gaines confirmed the name is an acronym of some of the letters in “Gannett,” we’re assuming it’s not an acronym for anything … though we’re betting the Internet will come up with some snarky backronyms in due course.

Tegna will be the parent organization of Gannett’s television stations as well as digital properties such as Cars.com. Anyone else looking forward to seeing how that will look in a newscast’s credits?

Is this the Tegna logo?

Meanwhile, the Gannett name will be retained for the division operating the 81 newspapers.

The Gannett name, unlike Tegna, does have a clear connection to the company’s history — it’s named for Frank Gannett, who founded the company in 1923 after he acquired a Rochester, N.Y. newspaper to add to the one in Elmira, N.Y. he already owned.

Gannett previously used a globe-shaped logo with a superimposed “G” (nicknamed the “Death Star” by some employees) until 2011 when it switched to simple blue logotype that it began requiring all of its properties to incorporate into their website or print designs, as appropriate.