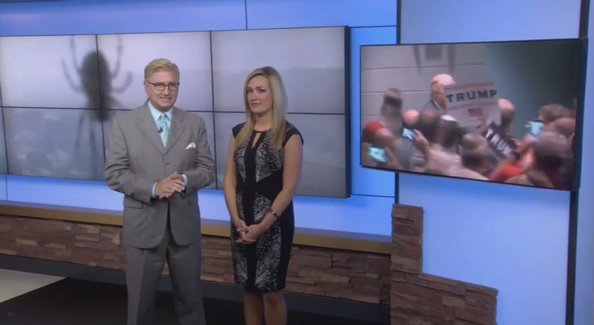 Charleston, W.V. anchors Stefano DiPietrantonio and Whitney Wetzel had an unexpected visitor to their newscast — and missed out on the entire thing.

After returning from a break and engaging in some innocent chit-chat about the weather, the anchors transitioned to discussing a politics story, but a video feed of the weather remained visible on the video wall behind them while an additional flat panel camera right showed a more topical clip.

Then a spider decided to check out the camera providing the weather feed — creating the illusion that a giant spider was “attacking” the camera.

The WCHS-TV anchors, meanwhile, remained unaware of their visitor.

Of course, “giant” critters invading video feeds isn’t anything new: A bee did it to an Indian forecaster, a seagull showed up on an Australian newscast and another spider visited a Chicago newscast. And a BBC set was visited by a normal-sized bird.