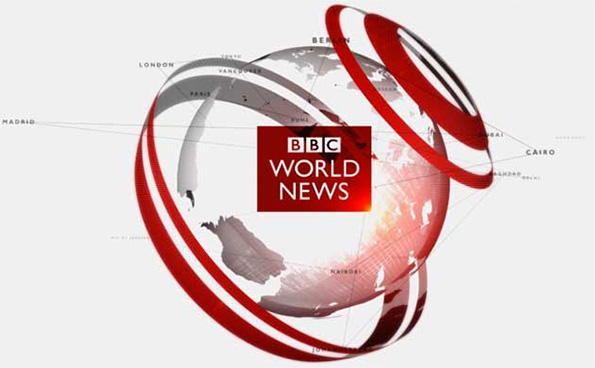 Just like pop music was never the same after The Beatles, news music hasn’t been the same since David Lowe. His tidy electronic grooves have been synonymous with the BBC News in Britain for over 15 years and have been copied throughout Europe. With Bloomberg’s overhaul, his signature sound can now finally be heard on an American newscast.

News music used to be very formulaic. The same instruments were always used in the same way. Horns played a short but recognizable melody, violins added some drama and timpani supplied the gravitas.

That also describes the sound of the BBC News until 1999. In that year they started to use Lowe’s electronic theme.

Lowe’s theme employs samples of actual instruments that are no longer recognizable as such. By combining, compressing and filtering snippets of sound, he creates something unique. The final product is sonically engaging and tremendously pleasing. Because the absolute perfection in the timing of every note is more than the most skilled instrumentalist can ever produce, it’s clear that it exists thanks to a computer.

Lowe was clearly not inspired by Beethoven but more by trance, techno and other music that would seem more at home in a nightclub. Yet the music managed to enhance the image of the BBC as the golden standard of broadcast journalism.

That’s remarkable because synthesized music used to be cheap to produce and as such more frequently heard on tabloid and overly sensational newscasts (think WSVN-TV in Miami).

The music that Lowe produced exudes authority because of its seeming simplicity.

Every hit seems functional, giving the music a sense of tidiness and restraint, that can be seen as a call back to the BBC’s disciplined journalistic standards. At the same time it sounds rather neutral. That’s crucial for a news theme. It serves as an introduction to both terrible tragedies and festive activities. Finally, it features the pips. Those short tones are a staple of European radio signaling the top of the hour and the start of the news.

Since the music debuted on the BBC, it has been copied by almost every single European broadcaster — sometimes blatantly so. Have a listen to the opening theme for the news on DR, the Danish Broadcasting Corporation. The theme, composed in 2010 by Steffen Breum, even has the same chord structure as the BBC theme.

Another example: the Antena 3 Noticias. The Spanish broadcaster has been using this theme by Pablo Cebrian since last year. It contains the pips and even something that sounds like a thunderclap, another recognizable element of Lowe’s music for the BBC.

Now that his signature music has arrived in the United States, David Lowe can truly be considered the person who has had the single biggest influence on news music.

Victor Vlam is the founder of Network News Music, a site dedicated to preserving news themes and promoting a greater level of appreciation and understanding of the art of news theme music