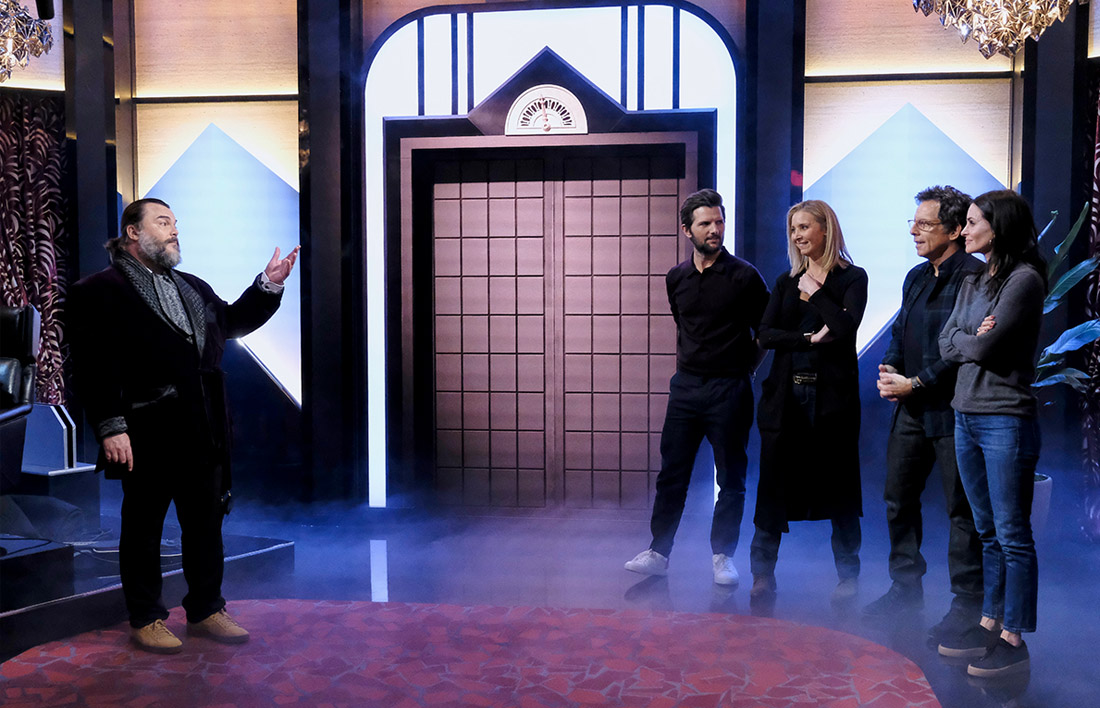 The scene: A mysterious hotel with an elevator with a mind of its own that whisks guests away to a random floor where, instead of a comfy hotel suite, they find themselves trapped in a maze of theme escape rooms.

It all started with Connelly and showrunner Lee Metzger tossing around ideas for what theme the series of escape rooms that celebs would “fight” their way through should use.

They came up with so many ideas — but knowing they would ultimately have to settle on one for the show, Connelley said he began to think of a massive hotel with an elevator that could take guests to any floor of escape rooms with almost every imaginable theme. 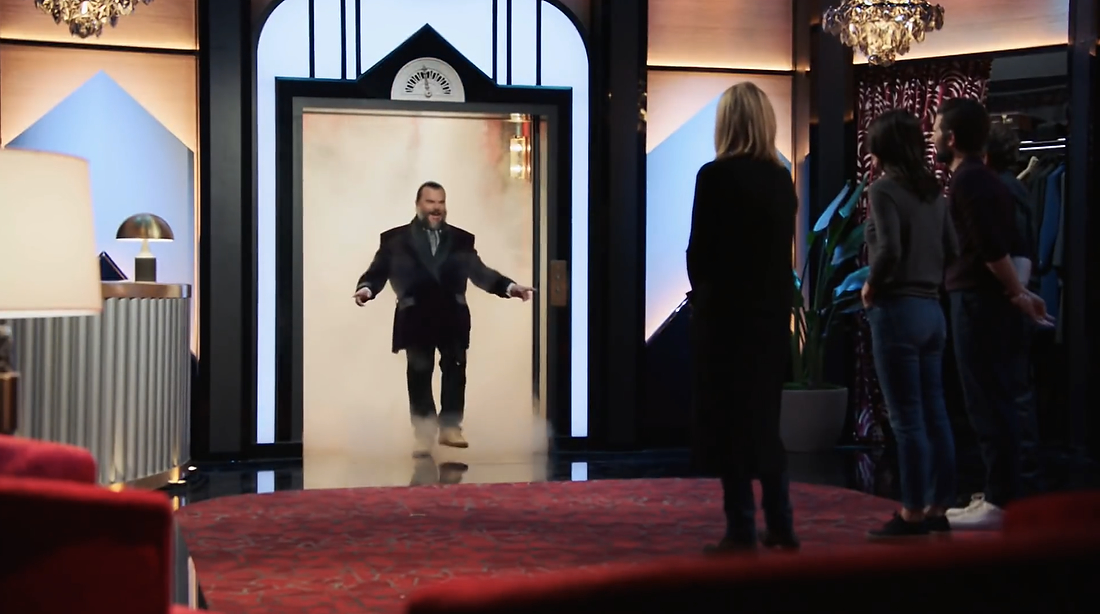 That elevator sits front and center in the “hotel lobby” set that “Friends” stars Lisa Kudrow and Courtney Cox along with actor Ben Stiller and “Parks and Recreation” star Adam Scott entered at the start of the show, which aired May 21, 2020, as the lead in for NBC’s series of programming to raise money for children’s charity Comic Relief. This special was filmed before the coronavirus pandemic. 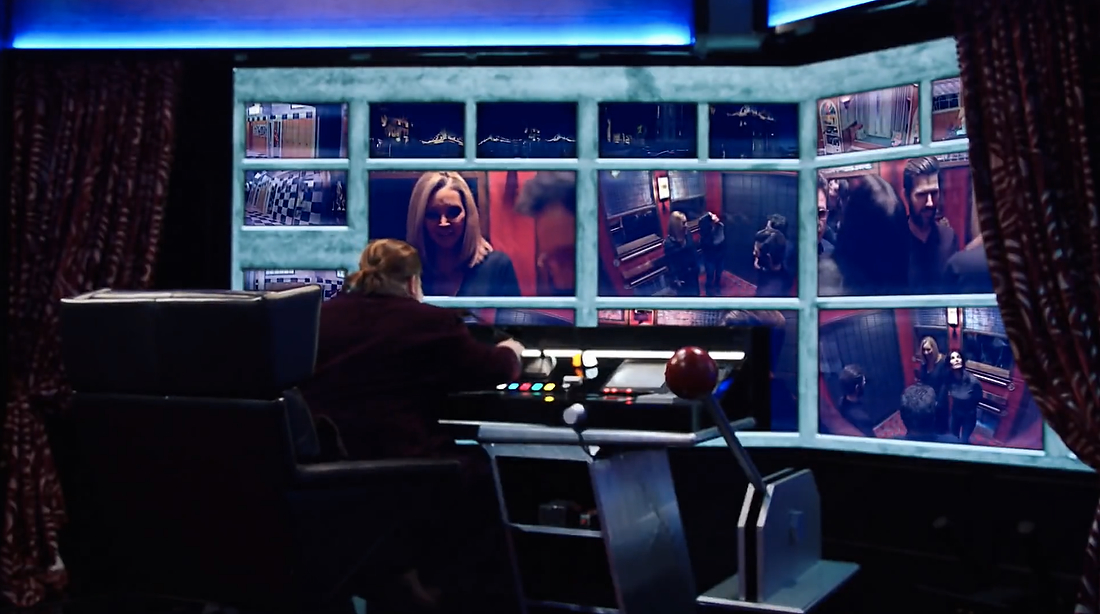 After being greeted by actor Jack Black, who was playing a sort of caricature of himself, the group entered the elevator while Black stayed behind at the hotel reception area — which magically became a tricked out command center with a slew of buttons, knobs (in the form a giant “red nose”), levers and other gadgets that went above and beyond a simple bell and reservations computer.

Black’s expansive console faced an LED video wall that, prior to revealing itself, was a wall of hotel room keys on hooks.

The hotel elevator didn’t actually move up and down — instead it was, like so many on TV sets, simply small, enclosed space with sliding doors. In reality, Black and the competitors always remained on the same level of Stage 26 at Universal Studios Hollywood.

However, this elevator mockup did come with integrated LED panels that were used to create the illusion of mesh openings that gave the celebrities inside a view of the elevator shaft walls zipping by. 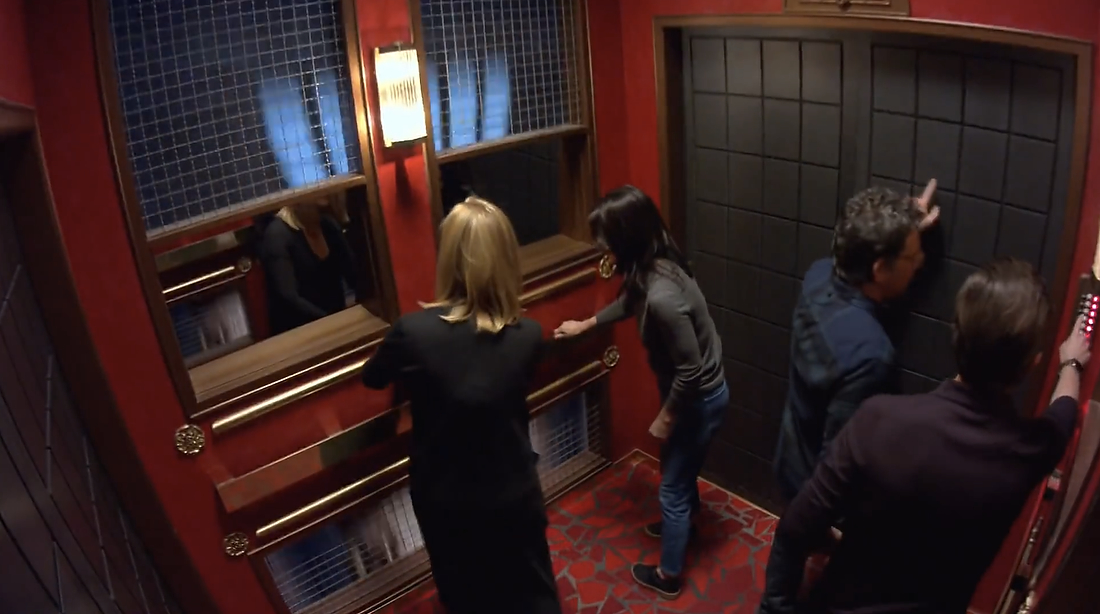 Other segments of the walls included one-way glass that served as camera blinds to capture the action from a variety of angles.

The hotel lobby and elevator were inspired by a visit Connelly, Metzger and Stiller, who doubled as a producer, took to Chateau Marmont hotel in Hollywood — including its art deco feel and real wall of room keys with red tassels.

Connelly snapped photos of the real hotel’s elevator and went right to work designing and building the faux one the same night while inspiration was fresh.

Back on the stage, once the elevator doors “dinged” open, the occupants were faced with their first of several separate escape rooms — and took a step back to the 1980s. In the true spirit of escape rooms, there will be limited descriptions of each room here — but you will be let in on the “secrets” of the design strategy and process.

The first stop was a 1980s “rec room” outfitted with a slew of authentic 80s props. Connelly says he “insisted” on everything being genuine in order to prevent the stage from becoming too “cheesey” or even mistaken for the 90s instead. 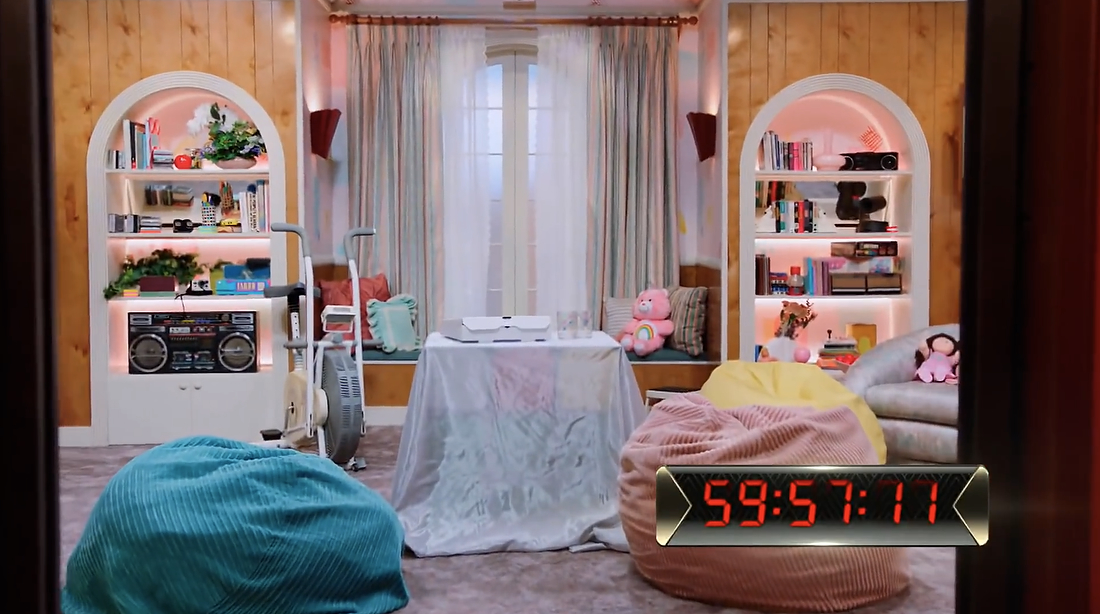 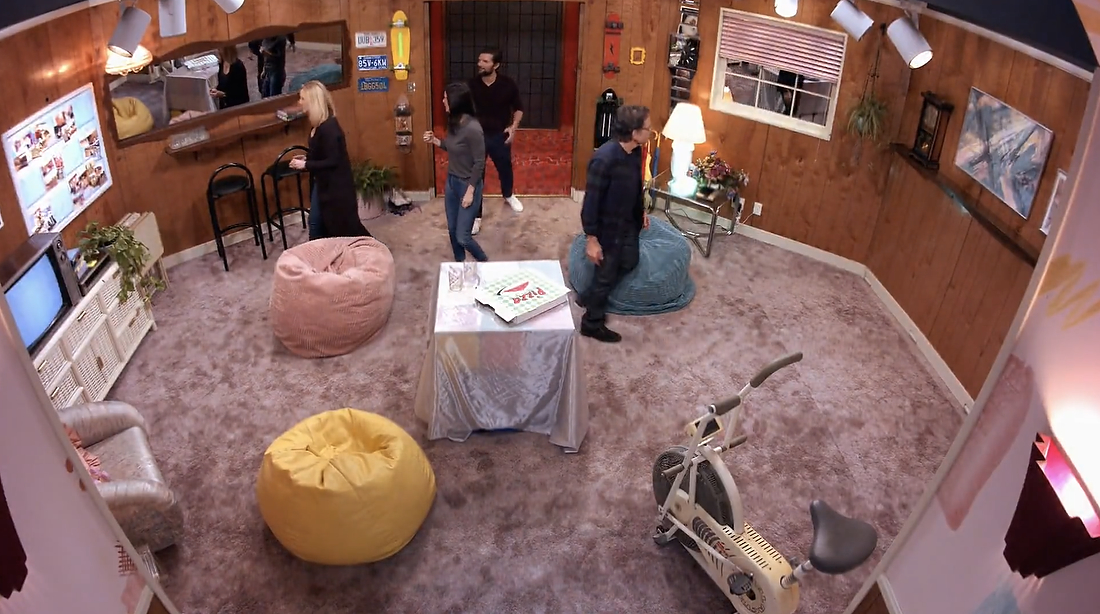 Connelly and his team also took to eBay to scrounge up authentic items from the decade after the network requested more 80s ambiance just days before shooting.

Some of the design elements included incorporating “easter eggs” linked to one or more celebrities that did double duty as both entertaining tidbits but also leaving the celebs wondering if they were clues to escape.

Many of these easter eggs as well as key gameplay elements — such as clues centered around players’ personal information — had to be added toward the end of the design process once the celebrity guest list was finalized. 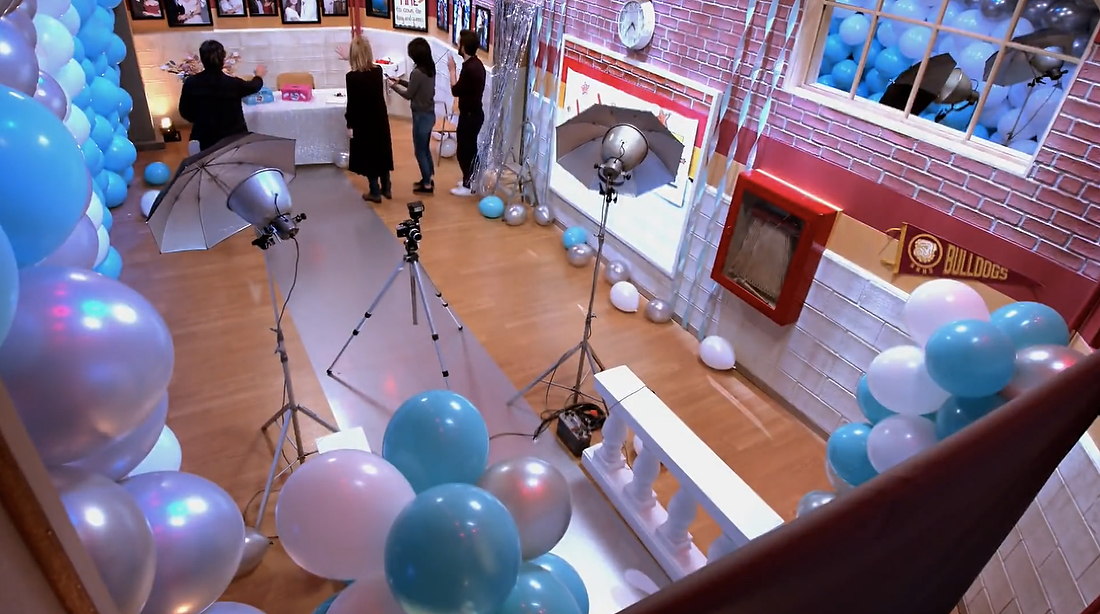 Once the general layouts were established, Connelly and his team focused on how to shoot it with isolated contestants and camera blinds.

“We then looked at different story options for the rooms and designed each room with the narrative through-line, style choices to give each room a look,” Connelly explained.

Next, the team decided what the games could be within those worlds.

Because the environments were 360 degrees and cameras needed to be hidden behind glass or worked into the scenery, each room was pre-visualized in Epic Game’s Unreal Engine, which gave director Alex Van Wagner the ability to review how shots could line up — and tweak things in realtime before a single wall was built. 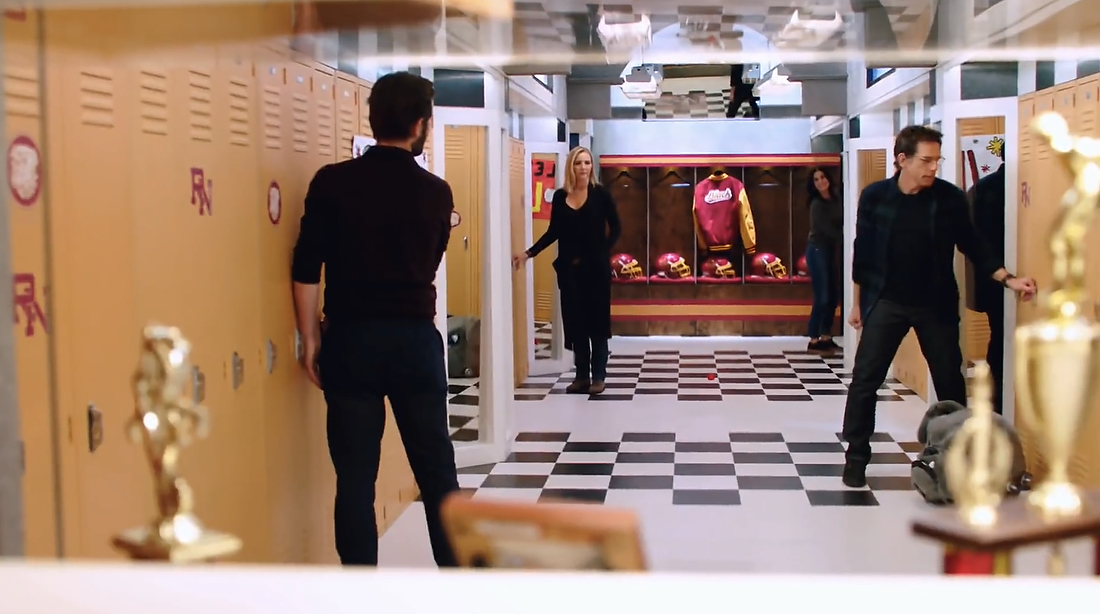 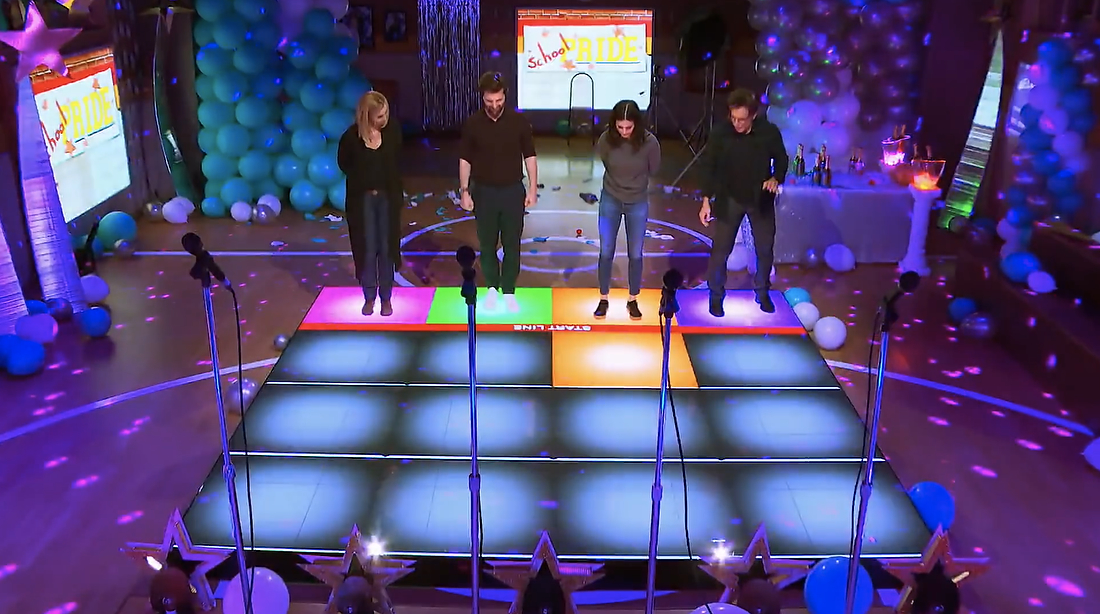 This included making sure that key elements of gameplay could be captured up close — whether it be locked down shots on the “answer” to the puzzles or camera blinds added in the walls or tucked behind furnishings.

During filming, Wagner orchestrated a camera crew that, while out of sight, were still vital to capturing all the action. These same camera operators were used in each of the sequential rooms — moving freely behind the walls as the celebs’ path moved forward.

In addition to the scenic environments, “Celebrity Escape Room” used the elevator theme in its open and title screen as well as bum-ps and rejoin graphics — which also included mysterious music and mechanical sound effects. 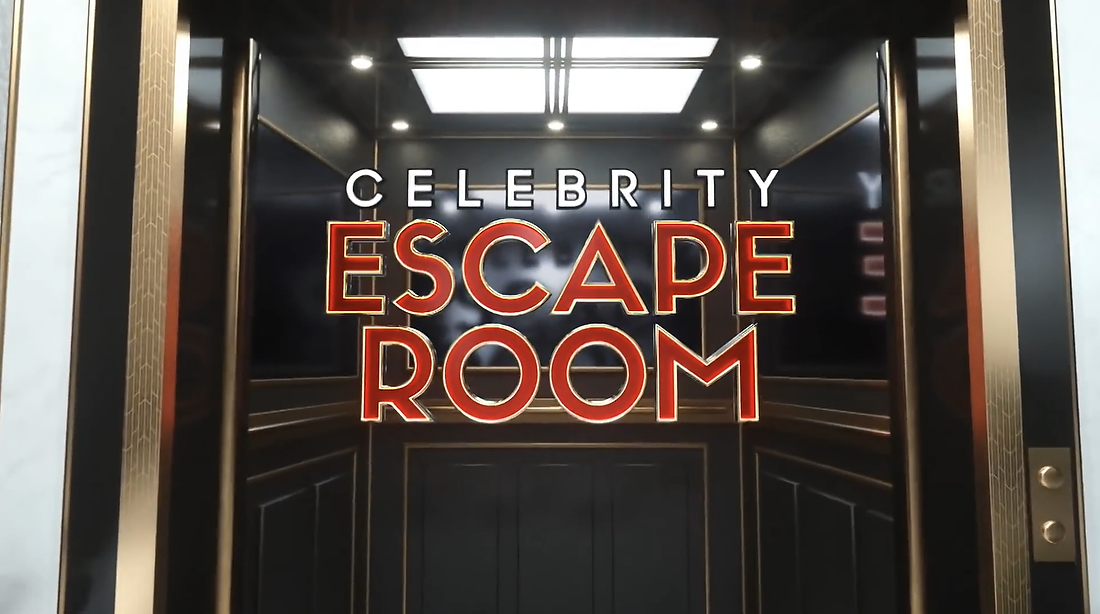 Additional, rougher, 3D “renderings” of each room also gave viewers hints about how each room would be solved — though the answers were never “given away” outright.