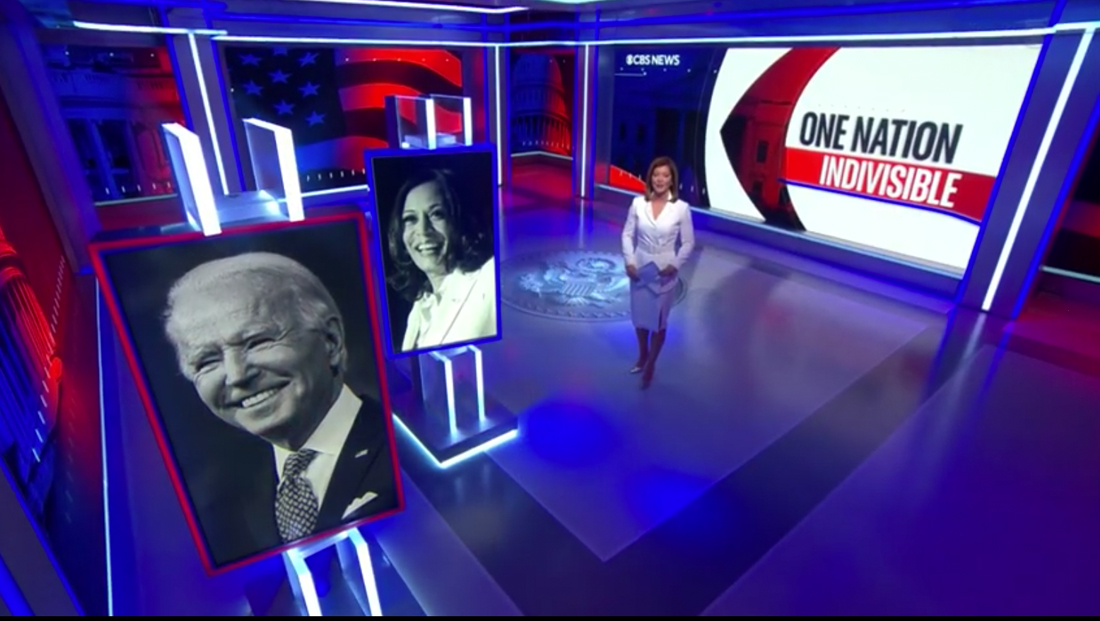 Anchored by “CBS Evening News” anchor Norah O’Donnell, the special included a look at the transfer of power from Donald Trump to President Joe Biden Jan. 20, 2021 and the challenges the nation is facing.

The special originated from the Washington set that is shared by “Evening” and “Face the Nation” (it was also used by “CBS This Morning” earlier Jan. 20) but with a decidedly darker and more dramatic look by CBS lighting director Izzy Einsidler.

Normally the studio is relatively bright — but for the 8 p.m. eastern special, the lighting was decidedly darker and much of the silver metallic surfaces were washed in blue, while portions of the floor, especially the corners, received red treatment.

The special also opted not to use an anchor desk or the studio’s video tile riser, though the presidential steal floor decal seen earlier in the day remained.

O’Donnell stood for the entire special nearby vertical video panels with mobile, edge lit glass bases — one lit in red, the other blue.

The lighting on O’Donnell herself was also more focused — with more light directed at the upper portion of her torso and head.

The special’s open used elements from the ribbon-inspired look the network unveiled for the occasion, though darker background elements were blended in along with oversized 3D CBS eyes that served as the “frames” for imagery and pathway for the ribbons.

Similarly, the studio’s video wall graphics used white to create a focal point but then used deep blue, red and violet gradients along with patriotic imagery to blend in with the more subdued studio lighting.

The special filled the 8 to 8:30 p.m. half hour before the multi-network “Celebrating America” special ran, and we’ve included looks at NBC and ABC’s special opens below as well.

Correction: This story has been updated to identify the correct lighting designer for the special.