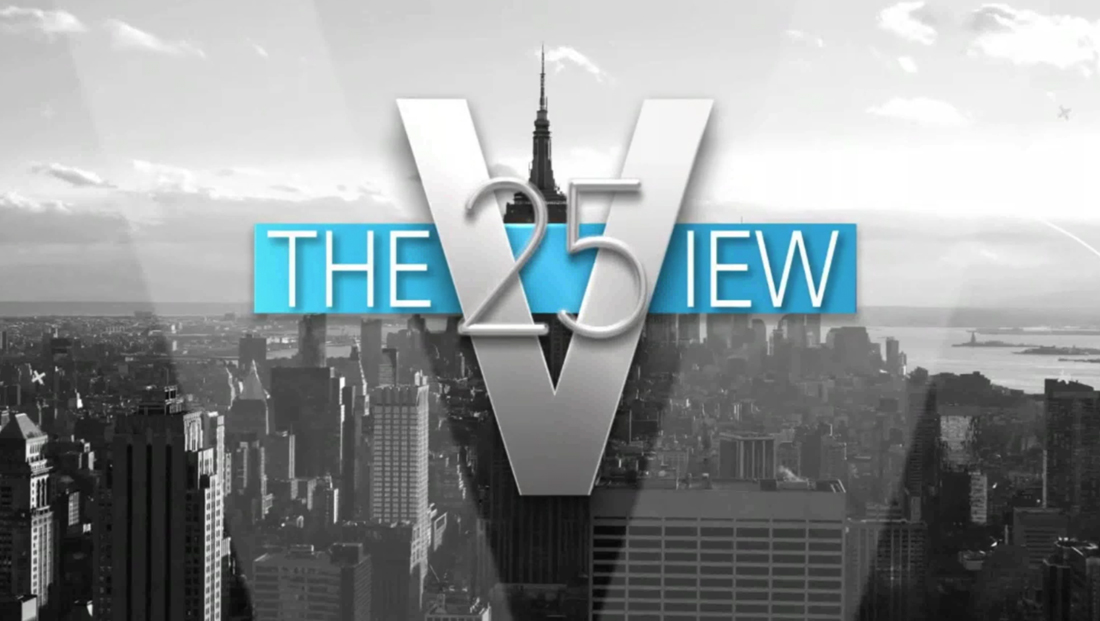 As previously reported, the show has a new logo and the oversized “V” from it serves as the revised bug in the lower left of the screen.

The network bug, which, like most other network level programming, has been updated to the new ABC globe logo, is also used throughout the show, with the hashtag below.

The show’s updated look centers around a bright blue shade accented with black and white and monotone imagery, including a stylized cityscape that’s now fed to most of the on set video panels.

The studio itself has had minor decorative updates, but largely remains the same as before.

Also updated is the talent footage, which moves away from the loft view previously used in favor of focusing on the hosts themselves in both heavily retouched portrait style imagery with “behind the scenes” style footage from the photoshoot.

For group shots, the hosts are pictured interacting with each other or seated in front of the latest version of the show’s iconic table.

The show’s co-hosts, who are all back in the studio for the first time since the coronavirus pandemic began, sat around an updated table with the distinctive folded down “leaf” sporting the horizontal version of the show’s new logo (a previously released promo showed the desk with the old logo).

Lower third graphics, like they have previously, jut out from the right side of the “V” bug in a white gradient and can be used for both identifiers and topical banners.

The bug can, also like before, be sub-branded, such during the show’s popular “Hot Topics” segment.

“The View” lost its most conservative voice, Meghan McCain, at the end of Season 24, as has not named a replacement for her, but is slated to feature a rotating cast of more right-leaning guest hosts during the coming weeks.

The show also returned to having a studio audience, but at reduced capacity. It also appears that masks were required.