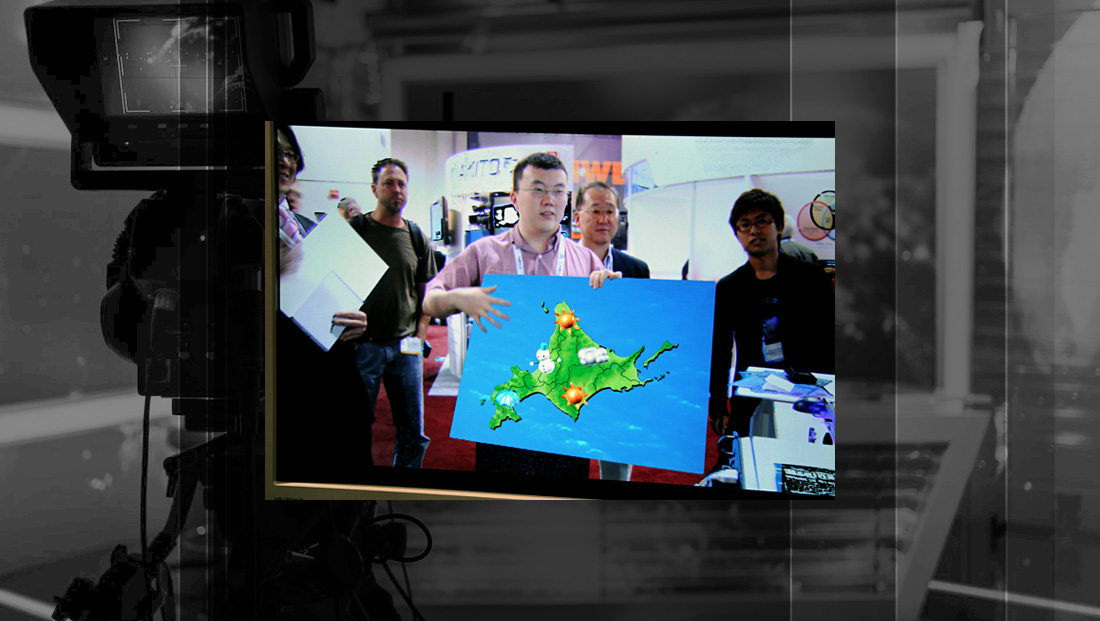 The system is dubbed as a “markerless camera tracking system” adds some exciting new dimensions and possibilities to the world of 3D news graphics. The system doesn’t require any senors and therefore is highly portable.

In our demonstration, poster-board size sheet of material was utilized. One side was white while the other was a green hue. The systems tracks the X, Y and Z axis simultaneously and, in this demo, creates the illusion that on-camera talent is holding, for example, a weather map. The system also allows talent to interact with the image and point to specific elements. Other variations created the effect that I was holding an object or a 3D airplane was circling around my body, with its flight path instantly adjusting as I moved the material.

At the core of the technology is pattern matching. The system can be programmed to recognize the unique border of the foam board above, though this isn’t the only pattern that will work with the system.

Full chroma key wall implementations are also available, though the free-standing map concept could have some very interesting applications for television news in such areas as maping, 3D models and charts and graphs. It was particularly interesting to see how the object “laying” on the sheet of board I was hold adjusted to various perspective shifts.

One feature I noticed is missing from the system is the ability for talent to have more direct interaction with elements on the virtual object. For example, it would be interesting to see the possibilities of being able to “grab” a virtual sun on the map and drag it to another location.