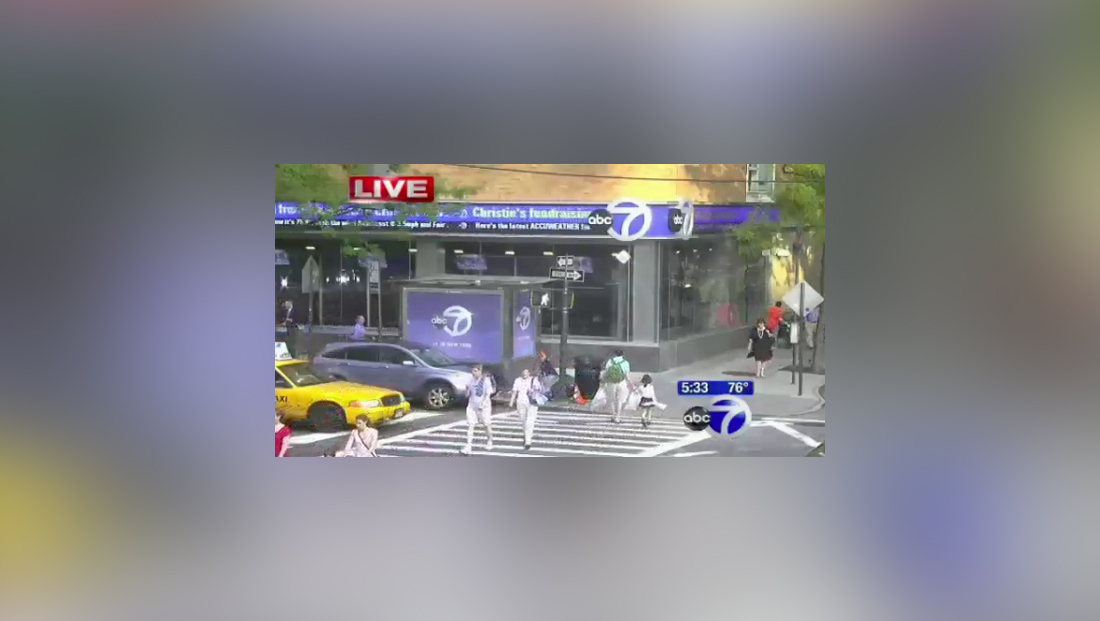 The studio, located at 66th and Columbus, is the only streetside studio in New York City used for local news. The facility is located in the same complex as the station’s newsroom and former studio, as well as work and production spaces for various ABC and Disney-produced programs.

It is interesting to note that the set doesn’t use the windowed walls as its primary background, though there does appear to be a small standup area with an LCD stack in one corner. The set is fully stocked with an impressive array of technology. The main anchor desk not only has a video wall behind it, but is also fronted with multiple video panels as well as a dimensional logo. The weather center includes an interactive “Big Board” that allows forecasters to take a hands-on approach to presenting the weather. The weather center itself features a bold, clean look of rich, backlit blue panels. Monitors are subtly inset behind the wall, giving a seamless appearance, while an L-shaped presentation and work area is banded with a bright yellow strip and includes a flat panel OTS monitor. A unique feature of the set is a ceiling-mounted, sliding camera that offers a bird’s eye view of the set. In addition to the news areas, the studio also includes a multipurpose interview set, also backed with a video wall. The station plans to use this area for both news reports and weekend public affairs programming.

This new studio is a big move for WABC-TV. The station’s news set previous shared a studio with “Live With Regis and Kelly,” a somewhat awkward arrangement that required the station’s “Good Morning America” cut-ins to originate from the newsroom. The fact the shows shared space was especially evident after the May 27, 2007 fire on the WABC-TV set that required “Regis and Kelly” to originate from an alternate location due to heavy damage to the studio.

WABC-TV has offered up a video tour of the studio: