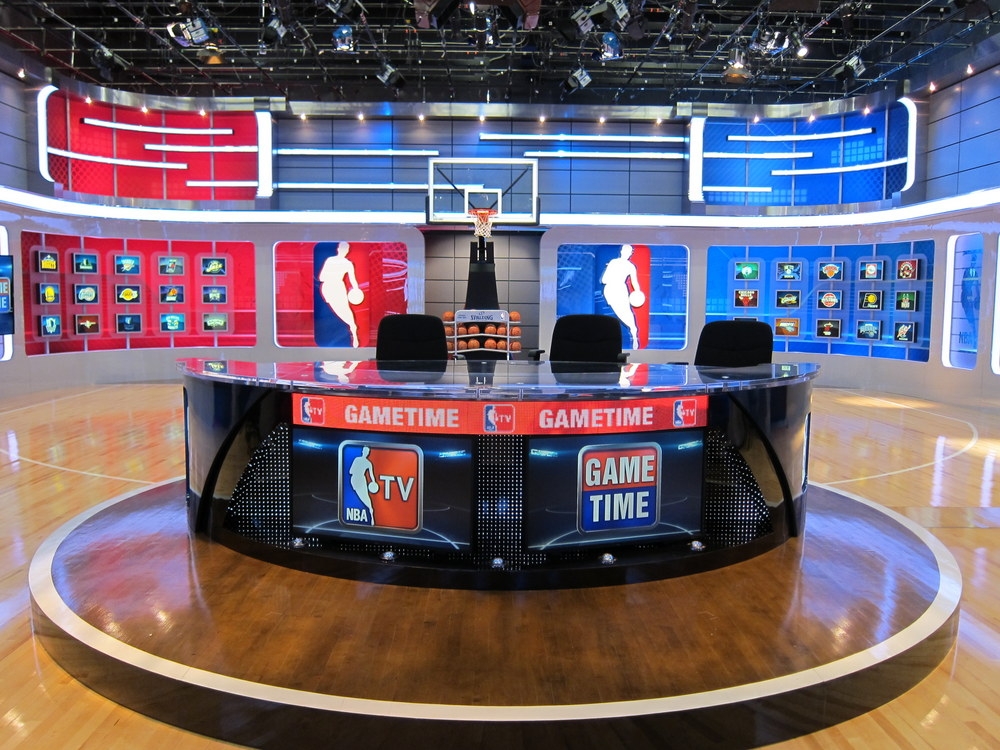 When the NBA tipped off this season, NBA TV was ready with a 5,000 square foot upgrade courtesy of Innovative Show Design (ISD).

“NBA TV wanted a technologically advanced studio that would appeal to the player of today and their audience,” said Justin Garrone, artistic director for ISD.

Launched in 1999, NBA TV is the cable home of the National Basketball Association. Currently under the direction of Turner Sports and NBA Digital, the network airs games, studio shows and lifestyle programming based out of Turner’s Atlanta studios.

For the start of the 2012-2013 season, NBA TV saw the need for a more contemporary setting.

The sport had evolved, and so had studio technology. NBA TV wanted a technologically advanced studio that would appeal to the player of today and their audience.

NBA TV’s requirements, however, were unique. They needed to film multiple shows daily from the same hub with each having its own signature design. The solution was creating a 360 degree studio that allowed for multiple locations and setups with color changing LED technology.

“It is critical for our process to communicate with our clients, to understand even the subtle nuances of their project,” said Christopher Runnells, president of Innovative Show Design.

ISD was no stranger to television sports scenic design, having just completed their second Super Bowl for NBC, in addition to sets for “ESPN’s Worlds Series of Poker”, “NBC Sports Talk”, and “Costas Tonight”.

When awarded the opportunity to propose a design, ISD sought to create an environment that encapsulated the glitz and glamour of professional basketball. The ISD team responsible for the design, Chris Runnells, Justin Garrone, Mark Dowling and Nate Mitchell, felt the primary element the studio should embody is motion.

“As basketball evolves, the NBA’s influence has begun to drive culture. We wanted the studio to speak basketball as soon as you saw it,” said Garrone.

ISD built on the motion of the game and the NBA’s color palette to create this effect.

The studio was then split into two sections, representing the two conferences in the NBA, blue for East and red for West. And most prominently, the demonstration area of the studio is based on a regulation half court, complete with goal, allowing NBA stars and analysts to illustrate scale and perspective on air. The end result: A sleek studio that represents the dynamic movement and energy of the NBA.

“They captured my vision for our set with exact detail,” said Brent Berkman, NBA TV coordinating director. “The team was enthusiastic and each member of the ISD team provided personal attention to the project in all phases.”