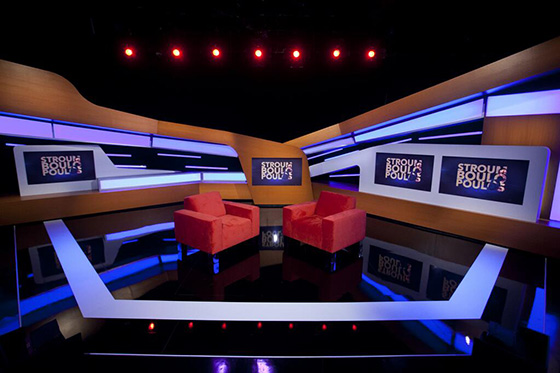 With a mouth full of a name that’s very similar to another famous TV news personality, George Stroumboulopoulos hit the US airwaves after many years of interviewing in Canada. Featuring a studio audience, the show is a move into a warmer and gentler direction for CNN. We’ll see how long this lasts and if Americans can grasp his name.

Stroumboulopoulos and his guest takes center stage in two bright red chairs, which actually look a bit cheap compared to the surroundings.

Overall, the set is different for CNN.

Out is metal, in is wood. This is CNN’s second set under new boss Jeff Zucker, so we’ll see if they continue to grow warmer and friendlier, adopting more a look ala CNN 2003-2008.

The set was designed by Jeff Hall Design.