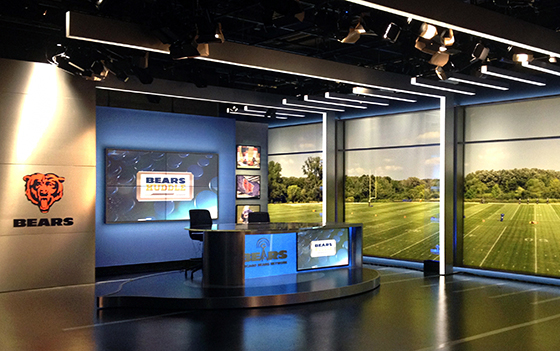 As the 2013 NFL season kicked off, the Chicago Bears Network moved into a state-of-the-art broadcast studio at Halas Hall, the teams headquarters.

The 2,300 square foot studio was designed by Peter Provost of Provost Studio, a cross-disciplinary design firm that works on both television and commercial architectural projects.

Connected with modern technology and Chicago Bears heritage, the studio was designed to accommodate multiple shows that air on both network television and internet platforms. Shows broadcast from the studio include: “Bears Gameday Live,” “Bears Gamenight Live” and “Inside the Bears.”

The studio is split into two halves, like a football field, with a main anchor desk and an informal standup area on opposing ends. The two halves are tired together with a 48 foot-long backlit graphic wall that shows the Bears practice field. A LED header intersects the wall, creating a floating NFL yard line marker.

Prior to the new space, the network was operating in the lower basement of Halas Hall, not originally designed as a production studio.

The design was a team effort of:

Design with a Legacy

“A main overall creative goal for the project was to develop a scenic environment with a level of authenticity and an insider perspective that speaks to the place of Halas Hall and the legacy of the Chicago Bears brand,” said Peter Provost. “One exciting scenic element that largely helps to achieve this vision is a 48 footlong graphic wall featuring a panoramic view of the team’s practice field, a perspective rarely seen by the general public.”

The informal stand up area is modeled after the newly renovated facility and incorporates actual full-sized lockers and equipment provided by the team. Historic photos line the space, adding a touch of history to the design.

“Flexibility was also paramount for the new studio,” said Provost. “Both scenic elements and technology help to easily reconfigure the studio for each program format and show specific graphic package.”

The main anchor desk was built with flexibility in mind. Since the studio is used for a variety of shows, the desk can accommodate a range of host/guest seating configurations and can rotate 180 degrees.

The new facility officially debuted in October 2013 and has logged hundreds of hours of use so far.