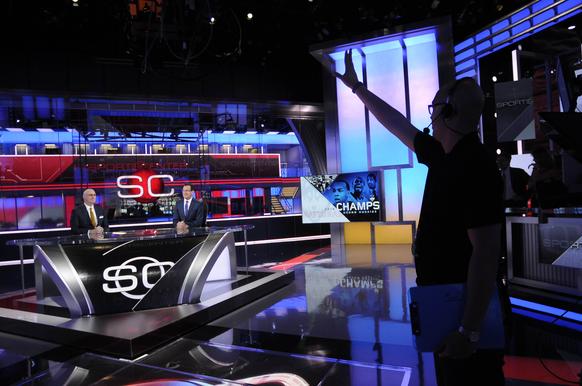 The 200,000 square foot building is home to the network’s flagship “SportsCenter” broadcast as well as four additional studios.

The centerpiece of the building is the new set for “SportsCenter,” a square shaped wraparound studio with a newsroom on one side and large scenic walls on the others. These walls incorporate metal and video panels in a variety of configurations, including motorized elements that can be reconfigured easily.

Overall, the set is very similar to the animations released just about a year ago. Of course, some details have been refined and tweaked, such as the corner elements which, in the finished set, are more light and airy and feature video panels offset on the wall rather than in the center.

The new set keeps some of the previous “SportsCenter” set’s rich red and blue tones, but mixes in more sophisticated blacks and grays as well as some lighter, airier colors. Perhaps the most notable difference is a more open and less restricted feel than the old, metal- and glass-heavy enclosed set.

The network’s NFL programming will move to the facility in late summer.

The facility was built with a variety of government assistance, including loans and tax credits.

Visit the Hartford Courant for a complete 24 photo gallery of the new facility.