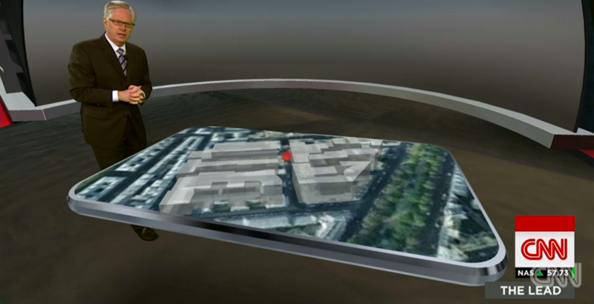 CNN utilized its virtual set technology to give viewers a bird’s eye view of the events surrounding the Charlie Hebdo attack, including integrating surveillance camera footage into the experience.

Tom Foreman, who typically presents from the chroma key studio, showed viewers a virtual map of Paris that was laid out in front of him, seemingly floating in midair.

As he discussed the geography, the map moved around to focus on different areas of the city and further morphed to include 3D buildings.

Forman then used the virtual environment to show video clips from separate surveillance cameras, with a yellow icon used to illustrate the angle the camera points.

Meanwhile, behind him, another virtual panel showed the footage captured by the camera.

The remainder of the virtual environment included some structural elements.