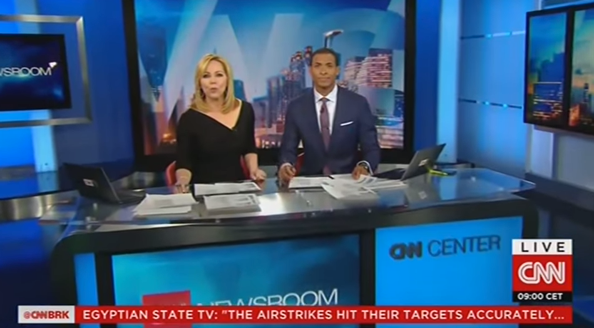 CNNI unveiled a new look for “Newsroom” that sheds the extruded 3D in favor of a simple, clean one.

The new look features a dominant blue background with the word “Newsroom” subtly blended into the background.

The show’s logo also now features simplified typography with just the network’s logo in a red box followed by the title on a single line (as opposed to the overly glossy, extruded logo that was previously used). The show’s set remains the same, with a bit of new framing and a new background. Gone is the curved virtual monitor wall, in is a skyline view of Atlanta with the “Newsroom” logo overlaid.

The revamp is in stark contract to the US version of “CNN Newsroom,” which features a rather over-the-top look that we compared to the graphics of The Onion’s Onion News Network when it debuted in 2012. Look of “CNN Newsroom” in the US

Watch the video of the new open: