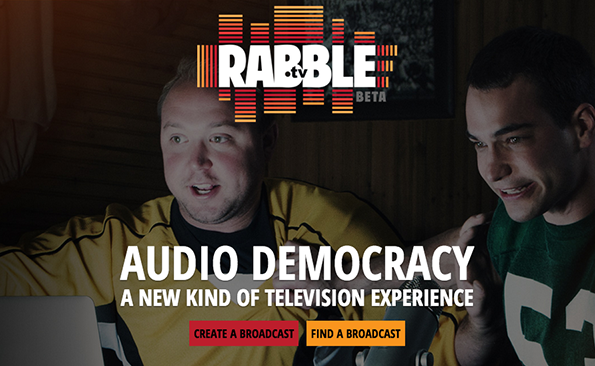 We all have our favorite sports teams, and well, sometimes we think the broadcasters just aren’t big fans of the team. Whether it’s the Cardinals or the Cubs, the Lakers or the Knicks, a lot of people think announcers are biased.

Launched last week, Rabble allows users to custom create their own audio feed for broadcasts, from sports to entertainment. It’s what happens when you mute the TV at home.

“There’s a groundswell of sports fans who are tired of national sportscasters spouting cliches as they emotionlessly call games that matter to us,” said Ryan Tyrrell, a co-founder of Rabble. “Rabble allows fan to take charge of their game experience. It’s audio democracy.”

The premise is simple, download their app on your mobile device, then stream your version or audio of the show. When we demoed the app at NAB, it was in use for sports events and even by a fan of “Diners, Drive-Ins and Dives” on the Food Network. Users curate their own broadcast, choosing who to root for and what to say, creating a democratized re-broadcast.

So far, the second screen app has had a modest launch, but with the right content partnerships it could be a bit hit. Imagine if a baseball teams radio station could be streamed on the app side-by-side with the live TV feed?

Maybe someone is already creating an alternate audio feed for a local newscast?