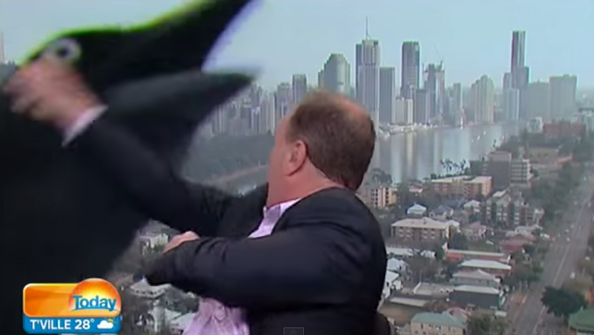 Australian sportscaster Robert “Crash” Craddock was wrapping up an appearance on Nine Network‘s “Today Show” when a curious bird decided to poke its head into the view of the camera feeding the video background behind him.

The results were, of course, rather entertaining. Craddock actually didn’t seem to notice the critter until one of the show’s anchors helpfully pointed it out. At that point, Craddock, turned around and, spotting the bird, began feigning punches at it and even tried to “run” from it. Thankfully the bird attack was just an optical illusion, since Craddock was “tied down” by various wires, presumably for his microphone and IFB.

A fellow Aussie anchor fell victim to a similar incident back in 1999, while, more recently, a team of West Virginia anchors were “attacked” by a giant spider.

By the way — is it just us or is there something oddly creepy about birds and their beady eyes?