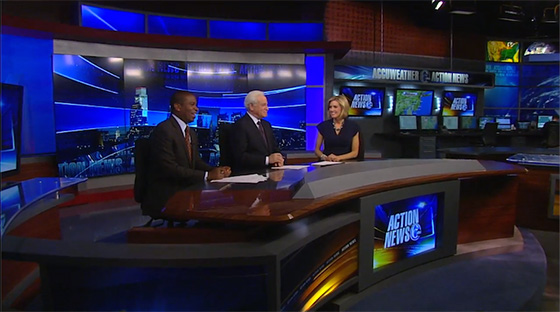 It’s survived over 40 years — through 10 presidential election cycles, the fall of the Berlin Wall and 20 Olympiads.

So it’s safe to say WPVI-TV‘s, the ABC O&O in Philadelphia, iconic “Move Closer to Your World” theme song is pretty much a part of the city’s history.

The song originally debuted back in 1972 with musical backing by the London Philharmonic Orchestra and vocals from the Hillside Singers (also known for a famous Coca-Cola commercial), according to a Billy Penn blog post.

Not only is the song unusual in that it has over 40 years — but it’s also one of the few news themes in the U.S. with a full vocal track. The station does use non-vocal cuts of the music, mainly in news opens and the like, but it still runs long credits where the full version is played over imagery from around Philadelphia.

The station attempted to change the music in 1996 — citing the fact that audio quality wasn’t up to par with modern technology, and reportedly spent $20,000 having the London Philharmonic re-record the music.

That song was used for just three days before the station switched back to the old version after being inundated by viewer complaints.

Though the switch was done with all the right intentions, the station clearly underestimated the loyalty the previous version had. Interestingly, WPVI-TV has been a station that’s been somewhat resistant to change — it was still using painted weather maps with handwritten labels stuck to the wall for years after chroma key walls had become standard.

And, although it’s been through several different sets, the blue background has remained a fixture for decades — though it has slowly evolved to feature more texture and typography until finally making the switch to a video wall in 2014.

Listening to the music today, it definitely lacks the crisp audio quality we’re used to hearing today and the lyrics may border on corny to some, but the song definitely has a place in the hearts of the station’s viewers.

Incidentally, WNEP-TV, the Tribune station a few hours north of Philadelphia, uses what’s popularly referred to as the “dance mix” version of “Move Closer to Your World,” albeit sans lyrics.

For more on the history of “Move Closer to Your World” at WPVI-TV, including quotes from the station’s anchors, click here.