Tonight at 6: ‘Is your couch killing you?’ 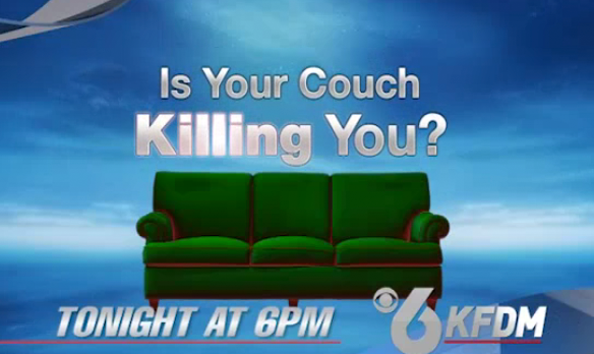 Having apparently run out of mundane topics such as toxic mold, Tasers, school lunch caloric counts and killer bees, KFDM-TV has decided make its viewers scared of something, quite ironically, they probably sit on while watching the station’s newscasts — their couches.

Yep, that’s right. Sinclair’s CBS affiliate in Beaumont, Texas, has been running breathless promos about a hidden danger lurking in your couch — a flammable material banned in the 1970s but still around today.

As if a overly peppy clown-like person (?) with creepy doll on an ugly grandma sofa isn’t enough of a reason to get people scared of couches…