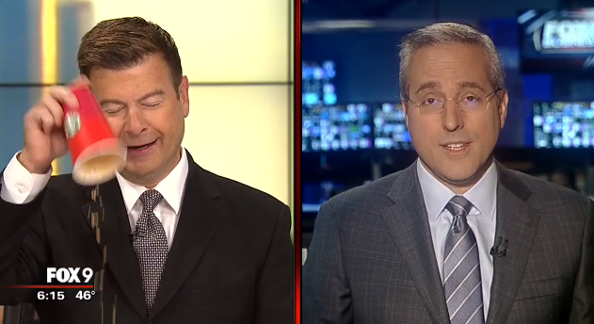 KMSP-TV anchor Tom Butler joined religious groups upset about the new red Starbucks cups. Butler didn’t have an issue with the design, though, his complaint was that it was empty — or so he thought.

As the Minneapolis–St. Paul anchor was wrapping up a segment with Fox Business reporter Adam Shapiro, Butler held up a red Starbucks cup and said, “What ticks me off about this cup, Adam, is that there’s nothing in it,” as he took the plastic lid off and turned it upside to down to prove his point.

That’s when the remains of someone’s coffee spilled out of the cup over the anchor desk.

As Butler tried to clean up his mess, Shapiro laughed and attempted to barrel through making another point.