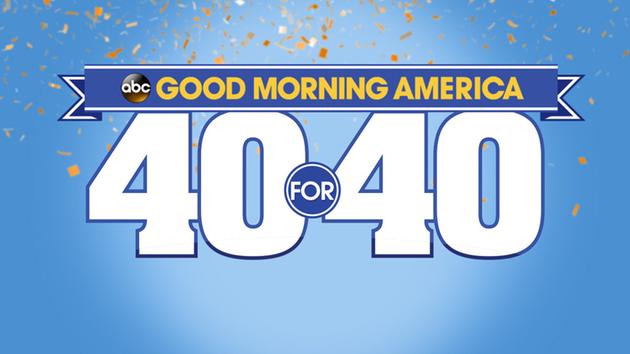 ABC News’ “Good Morning America” has embarked on a marathon 40-hour broadcast in honor of its 40th birthday.

In addition to providing rolling news coverage, the 40 hours of programming also includes celebrity guests, past hosts of the show and performances. Although the normal blocks of “Good Morning America” are interwoven into the 40 hour broadcast, much of it is only available online or on app-enabled boxes.

For the production, the network created a mostly flat-style logo that featuring to large “40”s with the word “for” placed inside a double-ringed circle between the two numbers. The show’s logo is then placed atop that, with “Celebrating 40 years of GMA” included in a ribbon in some iterations. Confetti also appears, in varying amounts, in front of the logo.

“40 for 40” uses the “Good Morning America” graphics package, which debuted earlier this month as part of a set and graphics update. The “40 for 40” logo was placed in the lower left corner where topical images typically appear. During some of the broadcast, the show used the lower left corner to include a countdown to an upcoming performance or feature.

The broadcast originated from the normal “GMA” studio in Times Square.