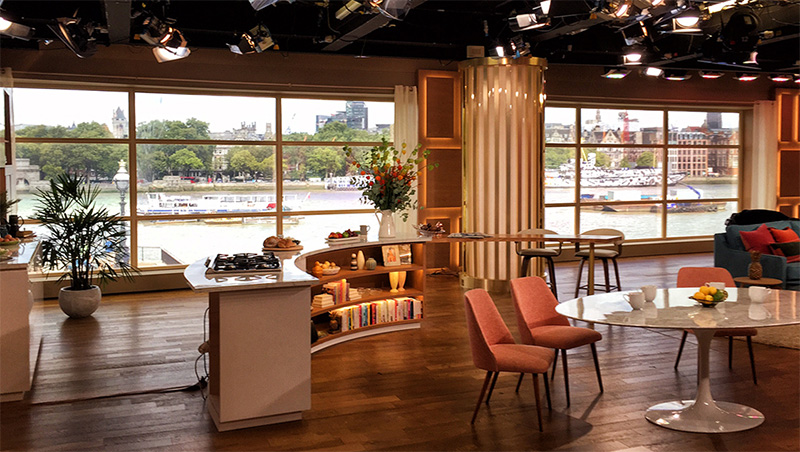 Many broadcasters avoid real windows for studios because of natural light, which can change throughout the course of a broadcast day and present the constant need for adjustment.

With solutions like Rosco’s RoscoView, which has been widely used by broadcasters around the world for nearly a decade, controlling light becomes as simple as rotating a filter on camera.

We recently had a chance to speak with a Stephen Spendiff, a product manager at Rosco, about the system after its recent use by CBC at the 2016 Summer Olympics.

Broadcasters have always feared natural light. How does RoscoView help “tame the sun” for broadcasters?

RoscoVIEW essentially acts as a variable neutral density inside the windows of a broadcast studio. This allows broadcasters to attenuate the exposure of their windows to the lighting conditions that exist – in real time. With a simple rotation of the RoscoVIEW Camera Filter, the windows can be darkened or lightened to match the lighting conditions outside. RoscoVIEW also allows the camera to view the outside as if it has less light. This helps the studio balance their lighting as their interior light could never have enough lumens to compete with the sun.

What are the practical applications of the product and how has it been implemented?

Talk a bit about how it works? What is necessary to make it work?

It’s worth noting that RoscoVIEW does not prevent sunlight from streaming in through the windows. Cross polarization does not affect the sunbeam or its shadows, so traditional flag masking may still be required to block the sun’s rays.

What kind of investment is required for the system?

Pricing on RoscoVIEW varies based on the needs of the installation. RoscoVIEW installations can run anywhere between $5,000 and $250,000.

Simple installations, such as single panels for mobile studios, are not as expensive as large studios with several large windows, multiple cameras and the need for remote control of the system. Contact your nearest Rosco office to discuss RoscoVIEW pricing for your studio.

How long is installation time?

Like pricing, RoscoVIEW installations will vary greatly depending on the project. Single panel installations can happen in a matter of hours, while multi-panel projects might necessitate weeks. Anyone considering RoscoVIEW for their studio should visit the website: www.rosco.com/roscoview. Contact your nearest Rosco office to request product demo kits and a RoscoVIEW consultation for your studio.

How does it compare to traditional shades or other methods?

Other methods for window control include:

In each case, RoscoVIEW offers studios maximum versatility and speed when it comes to changing their exterior light. Studios would need to wait for a break in the broadcast in order to allot enough time to swap out the gels or lower in the proper shade, which could mean a significant amount of airtime with “blown-out” or overly dark windows. RoscoVIEW not only saves labor time because a crew isn’t needed to change the exposure of the window – it also preserves the aesthetic of the set.