How eliminating the electoral college could affect TV news 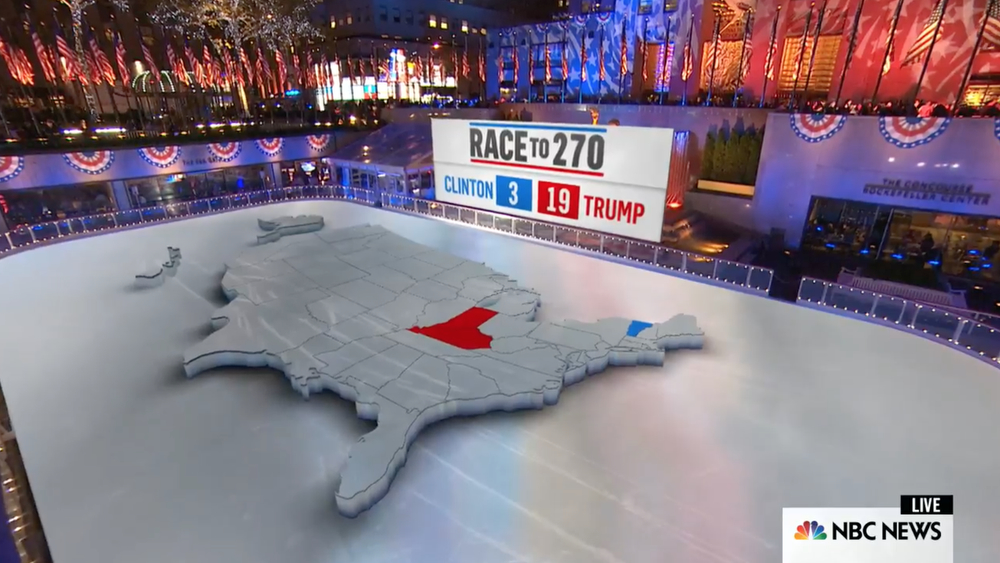 Donald Trump’s defeat of Hillary Clinton in the electoral college has once again sparked calls for a shift to counting popular vote instead — a change that could have some interesting implications for TV news and how it covers elections.

We won’t debate the pros or cons of keeping or abolishing the electoral college — that’s being discussed all over the Internet, but we do want to take a look at how the shift away from an electoral map could change the TV news coverage of elections. One of the strongest visuals that television news uses for election coverage has long been the electoral map.

At its core, the electoral map is just the outline of the 50 states. As the night goes on and races are called for one candidate or another, the states are changed to the color representing the winning candidate. Right now, those colors and red for Republican and blue for Democrats, while gray represents undetermined states.

As the night goes on and races are called for one candidate or another, the states are changed to the color representing the winning candidate. Right now, those colors and red for Republican and blue for Democrats, while gray represents undetermined states. The state governments in Maine and Nebraska have already thrown a small wrench into this clear and straightforward visual approach.

These two states are unique in that they use hybrid electoral vote system where electoral college points are awarded on both a statewide and congressional district basis, which most news outlets represented with diagonal alternating colored lines depecting the predicted mix of votes. Even without the electoral college, the electoral map as we know it today could remain a valuable visual for reporting election results — especially on a broader, high level view of how the race is unfolding.

However, care would need to be taken for the map to not become a misleading visual since it doesn’t, in its current form, have a good way to account for actual vote counts.

With the further rise of interactive touchscreens, the ability to zero in on specific counties and congressional districts has become more and more common and a valuable way to determine how the state as a whole will swing. Most often, these maps use realtime data-driven graphics of actual vote counts to turn counties or regions red or blue — as well as varying shades of red and blue, depending on how far either way the race is swinging in that area.

These types of maps could play a bigger role in election night storytelling if the electoral college is eliminated since actual vote counts would presumably become more vital. Again, the overall color (or shade thereof) of a particular county would also be a powerful visual. One challenge of county-level map, however, is that, as most are designed now, there’s no visual distinction between counties with larger populations than others.

This could be a key challenge in many states because larger metropolitan areas that may only account for two or three counties actually hold the vast majority of the votes.

The elimination of the electoral college could also change the length of election coverage, too, especially in close races.

And, given the actual vote counts over the past few election cycles, the trend of closer races (at least in popular vote) could be the new reality in American politics.

A particularly close race could mean that it could take days — if not a week or more — for a winner to be called, so the whole idea of “election night coverage” could morph into “election week coverage.”

Should the counting period stretch out longer, this would, on one hand, give media outlets even more opportunities for coverage and the ad revenue that comes with it, but the tolerance of viewers could be stretched thin the more coverage drags on. How might visual storytelling look if the electoral college is eliminated?

For one, a close race would require more attention be paid to actual numbers — rather than a simple running race to 270. So how could TV news present that visually?

These are just a few ideas of how TV news could present information should the Electoral College be eliminated.

What are your ideas and thoughts on how TV might adapt should the country shift to popular vote?