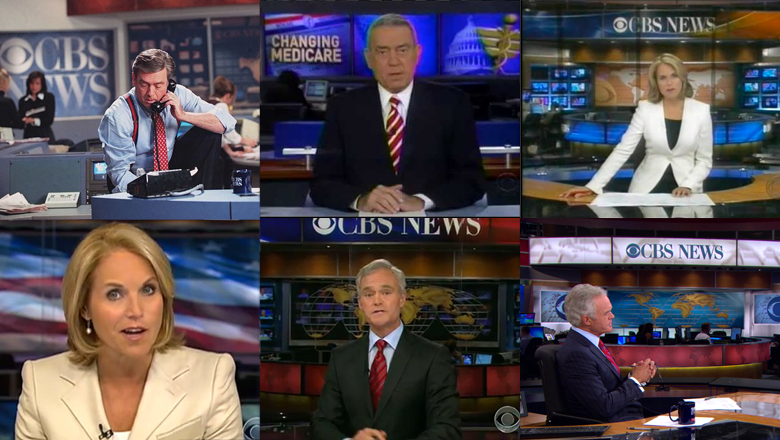 After temporarily relocating to Studio 57 for its election coverage, “CBS Evening News” is now calling the space its permanent home — marking the conclusion of using nearby Studio 47 for years.

The show’s previous home dates back to when Dan Rather was anchor and has maintained its basic layout even as two other anchors passed through the chair. When the previous set debuted in the mid-1990s, the anchor desk was situated in front a small working newsroom space built within the CBS Broadcast Center on West 57th Street in New York City, in a complex of buildings that were once a dairy depot.

In the far background was a world map with faux monitor walls and flanked by two large “CBS News” logo banners.

Above this a rich, reddish wood header element with downlighting framed the anchor desk shots. Above this was the CBS News logo.

Closer to the anchor desk were two blue world map panels on either side, along with an additional wall featuring the reddish wood background.

Behind the anchor desk, a low wall with railing snaked its way down the middle of the studio, with a separate credenza on the far right of the set in front of the wood panels, which was frequently used for anchor debriefs.

Interestingly, when viewed from above, the anchor area layout roughly resembled the CBS eye logo, with the anchor chair being the “iris” of that eye, the anchor desk itself the bottom curve and the railing and credenza forming the tap arc — albeit a broken one. While Rather was still anchor, the set was updated to include three large rear projection screens in place of the world map background.

These screens were used for both generic backgrounds as well as topical graphics such as the Medicare themed one shown here.

The set remained essentially the same after Rather was ousted from the anchor chair and during interim anchor Bob Schieffer’s tenure. When former “Today” anchor Katie Couric took over in 2006, the network redid the set in warmer tones, though the basic layout and footprint remained remarkably similar.

The main background was replaced with a coral and white toned world map, while two monitor walls on either side featured a backlighting effect.

A lighter wood tone was used in the header element above the anchor one shot, while the “CBS News” logo maintained is prominent position atop the set, though this version used a blue and orange design borrowed from the broadcast’s graphics package.

A small interview area with panels featuring historic versions of the CBS eye logo was also included in this design.

The studio space was separated from the workspace beyond with pivoting glass panels with overlaps that added a bit of dimension and depth to the look.

The new design removed the world maps in favor of, on the left side, a duratrans background with flatscreen, and on the right, a large curved rear projection screen. During Couric’s tenure, the network swapped out the peach-toned world map for a brighter blue version (along with other minor tweaks) when the show switched to HD in 2008. After this, the network changed out the background for an American flag themed design to coincide with the 2008 elections that remained in place — somewhat inexplicably — until Couric left in May 2011. The flag look was accompanied by other on-set graphics updates. When Scott Pelley took over in 2011, the network changed the background again — this time using a simulated version of the gold world map found on the broadcast’s Walter Cronkite era set. Through the map’s latitude and longitude lines, the backdrop featured a blurred monitor wall design. Most recently, updates to the set included updating some of the sets finishes with a brighter, white-gray look and a pale blue background behind the Cronkite map design.

The two side monitor walls were also swapped out with large, single panel screens, while the header was later updated with a lighter printed graphic featuring the extruded map design found in the newscast’s graphics package.

Now that the broadcast has moved to Studio 57, which is the longtime home of “CBS This Morning,” it gains the use of the studio space’s large video walls for more creative standup shots, while the lighter exposed faux brick walls with CBS memorabilia is a nod to the newscast’s origins.

It’s worth noting that over at ABC News, “World News Tonight” shares a studio space with the overnight “World News Now” and “America This Morning,” though the latter two newscasts use a side set wall for their primary backgrounds.

CBS News, is unique, however, in its use of the same studio space for both its signature evening and morning shows.

It also remains to be seen what will happen to Studio 57 — is the set destined for the great studio in the sky or will it be repurposed for another use?