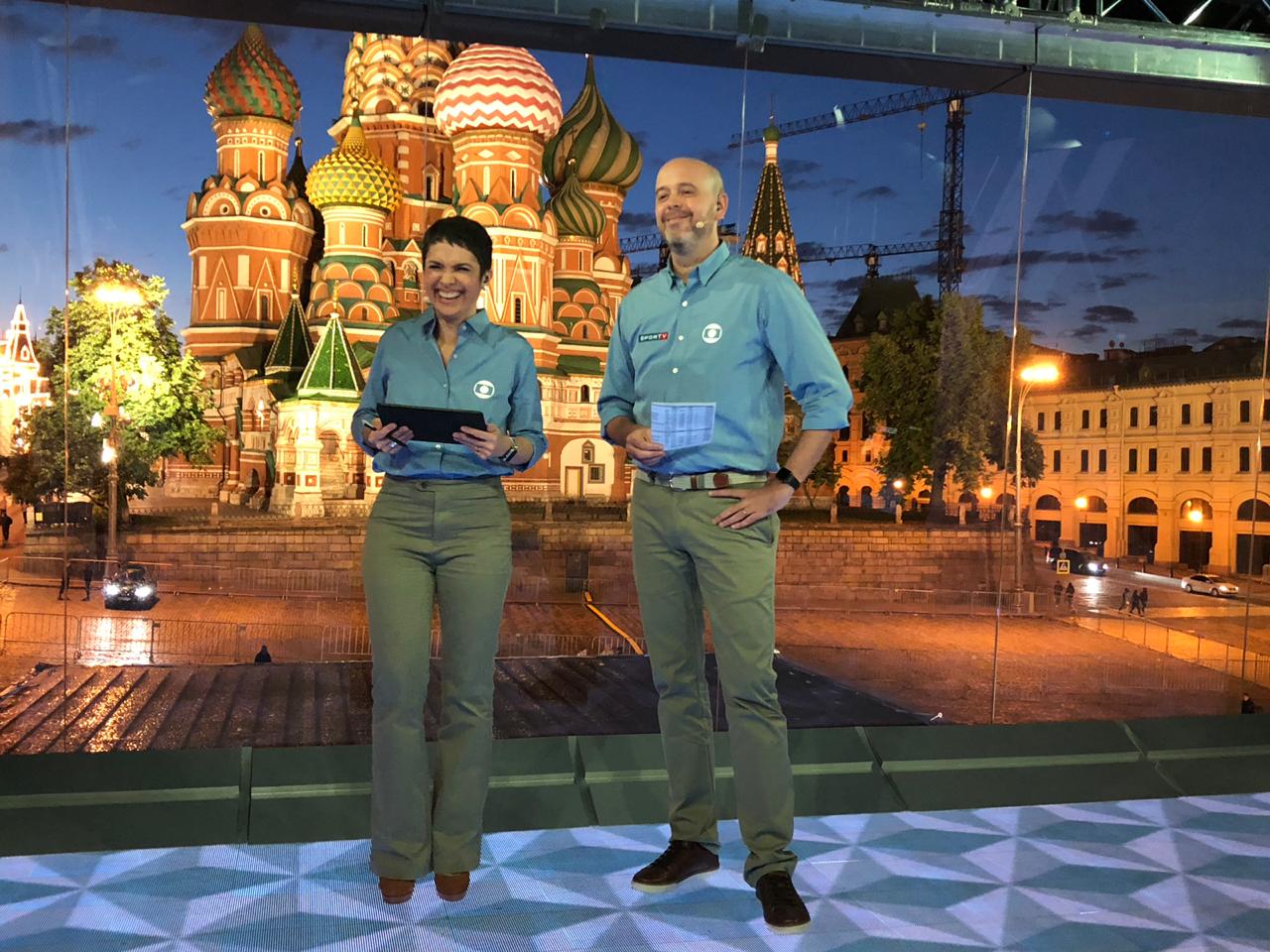 Gearhouse Broadcast worked with Globo on the integration, providing the needed rental equipment and installation.

Globo’s full production studio is being operated at the center of the action, at Red Square, in Moscow, Russia, for the network’s broadcast of the World Cup event. Originally tried-and-tested, first at Globo’s Rio de Janeiro premises, and later at Gearhouse’s premises in the UK, to ensure a faultless live performance in Moscow, the studio brings Globo’s World Cup coverage to life through creative augmented reality visuals.

“The studio is an original design developed by Globo’s Arts & Technology Divisions, and represents a major step forward in comparison to what we have used at the Rio 2016 Olympic Games,” said José Manuel Mariño, Globo’s Director of Technology for Sports. “There are no physical scenic elements in the studio. We have just three giant LED screens, six cameras, and nothing more. We air four network news shows per day, and two weekly network programs from this studio. The cameras are switched in Rio, as we are using remote production, so the studio is both innovative and efficient.”

“We worked closely with Globo at every step on the road to Moscow to help make Globo’s creative vision a reality,” said Ed Tischler, Managing Director at Gearhouse Broadcast UK. “Augmented reality is a powerful tool to get complex analysis across to mainstream audiences in an aesthetically pleasing and creative way. Avid’s impressive, leading-edge technology is the go-to for this type of broadcast application and will increasingly figure prominently in high-profile sporting events like the World Cup. It has been a welcome opportunity to see the Maestro solutions at work.”

Through a suite of augmented reality tools, Avid’s Maestro | AR provides the ability to create captivating 3D virtual objects that look like part of the actual environment. The solution allows the insertion and control of 3D virtual objects and graphics, as well as sophisticated real time multiple image manipulation. Avid’s Maestro | Designer is a powerful design tool used by graphics artists and designers to create the compelling graphics seen in the broadcast. Maestro l Designer can import stills, video, and graphics from other third-party programs while giving artists the flexibility to create and design compelling 2D and 3D content. Avid Professional Services provided valuable training and support for the project.

“Globo needed a powerful augmented reality solution to bring to life the world’s most prestigious football tournament for the millions of passionate fans in Brazil—the most successful country in the tournament’s history,” said Tom Cordiner, Senior Vice President, Global Sales at Avid. “We worked closely with Gearhouse to deliver an Avid Maestro solution that enables Globo to keep up with the fast-paced action on the pitch and create eye-catching graphics that boost ratings and engage viewers in exciting new ways.”