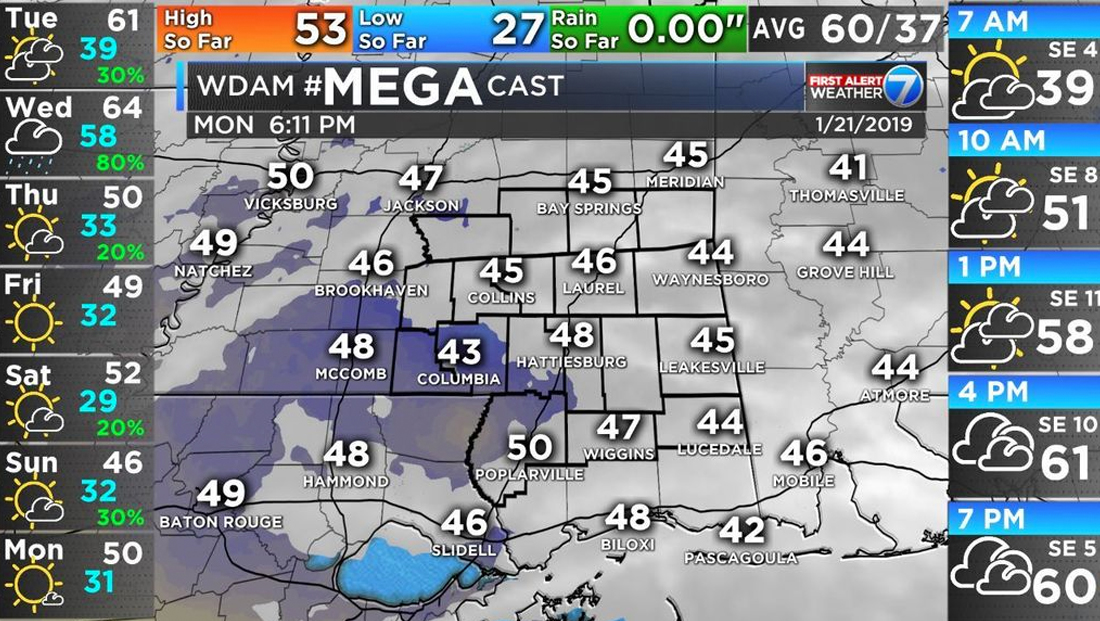 A Twitter account run by Mississippi television station WDAM tweeted a weather “Megacast” that uses almost every available pixel to pack in a lot of weather information.

The image, labeled as the “WDAM Mega Cast” (with “mega” in bigger letters), came from the Twitter account “@WDAMMaxThree.”

“Generally, the Max Three account … is an AI account we made that tweets out weather graphics along with a ‘fun’ blurb. We try to get in there every so often and give it new phrases to tweet with graphics,” WDAM Chief Meteorologist Nick Lilja told NewscastStudio via email.

In addition to the temperature and weather map in the middle of the screen, the “wings” of the graphic are used to present a seven day forecast on the left side and predications for five key hours in the day on the right.

Along the top, is the high and low temperature as well as average for the day.

“The Megacast was an idea I had one day to put as much weather information on one graphic as allowed by our weather software. That way when someone asked, ‘What’s the weather?’ We wouldn’t have to guess what weather they wanted. Did they want today’s forecast, current conditions, tomorrow’s forecast, the next seven days? Doesn’t matter! That one graphic answers it all,” said Lilja.

Lilja says the “megacast” has been used on air perhaps twice.

“The graphic is mainly used for social media because using that on-air would likely give everyone a headache from information overload,” Lilja explained.

The account’s bio reads “I am the other WSI TruVu Max computer at WDAM. I rarely get air time but I am on the app a lot!” and links to the station’s weather page.

Most television stations have multiple computers that run the weather software that generate maps and other graphics. Some are meant as backups, while others, as this account’s Twitter bio appears to indicate, are used for rendering imagery for alternative purposes such as in a station’s mobile app or website.

In other words, this computer typically isn’t the one feeding the graphics behind the weather forecasters (though it might be if other computers go down).

@WDAMMaxThree regularly tweets screen captures (154,000 and counting) of the station’s weather graphics along with a brief label and, sometimes, commentary, and is presumably meant to provide extra weather images to those who are interested — though the account only has 121 followers as of this writing.