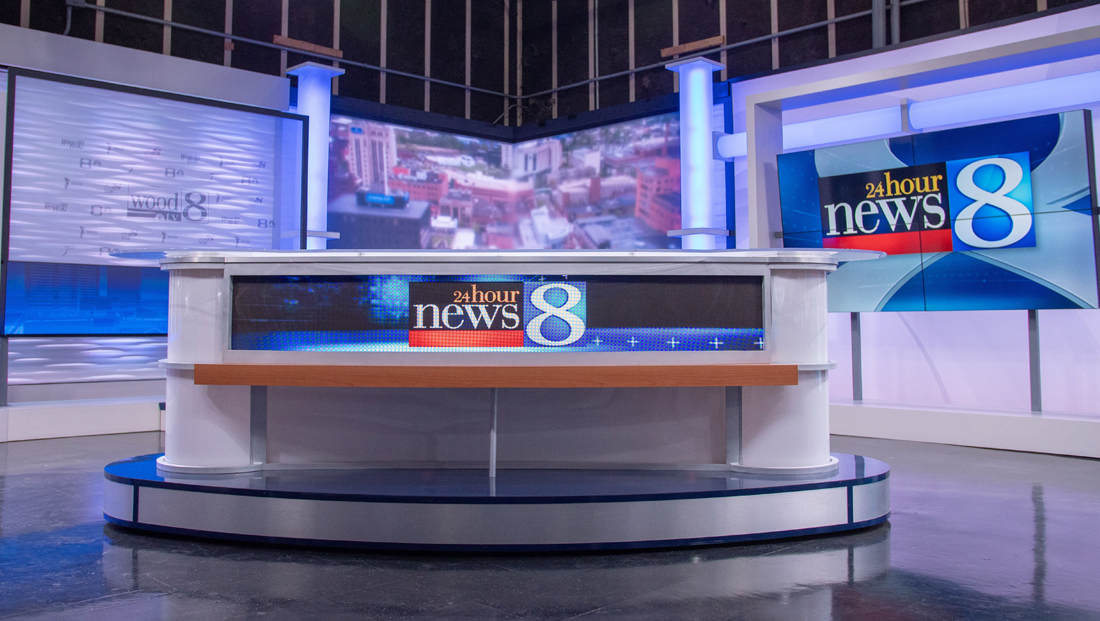 Nexstar’s WOOD TV8 in Grand Rapids, Michigan, took the wraps off a new set this week.

The new set is inspired by the look other Nexstar stations have rolled out but has its own unique features added by the local design team at the station.

In one corner of the set is the primary anchor background, which features two intersecting video walls at a 90-degree angle, created from 176 individual seamless LED panels.

WOOD can wheel its anchor desk in front of the corner to create a traditional anchor setup, but a riser tucked in the corner below the video walls and ribbon also allows the area to double as a multipurpose or interview area.

The station has already used the sofa setup for its morning newscasts.

Framing this area are a pair of sleek internally lit columns. 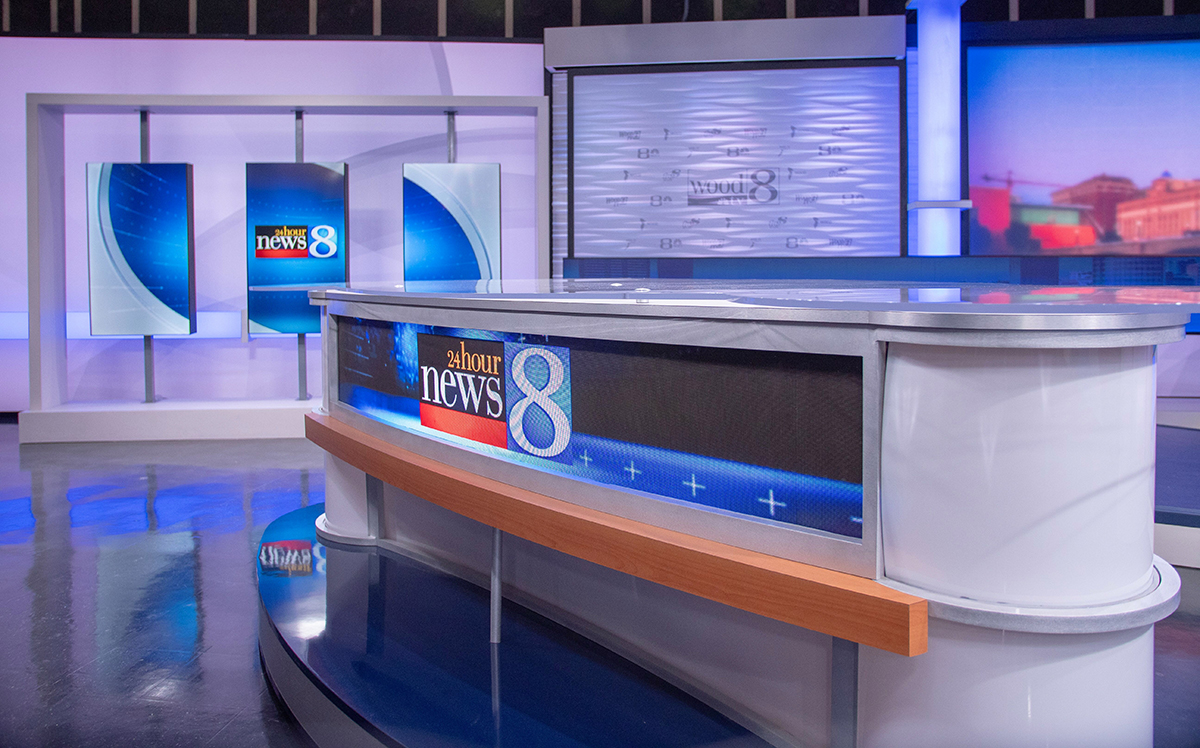 On either side of the corner video wall, meanwhile, is an asymmetrical look with a 2×2 video array in a gray frame camera right and frosted glass panel in front of a wavy textural wall on the other.

This wall showcases both the current WOOD logo — as well as a collage of smaller designs from the station’s past.

To the left of this is another gray frame structure with a triptych of vertically mounted panels that can be used for standups or other configurations.

Some elements from the old set were kept — including the station’s familiar 4×6 video wall that now sits camera right of the main anchor area and is capped off by a sculptural wall with dramatic curved elements.

Combined with the new video panels, the studio is flexible enough to be used for not only the station’s newscasts, but also the station’s “eightWest,” “Maranda Where You Live,” “Sports Overtime,” “To The Point” and community partner productions.

The station’s old anchor desk was also kept — but updated with a seamless LED front instead of the four side-by-side panels installed there previously. 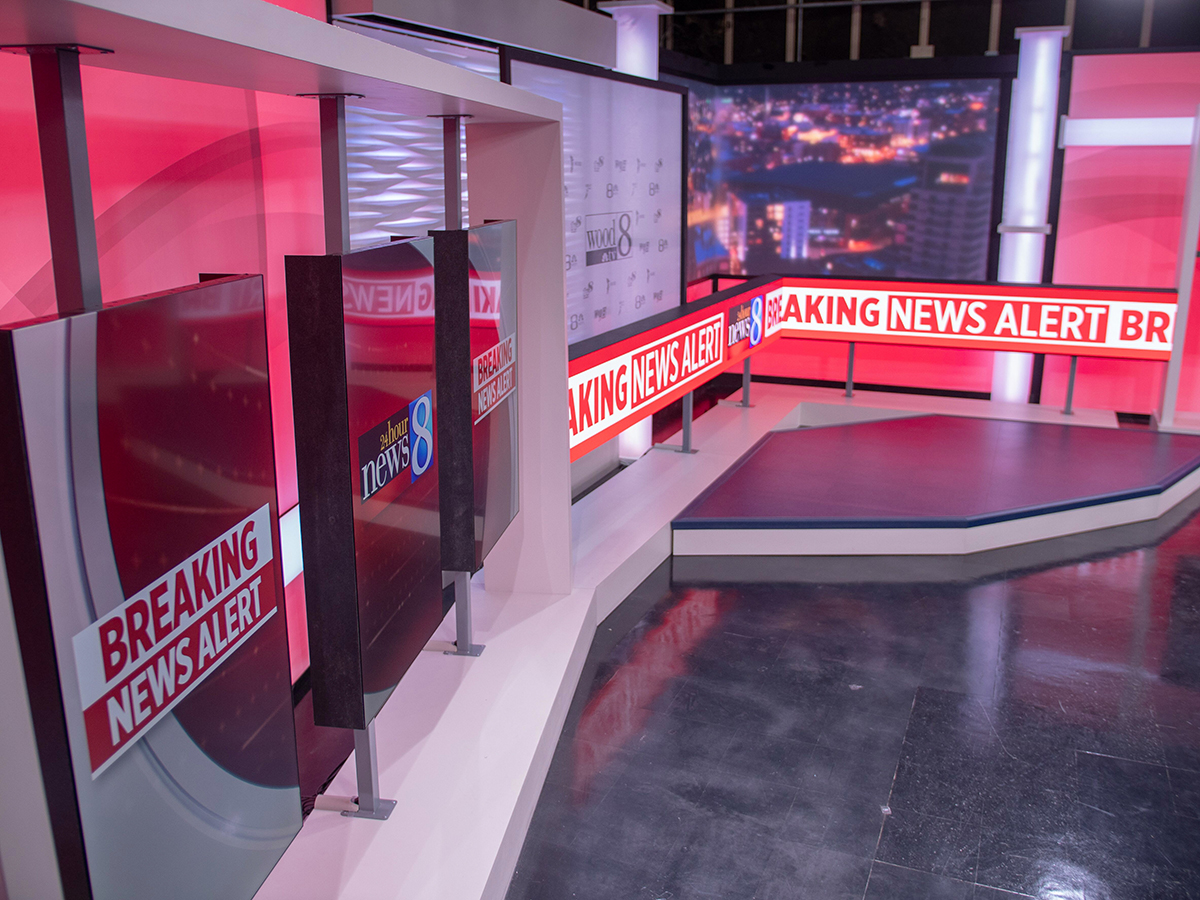 Like its sister stations, many of the studio’s backlit elements are color changing — with blue used as the “default” setting, red for breaking news and gold for mornings.

In addition to the more visible changes, the studio was also converted to LED lighting units, which draw less power and emit less heat, making the space more energy efficient.