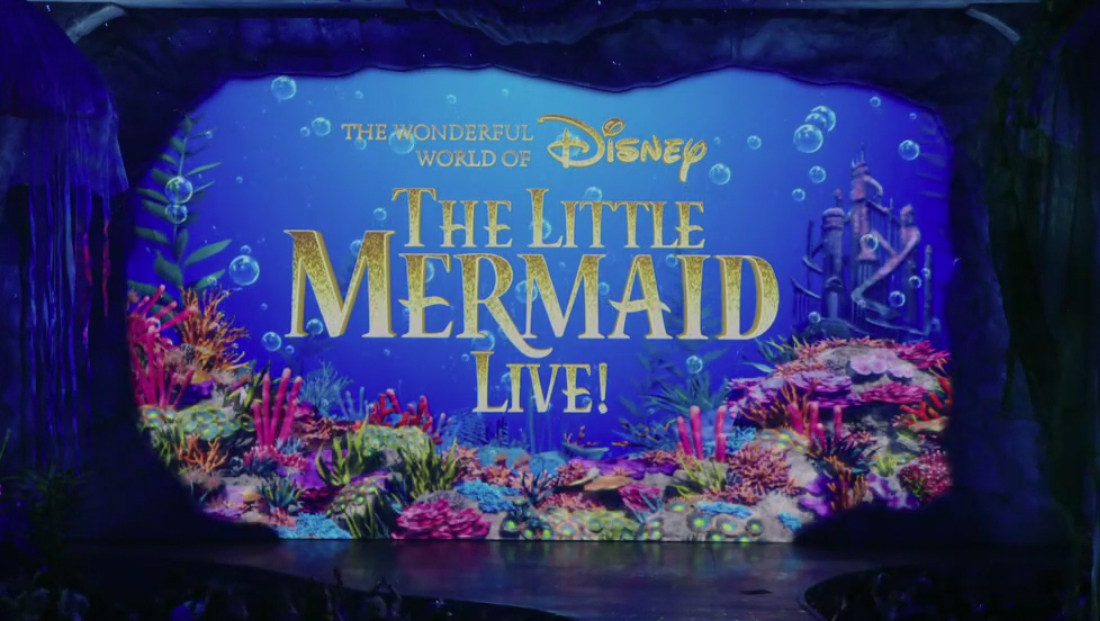 Despite being widely panned by critics, ABC’s “The Wonderful World of Disney: The Little Mermaid Live!” did attempt to take on an interesting challenge from a production design standpoint — combining extended sequences of the original animated film with live action.

Of course, one could argue that one of the biggest challenges with doing a live version of a musical that, almost by definition, takes place under water (at least for a good chunk) is a bit tricky — but tell that to the broadway versions of both “Mermaid” and the “SpongeBob Square Pants” musical.

Ultimately Disney decided to build a “dive in” theater (get it?) at its studios in California that featured a large stage with proscenium arch styled with the organic curves of faux underwater stones and a twisting “runway” that thrust into the studio audience.

The stage itself used both solid and scrim materials that were used as projection surfaces and also was backed with a nearly seamless LED video wall. 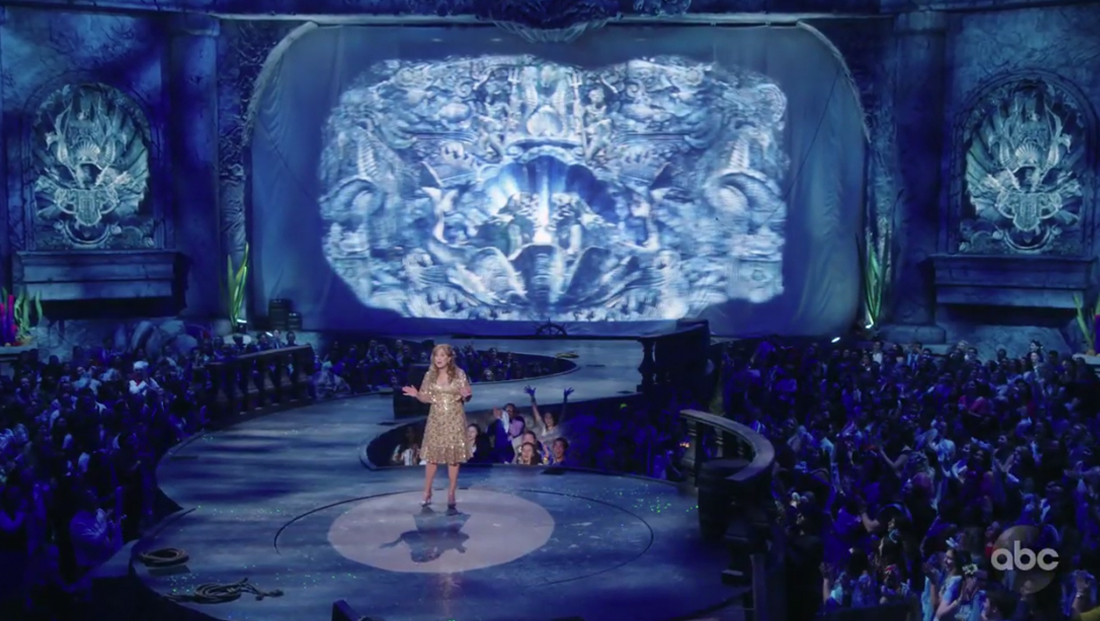 LED was was also installed on either side of the stage opening where, by default, it depicted a stone carving motif, but could also change for each scene. 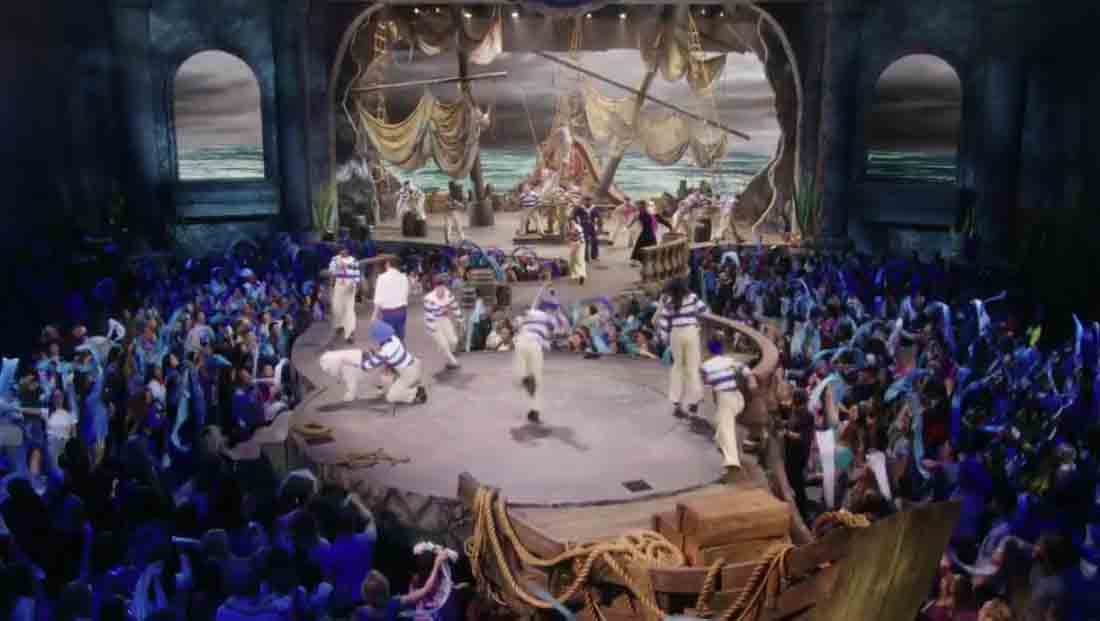 The stage itself, as well as the curved walkway and circular platform with a revolve, were used to present the live action sequences — often in combination with projection on the fabric and LED behind (or a combination thereof). Disney acknowledge that some of the scenery used here was inspired by the stage musical version of “Mermaid.”

Projected versions of the “Mermaid Live!” as well as select scenes from the movie were also fed to the screen and shot, “video on video” style, by one of the cameras scattered around the theater. 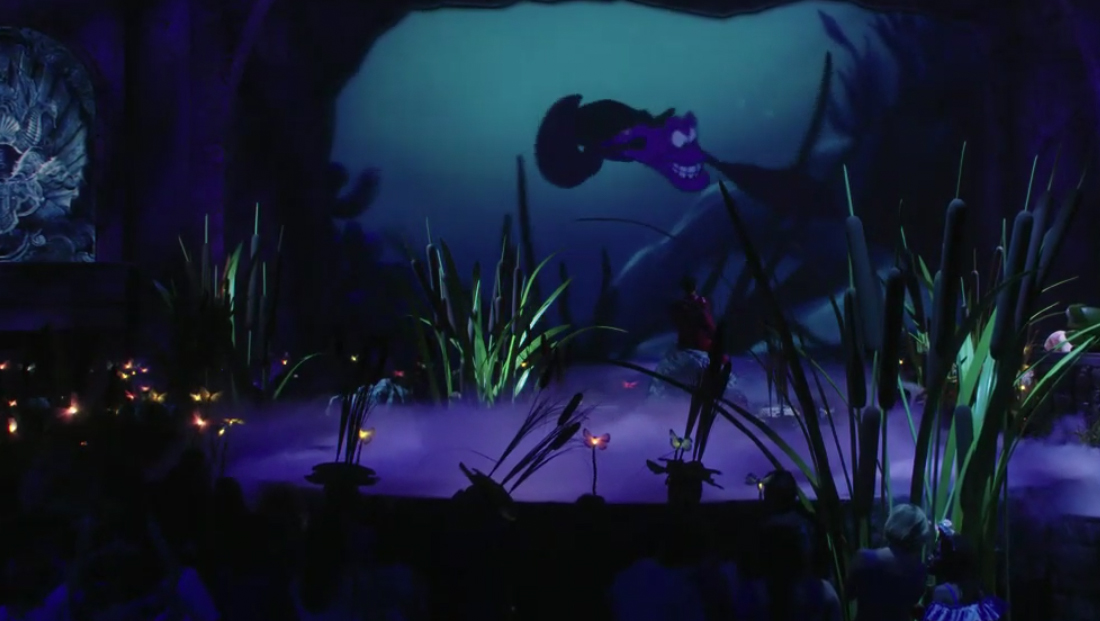 Audience participation — at least to some degree — was also used to enhance the action on stage with, at various points, audience members waving blue streamers to simulate ocean waves or swaying with light up butterflies and faux cattails during a romantic scene. 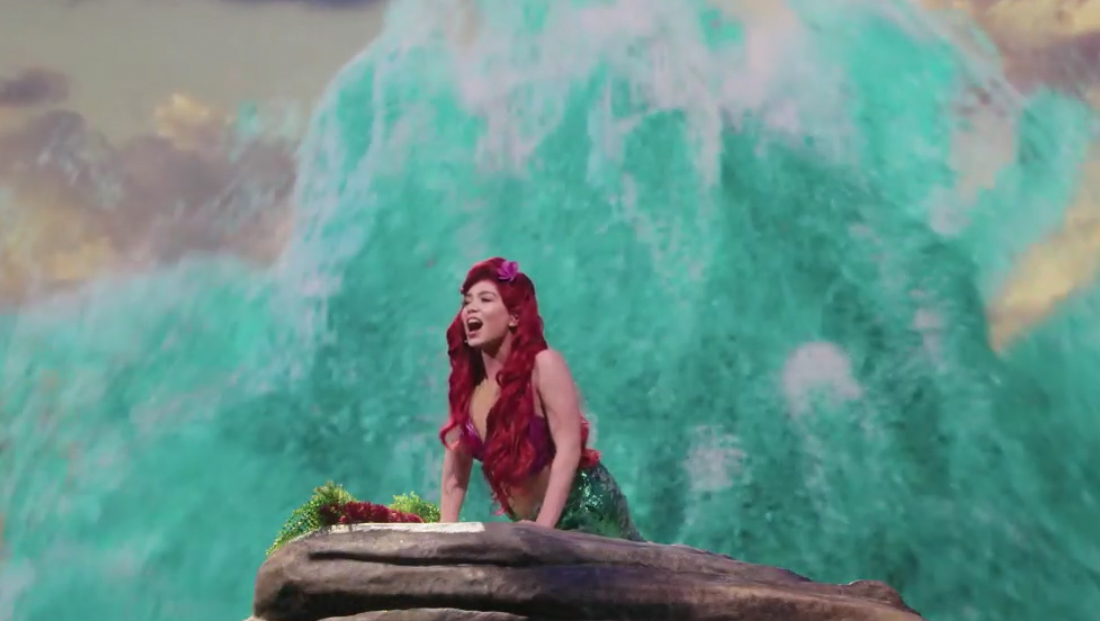 The production recreated the iconic scene of Ariel perched on a stone outcropping with dramatic wave behind her thanks to a combination of a faux stone scenic element and video of a wave behind her.

The production also made use of aerial harnesses to create various swimming scenes, including one where Ariel soared over the audience. 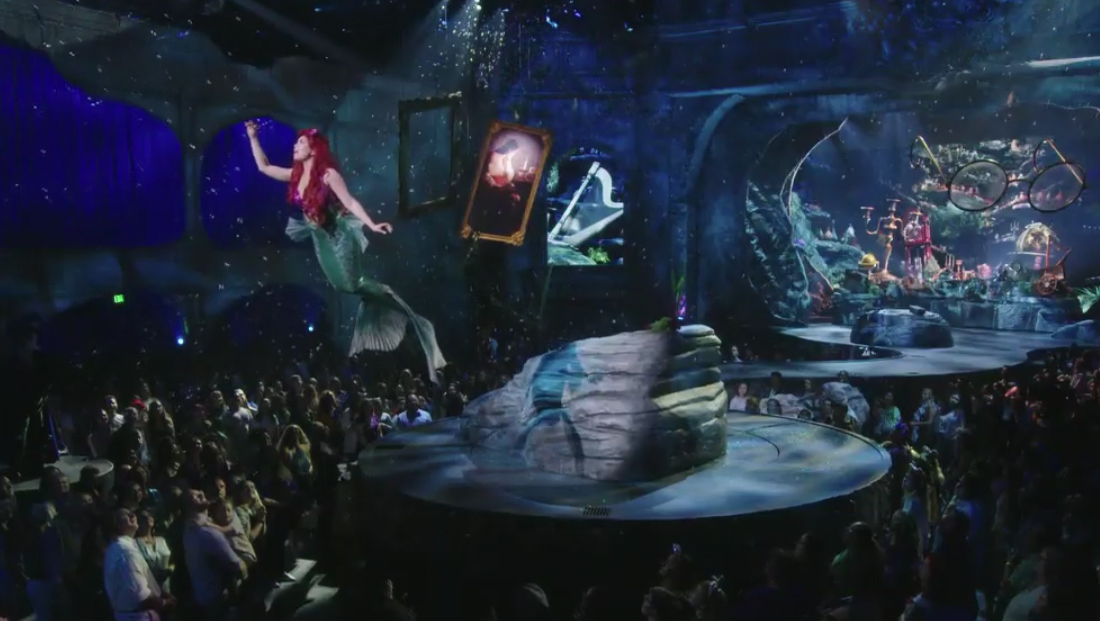 In the scene where Ariel signs the contract with the sea witch Ursula that trades becoming human for her voice, designers blended multiple layers to that included Ariel behind scrim that showed an oversized version of the contract, inspired by the original film’s drawings and Ursula in front. 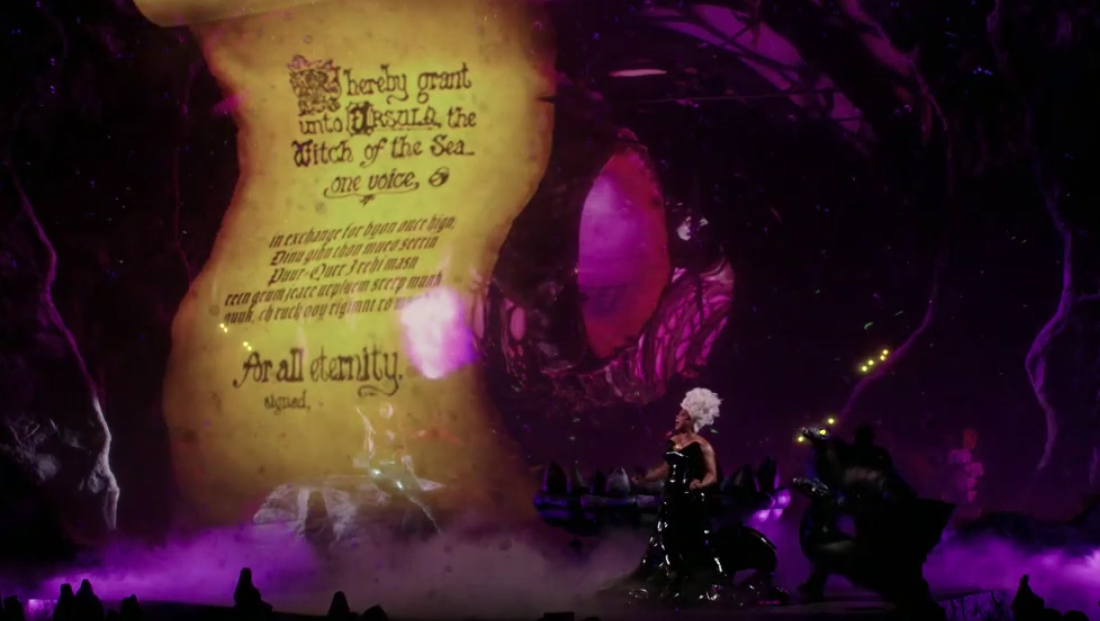 ABC parent Disney also used the presentation as a way to promote its upcoming Nov. 12, 2019 launch of its Disney+ streaming service, including running a one minute promo for the launch shortly into the production.

The promo was preceded by a “Hold on to your fins … ‘The Little Mermaid Live!’ will be back in 60 seconds” interstitial and then featured a countdown in the upper left.

Disney also promoted the live action version of “The Lady and the Tramp” — a Disney+ exclusive — as well as “Frozen II” and its upcoming ABC holiday special at various times throughout the show.

Perhaps sensing that viewers would grow tired of seeing the animated sequences from the original film, ABC inserted snipe-style text teases throughout the show that promoted upcoming stars and musical numbers. 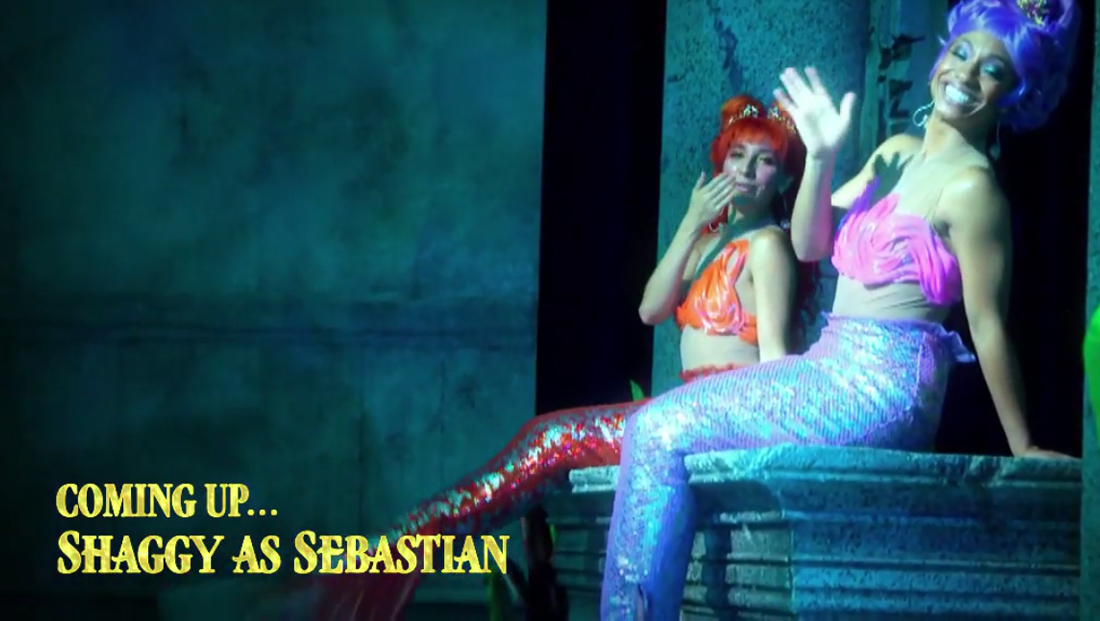 The graphics appeared both as transitions to commercial breaks as well as in the middle of scenes. 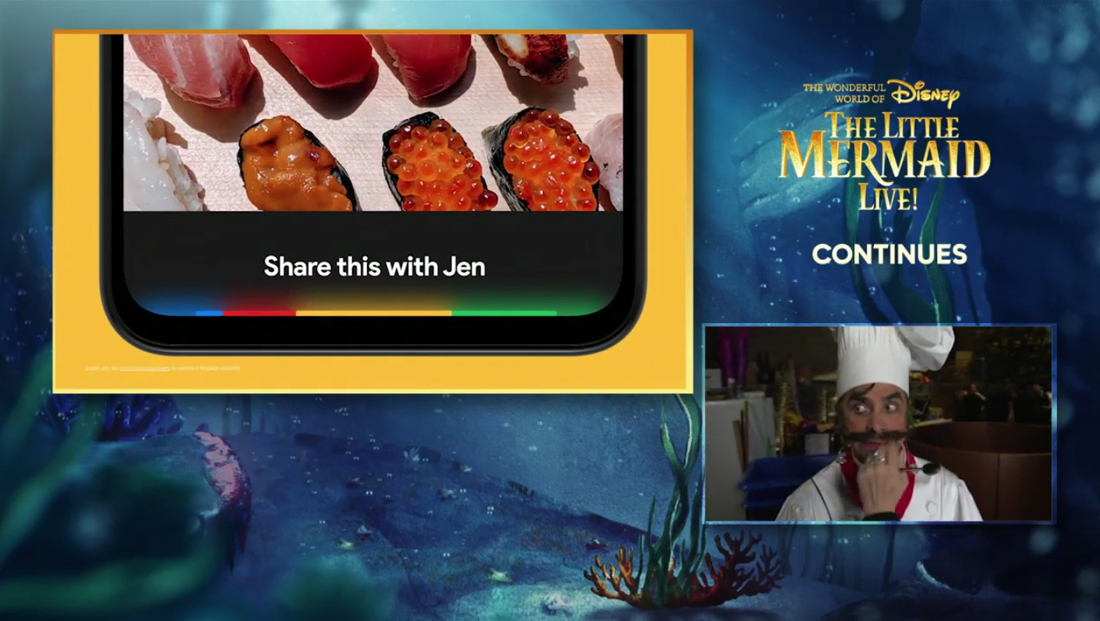 One commercial break featured a “two box” with ads showing in the upper left and a small, behind the scenes feed in the lower right, all backed with a “Mermaid” themed graphic.