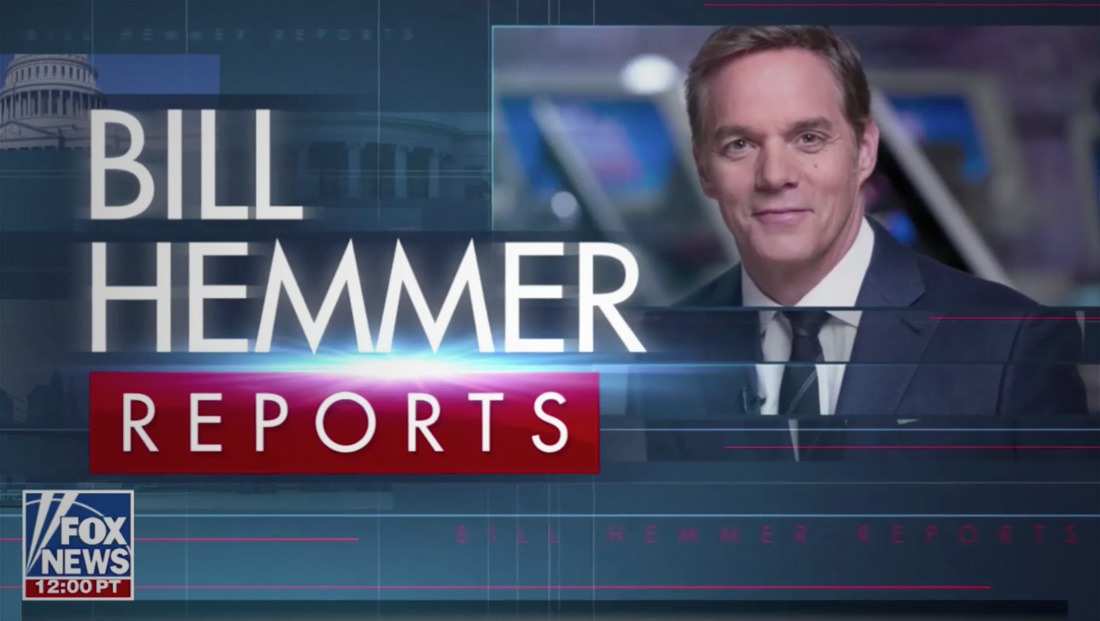 In a surprise move, Smith announced his departure from the network in October 2019. Since then a rotating slate of hosts have been filling in.

Fox announced that Hemmer, who had been hosting “America’s Newsroom” with Sandra Smith (no relation to Shepard) would move to the timeslot.

In addition to the obvious need for a name change (one that lost “-ing” for some reason), the show got new graphics using a grid of dark blues accented with lighter shades and red bars and imagery of Hemmer.

Smith’s open used text and glass cubes — but no imagery of him.

Whereas Smith’s program often created the illusion of “windows” overlooking New York City using some of the video’s plentiful video walls, Hemmer uses more topical graphics in the blue color scheme and, when city views are used, they are colorized and don’t appear to be live feeds.

The show also got a simple logo using the same typeface the network uses across all of its shows’ lower thirds, with the “sliver” getting a matching Hemmer look.

As of its first edition, “Hemmer” also did not use the “Fox News Alert” branding that the network typically heavily uses throughout its programming.

During Smith’s days, “Breaking News” stingers were typically used in place of “Alerts” — perhaps a nod to Smith’s role as breaking news anchor for the network (a title Hemmer also inherited).

Hemmer’s show continued to use sweeping jib and handheld shots combining multiple video walls and set areas while he and other talent walked around the studio, along with interviews that were conducted at the desk in the center of the studio.