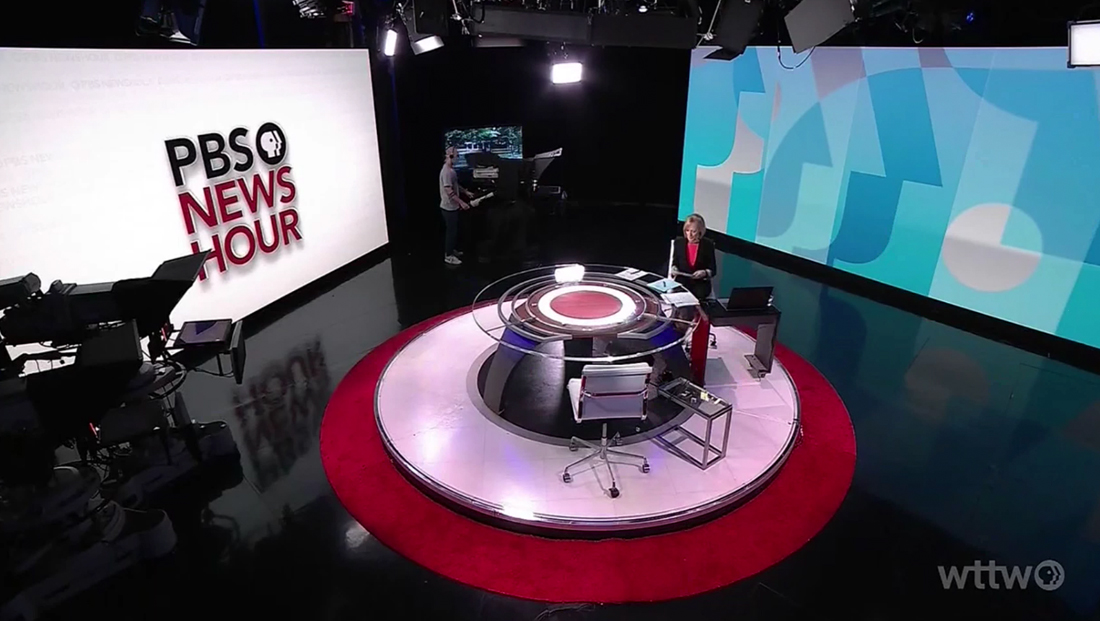 In addition to “NBC Nightly News” moving to a temporary studio for Democratic National Convention coverage, “PBS NewsHour” also made a studio shift for its coverage starting Aug 17, 2020.

The show, which broadcasts from WETA’s studios in Washington, D.C. on weekdays, moved into the space normally used by “Washington Week,” using what appears to be the anchor desk and roundtable and video wall array that debuted in 2018.

“NewsHour” also brought in two additional seamless video walls, one of which was used as a primary anchor background.

The other, set up roughly opposite the first, was used as a way for anchor Judy Woodruff and in studio guests to “face” analysts and correspondents joining remotely.

The show also used limited in studio guests, sitting at the same desk as Woodruff but spaced out farther that “Washington Week” normally would.

Behind the guests was a low profile video wall that appears to have been borrowed from the modular “Washington Week” set, which is designed to be disassembled easily when the weekly show is not in production.

The space was also used for the “PBS NewsHour” special coverage of the convention.

“PBS NewsHour” and many of its special coverage normally originates from another space in WETA that features a unique set created mostly from freestanding elements.

Whereas that set features white cyc, the convention home kept areas between the video walls, which were leveraged as camera positions, in darkness. The video walls were used, however, to recreate some of the transparent installations on the normal set and could be switched out with different graphics during convention coverage.

“PBS NewsHour” includes the “NewsHour” branding in almost all of its special coverage titles, even when those specials are produced outside the normal “hour” the show occupies.