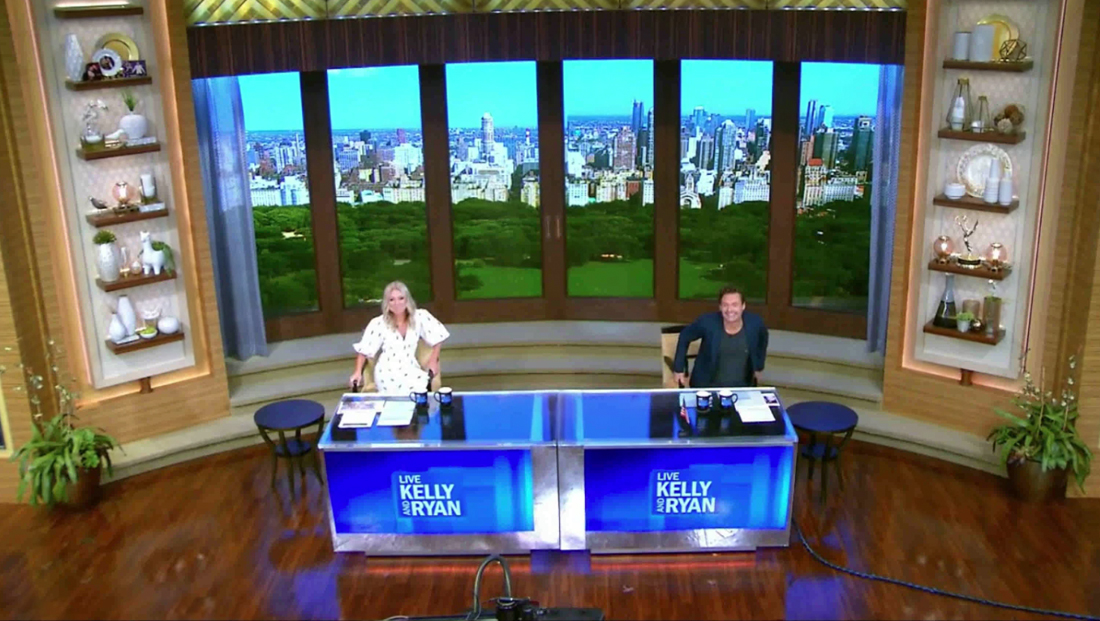 ABC produced syndicated talk show “Live with Kelly & Ryan” returned from summer break with a clever — though slightly clunky — way of bringing the hosts “closer” together in two shots.

Starting on Sept. 8, 2020, the show returned to producing shows from its New York City studio with both Kelly Ripa and Ryan Seacrest (Ripa had been reportedly hosting mostly from a home in the Caribbean with Seacrest joining from his Los Angeles area home) before the show went into a summer hiatus.

When the show started, viewers were treated to a locked down overhead view of the set showing the pair entering and sitting down on either end of a very wide counter like desk with video panels on front.

The show then cut to what appears to be a single two shot — but sharp eyed viewers noticed they were suddenly sitting much closer together than showed in the previous view.

It was all thanks to the magic of TV — ABC appeared to have two locked down cameras, one pointed directly at each host, that the control room then put side by side and added a slight blur between the two in an attempt to “hide” the “seam.” 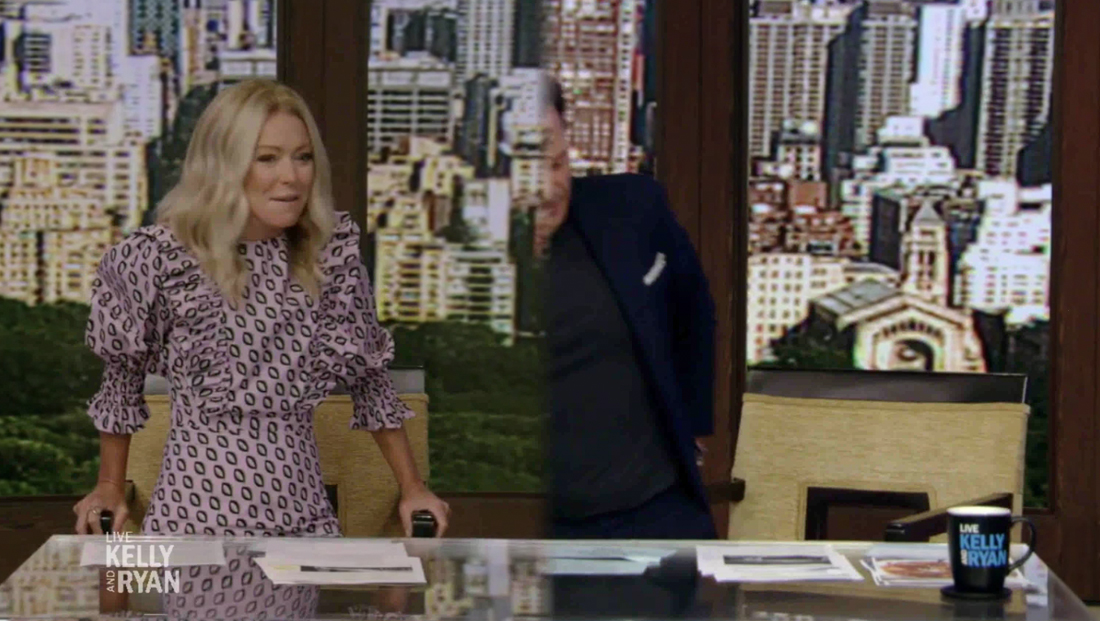 The effect was ruined almost immediately when Seacrest walked toward the center of the desk to hop into his chair, cutting off part his body (if he had climbed into the chair from the outside of the desk — in other words, the same direction he entered the studio. 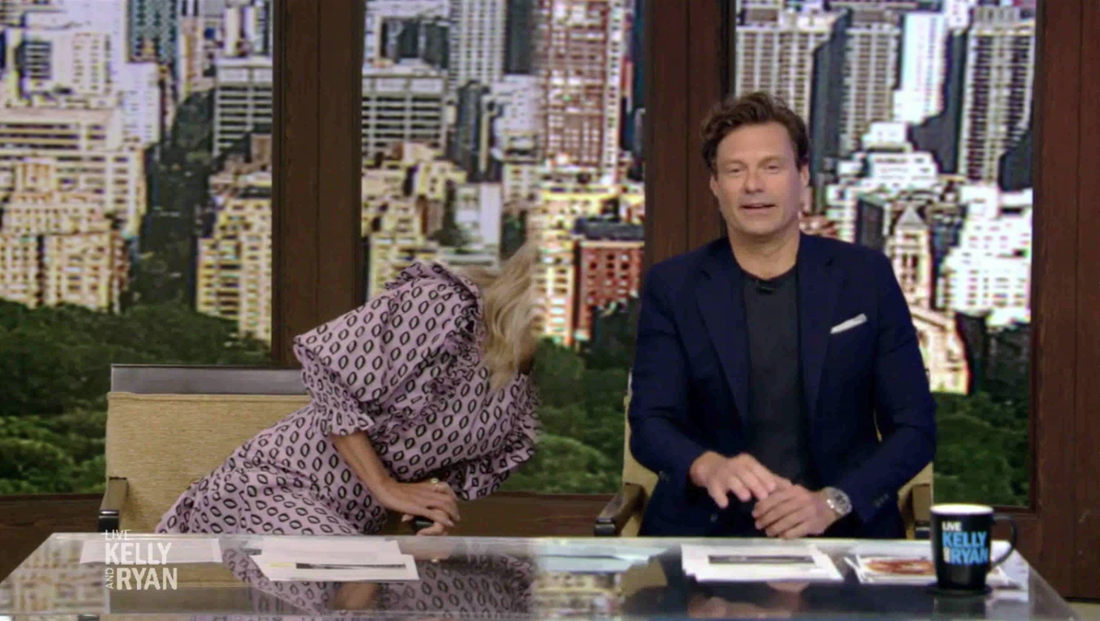 The pair later explained the effect and even had some fun playing with “loosing” part of their bodies by leaning into the point where they would be cut off.

Other elements also broke the illusion, although these were much harder to spot — for example, the cityscape on the video wall behind the anchors didn’t quite lie up and some of the papers on the desk “disappeared” into the fade. 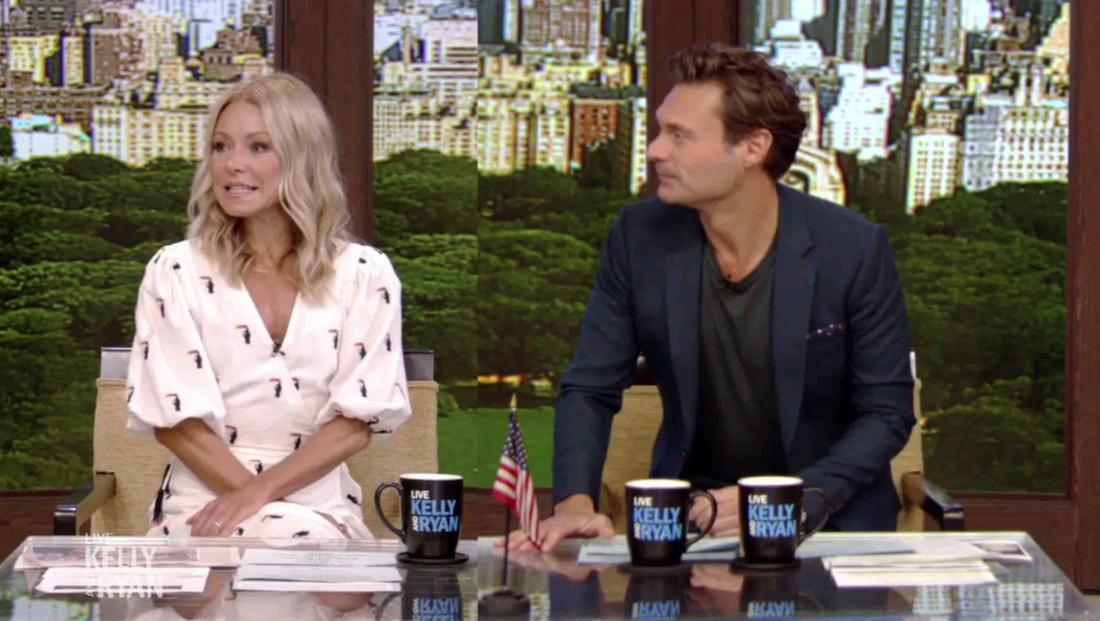 The next day, the show dropped the blur effect between the two composited shots, instead opting for a simple straight line.

The screen division was also slightly less on Ripa’s side to allow for the small American flag, a staple of the show since Sept. 11, 2001, to sit on the desk between them (though in reality it was on Ryan’s side).

This change made the “dividing” line a bit more obvious, showing where the city view and desk surface wasn’t quite lined up.

The primary advantage to using this approach is that it made Ripa and Seacrest not only appear to be seated closer together, but when they turned to look at each, the effect held up since they were seated parallel to each other. 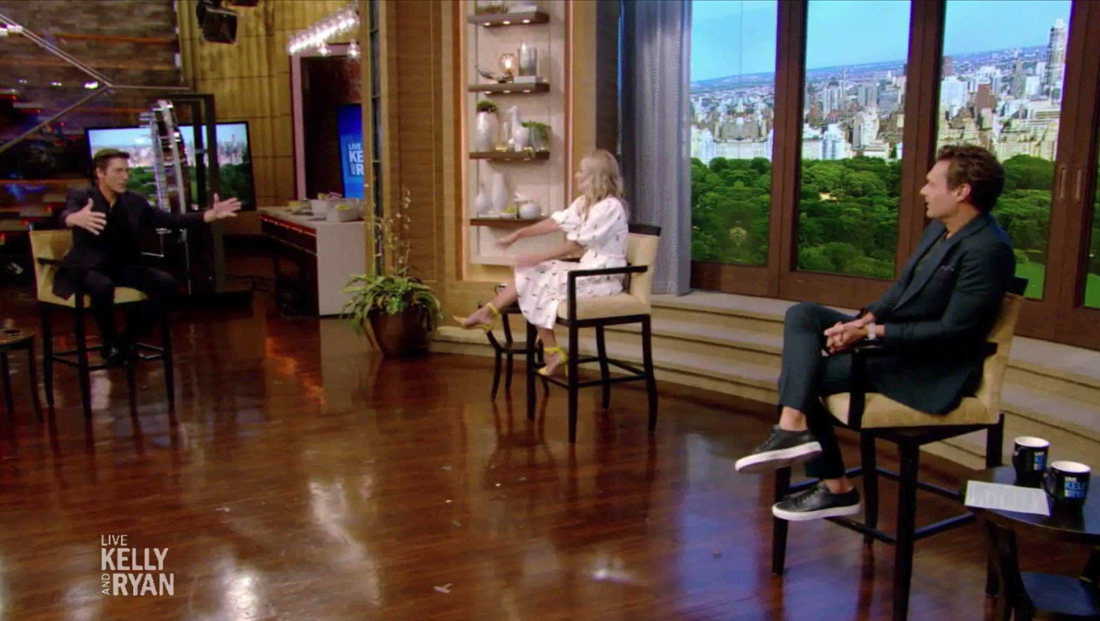 The show also had in studio guests — socially distanced, of course — where Seacrest and Ripa lost their desk and the guest was seated off to one side.

In some ways the setup helps the show maintain the look of the famous “host chat” format to viewers at home that heavily relies on a two shot.

That said, some in the industry have noted that having talent appear socially distanced on air is a good way to remind viewers of doing so themselves.

Other programs with more than one host have been either placing the image of each person in a separate, distinct box (or with a thick line down the middle of the screen) even when they are seated on the same set but farther apart than normal.

Despite the on-screen explanation, some viewers wrote in and expressed concern about the setup in later editions — meaning the hosts had to explain the trick again.