Broadcast audio monitoring and the need for interoperability 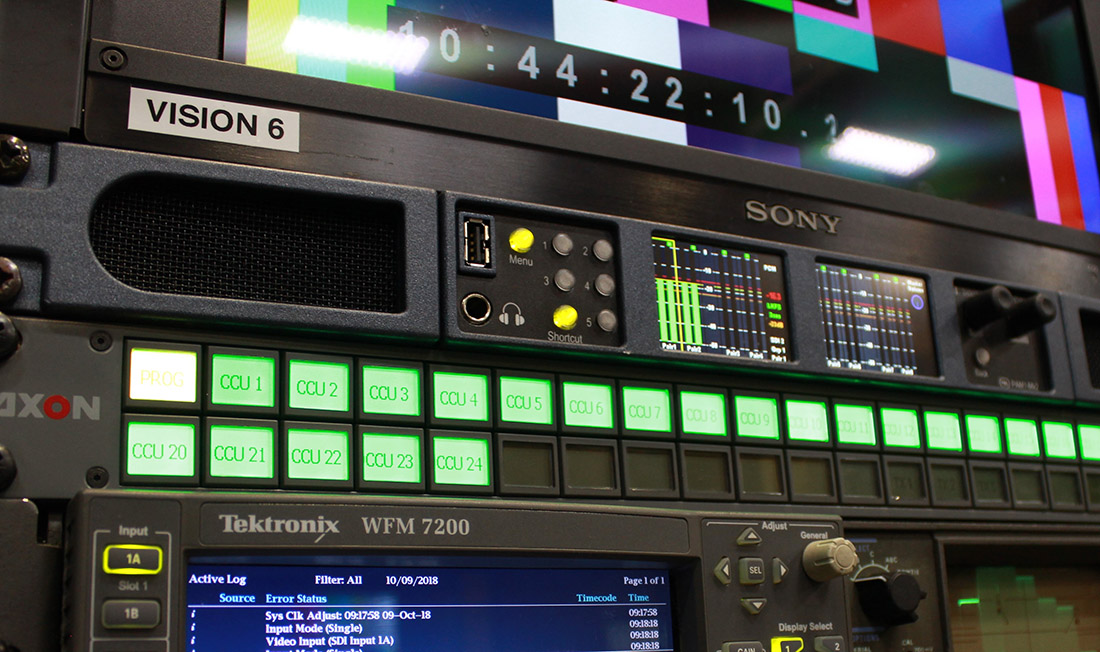 Audio monitoring has been a staple in broadcast sound operations since the earliest days of television and radio. Once basic metering solutions with integrated loudspeakers, modern audio monitoring units (AMU) have developed into fully networkable, controllable devices that host a range of features and functionalities.

The purpose of an AMU is to monitor audio signals and make sure that the systems through which these signals pass are all functioning adequately. AMUs allow required signals to be isolated, whether on headphones or loudspeakers, for identification and subjective assessment throughout a broadcast.

Measuring an audio signal is a critical element of the audio monitoring process. At any time, audio level measurement can be carried out using a simple moving coil meter design based on mechanical-electrical technology. Primal audio level metering solutions have evolved alongside technical advancements over the years. Today’s systems feature graphical displays, such as LEDs and tough screen bar metering. Although basic audio level measurements still play a part in modern AMUs, loudness monitoring is now the primary parameter being measured.

Additionally, throughout the evolution of AMUs, the capability for remote control, especially using third-party protocols, was never in the forefront. Traditional AMUs have been controlled by operators on-site, often to recall presets. However, this manual approach is now being challenged due to the emergence of IP as well as the current need for remote control of broadcasts due to the COVID-19 pandemic.

IP and Remote Operation in Broadcast

As broadcast technicians transition to IP connectivity, powerful networking and remote operations are made available. In order to take advantage of all of the possibilities offered with IP, it is crucial to have the necessary protocols in place. Think of it this way: without protocols in place, it’s similar to having a television without a remote, it cannot be controlled. In terms of broadcast sound installations, the connection between the audio device and the IP network is required. The IP network is the core of the broadcast facility and is used to transport audio signals as well as control the information itself.

In order to align with the transition towards IP, AMUs have had to adapt over time. Previously, it was enough for manufacturers to provide a variety of audio monitors that offer a range of input options and support point-to-point connections. In older SDI infrastructures, the control system would connect to the SDI router and the system did not need to know what devices the router was connected to. Today, by replacing SDI routers with IP switchers, the system can control the devices that it’s directly connected to, including the AMU. TSL Products has evolved with the times, taking this approach with the newest generation of its flagship AMU, the PAM-IP.

To support broadcasters through the transition towards IP, TSL’s PAM-IP can connect to both SDI infrastructures and IP networks. The PAM-IP can be controlled ‘In-Band’ using the same network infrastructure as that being used to transport ST-2022-6 and ST-2110 audio and video content, as well as ‘Out of Band’ using a separate IP network if required. Either way, the PAM-IP allows for communication between the AMU and control system, which can be used to permit source selection.

In SDI infrastructures, an AMU with four SDI inputs in a point-to-point configuration would be considered sufficient. However, in the IP domain, the crucial point is no longer about the number of inputs an AMU has—rather, the focus in on the control protocols in place. The notion of using presets on an AMU to switch input sources is now being replaced by a control system that can allow any source within an IP network to be monitored by the AMU. Modern broadcast control systems need to provide a solution that allows all devices to be controlled, as well as provide a level of intelligence that reduces operator error. 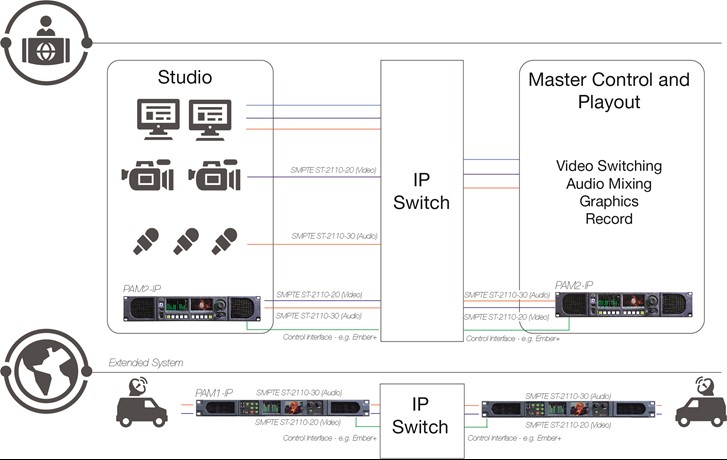 Additional issues that influence modern AMU designs are the standards on proprietary formats it must conform to. IP networks are being used to transport standards such as SMPTE ST-2022-6 and/or ST 2110, whilst proprietary audio over IP (AoIP) formats such as Dante or Ravenna are now commonplace.

Interoperability for Connections and Control

AoIP offers new possibilities for connectivity and networking, however, because the majority of systems are proprietary, including Dante and Ravenna, users are limited to only compatible audio devices. The AES67 standard has solved that issue to a certain extent, finally allowing audio to be transported between non-compatible audio devices, but effective discovery and control of audio devices from different manufacturers of AES67 products must also exist. With this, broadcast operators can enjoy a simple, plug-and-play experience, which is now typical of proprietary AoIP formats.

The importance of standardization extends to another interoperability layer, the control and discovery function. When selecting audio monitoring products to monitor content transported using IP, the control protocols it can support, whether ‘In-Band’ or ‘Out of Band,’ are important if a situation similar to the incompatibility between IP transport standards and proprietary formats is to be avoided.

To simplify this for broadcast operators, TSL Products provides three control protocol options on the PAM-IP, including NMOS (Networked Media Open Specifications), Ember+ and the PAM-IP’s unique application programming interface (API). The API enables systems integrators or broadcasters to control the PAM-IP within an IP network, regardless of which broadcast control system they chose.

As with any device connected to an IP network to monitor or produce content, modern AMUs must continue to evolve in order to provide support for a number of control protocols, whether existing or forthcoming.