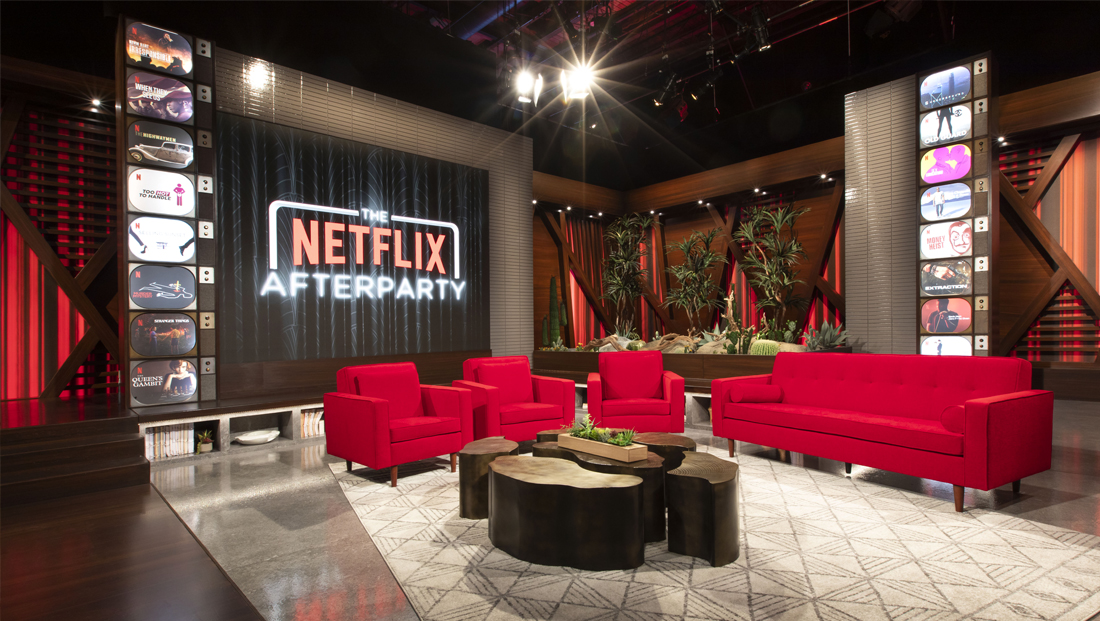 “The Netflix Afterparty” set is a fashionable take on a hangout space with some mid-century and more modern vibes that incorporates nods to the streamer’s branding.

The set, from production designer James Pearse Connelly, is centered on a cluster of bold red armchairs and a sofa — a color choice inspired by Netflix’s trademark color, originally used on its DVD return envelopes.

Much of the space, which was built at Sunset Bronson Studios, is surrounded by backlit duratrans printed with familiar vertical blurs sourced from the company’s five-second logo vanity card that appears before most of its original programming accompanied by the “ta dum” audio signature (which was reimagined as a 15-second version over the summer of 2020 for use in theaters).

The bold red vertical lines also suggest a nod to the folds in the rich fabric curtains often found in performance spaces, especially the iconic ones in Hollywood.

Framing out this background, quite literally, is a variety of wood-toned “beams,” slats and even solid panels, all set within horizontal headers and footers.

While the angles used here don’t replicate the letterform in the Netflix “N” icon example, it’s certainly easy to find more than a few Ns throughout the walls.

The concept also plays well into the “ribbon” motif the “N” icon has as well as, in the case of the horizontal slats, a rotated version of the strong verticals in the production card. 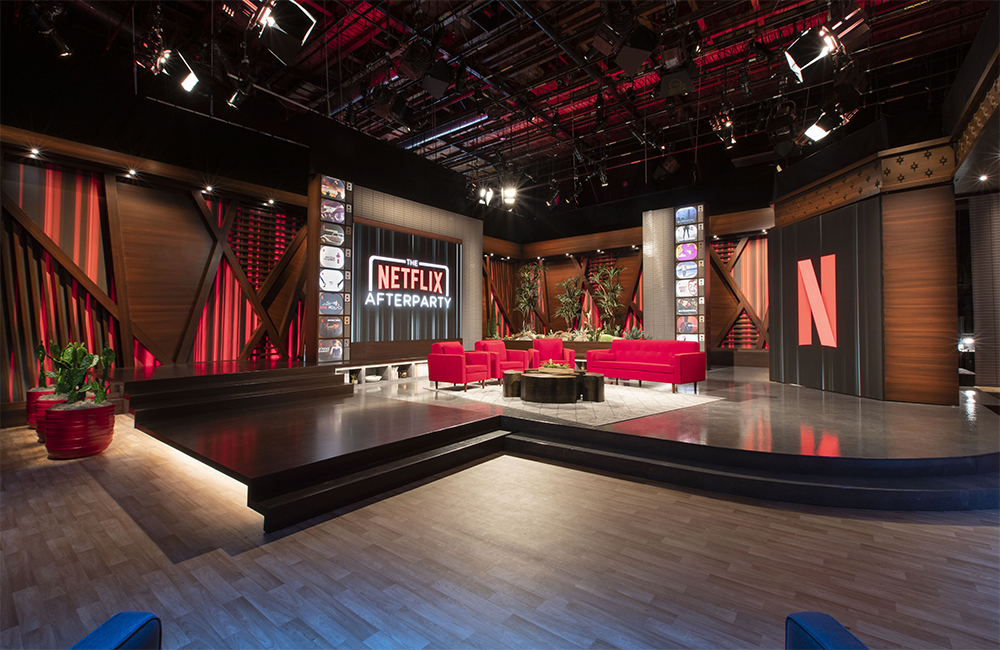 The set design of ‘The Netflix Afterparty.’

Behind the armchairs for the three co-hosts is a large LED installation with an upside L-shaped frame created using a tan subway tile-style material installed in even columns and rows rather than staggered. This material pops thanks to elegant lighting placement by Michael UpdeGraff, who designed the lighting for the entire studio.

Meanwhile, the left side of the video wall features a stack of simulated old fashioned television sets complete with a dial.

Somewhat ironically, these are actually created using LED video panels so the show imagery in them can be changed out in an instant.

Filling these elements during the year-end special is the key art of select Netflix original shows such as “Tiger King,” “Emily in Paris” and “The Queen’s Gambit.”

The “screens” are notably closer to the 4:3 ratio as well as feature the rather extreme rounded corners that television sets used to sport.

A similar installation sits on the other end of the seating area, with a tiled column next to it.

Between these two spaces is a planter with three tall plants along with a collection of succulents and cacti below, a nod to both Spade’s southwestern origins and an increasingly popular home decor element that is often coupled with mid-century pieces.

The set also comes with a large, angled wood-toned wall with a square LED installed along the angle, which can serve as a way for on-set talent to interact with remote guests, an element that broadcasters are increasingly having to lean on due to the coronavirus pandemic.

The entire seating area sits on a two step up riser that curves on the right side while creating a straight, waterfall installation on the left.

Graphics for the LED panels, meanwhile, default to a dark, monochrome rendition of the vertical lines in the vanity card — which almost creates the look of an elegant black curtain.

During the show, however, this display technology allows for interaction with remote guests.