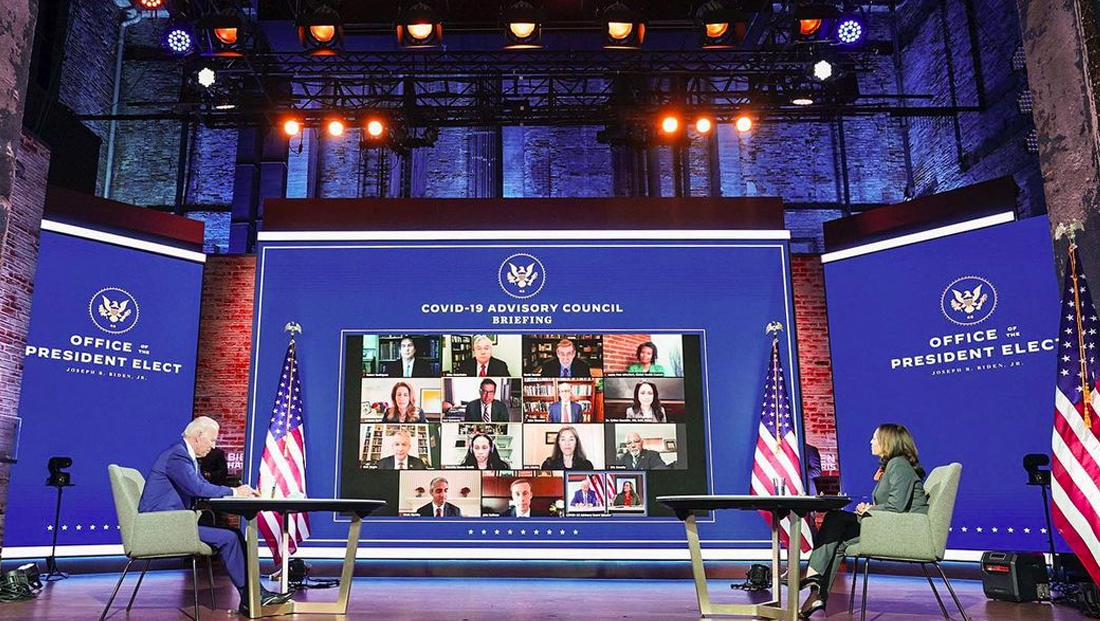 The Queen Theater in Wilmington, Delaware, has never hosted an event quite like this.

There’s been musical acts, concerts, corporate and special events and weddings pass through its restored halls — but since November 2020 it’s gotten considerable national media exposure thanks to its latest headliner — president-elect Joe Biden.

Throughout and after a bumpy start to its transition due to a delayed sign off by Trump administration officials, the Biden camp has been using the space more and more as a combination press briefing room, conference room and, yes, TV studio.

The Queen itself dates back to way before TV was ever invented — in 1789 the base of the building, then a hotel, was constructed on the site, according to the Light Up the Queen Foundation.

Over the years, more levels were added to the hotel and it even once hosted then future president Martin Van Buren.

It would eventually be converted to a movie theater, triggering the creation of the core auditorium space, which shuttered in 1959 — and the building would remain closed for five decades.

In 2008, real estate developers Buccini/Pollin Group announced a deal with the City of Wilmington to turn the building into a performing arts venue and fundraising began.

Homsey Architects lead the design efforts and construction started in 2009 with BPGS heading up construction, according to the companies’ websites.

The design team noted the project was a combination of historic preservation and “adaptive reuse” renovation and construction photos on its website illustrate the extensive work that was done on the building.

Much of the interior of the space blends new construction with aged, weathered looks, some of it left over from the historic framework of the building.

For example, the walls in the auditorium, which, in its heyday, sported a much more finished look, were purposefully left mostly as they were in 2011, creating an industrial or loft feel that, thanks to details such as archways and reliefs, add a hint of elegance.

For Biden, the stage is wrapped in a scenic exposed brick backdrop, typically dramatically lit to showcase the texture and rich colors, though it’s not original brick.

Camille Connolly designed the Biden stage components while working closely with fabricator Blackwalnut, and the scenery was built by an all union crew. In addition, a director of photography, Declan Quinn, was also heavily involved in the project.

Following the tradition of combining old with new, the stage also has three large seamless LED video walls installed — with one large one in the center and two smaller ones flanking this.

It also sports a glass strip with the campaign logo meant to seen during times when people enter through the spaces between LED.

NEP and Creative Technologies provided the 1.5mm Roe Visual LED panels along with cloud services to power the video feeds.

The project was an extremely tight turnaround — about three weeks — given the nature of the unfolding events post-election day.

Behind the scenic brick wall, another exposed, raw wall of the actual building is typically washed with blue.

Of course, the video wall technology gives the space the flexibility to be used for a variety of purposes — with the primary wall often serving as a “step and repeat” style background behind media events and speeches.

Blue is typically the dominant color shown on the panels and internally lit header and footer elements are illuminated with white, creating a subtly patriotic color palette.

When used for a single, straight on shot, the video walls often display repeating logos or text related to what’s been discussed — and carefully placed on either side of the speaker’s head when framed on camera.

Most of the designs also “skip” placing any text or key imagery in the very center to avoid having the speaker’s head cover anything.

These looks also often include a large banner or header running above the top of the LED panels, but photos taken from the audience level typically make this appear as if it’s behind the speaker’s head.

However, the video walls go well beyond being just simple backdrops.

Due to the coronavirus pandemic, the space has been the physical “home base” of virtual events and the video walls are often leveraged to insert video feeds that Biden and vice president elect-Kamala Harris (among others) can face and interact with.

To achieve the “cross talk” look similar to that used on TV debate and discussion shows, small, locked down cameras can be placed on stage, allowing the team to capture single shots of the people physically on stage with minimal visual interference.

“It sort of looks like they re-created the Situation Room: the big screen and all these different people on it with him being at a presidential desk,” Joe Trippi, a Democratic strategist, told The Boston Globe in November 2020.

Meanwhile, the entire space is reconfigurable — the video walls can be moved physically closer together, reducing the amount of brick that is visible.

Other looks, many of which have shown up in combinations, include:

In many ways, the project is a combination of live event design (there has been limited media allowed in the audience area and during a non-pandemic year, it’s likely more people would be present in person during presidential transition events.

Because of the pandemic, the project really turned more into a TV studio set design.