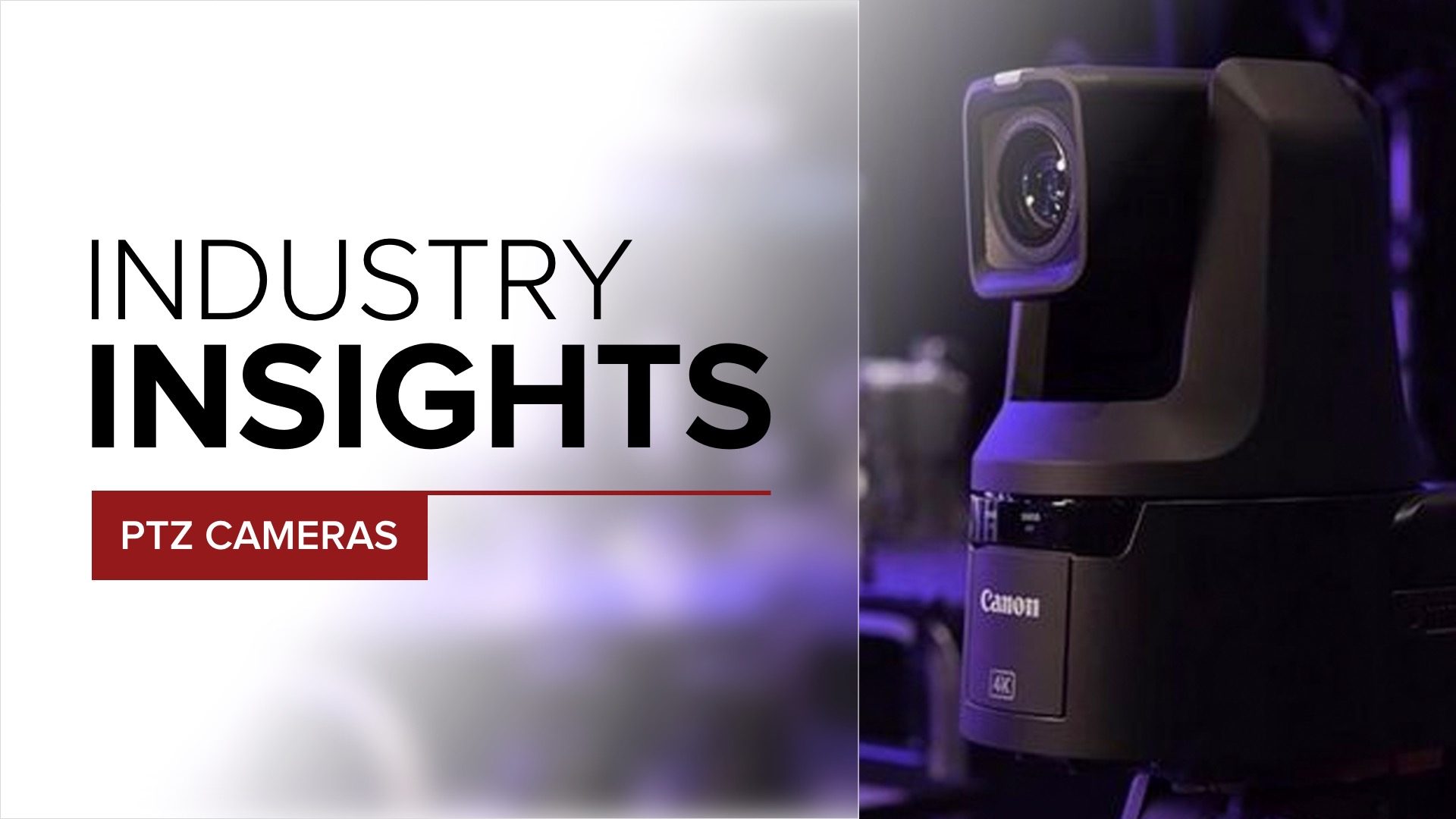 PTZ cameras have become a fixture in many broadcast studios due in part to their compact size, lower price point and robotic operation. They’re also popular for event production, house of worship and corporate applications.

From views of the anchor desk to skycams, PTZ cameras continue to increase in resolution and feature set.

In this installment of our Industry Insights roundtable, our experts from the field of broadcast cameras discuss PTZ cameras and how they fit into production.

Make sure to check out our other roundtable installment which looks at traditional studio cameras.

Has the push towards PTZ cameras by some local affiliate broadcasters helped or hurt the industry?

“Given the changing production environment with the pandemic crisis, broadcasters who have incorporated PTZ camera technologies have created more nimble scenarios for their teams,” said Paul W. Richards, director of marketing for PTZOptics.

“I believe from a viewer perspective PTZ’s offer enhanced production value, showing more perspectives in the studio and more remote contributors from home studios, especially during the pandemic. We’ve seen more and more secondary shots from our PTZ and fixed position cameras installed in newsrooms of all sizes, as these cameras provide more depth of reporting and more source options,” explained Tod Musgrave, director of cameras for Marshall Electronics.

“The use of PTZ cameras have helped the industry by offering easy-to-use and setup options that provide different shots and multiple camera angles – from a single operator. As a result of the pandemic, realities have changed and PTZ cameras have helped operators adhere to social distancing requirements and are able to be operated remotely, meaning there’s less personnel required on-site,” said Eisuke Sakai, a business manager for Sony Electronics.

“The automation offered by PTZ cameras enables production teams to incorporate more camera angles with fewer cameras and operators by creating presets for a variety of shots throughout the studio. For example, a PTZ camera can effectively capture a wide shot of two hosts seated at the anchor desk, while that same camera can pan over and zoom in to the sports desk or a meteorologist in front of a green screen with the click of one button,” said Richards.

“We envision PTZ cameras as an alternative option for remote production. PTZ provides such benefits as consistent repeatable shots and the ability to control the camera remotely. The tradeoff is the difficulty or inability of using them in mobile applications,” said Craig Yanagi, JVC Professional Video’s national marketing manager.

“During this past year, broadcasters have looked for more ways to incorporate gear that they already own, gear with more accessible price points, and gear with remote control capability into their existing workflows. Many of our customers are using PTZ heads on our Micro Studio Camera 4K and others to give them more flexibility in camera control while maintaining extremely high-quality images,” responded Bob Caniglia, director of sales operations in North America for Blackmagic Design.

What is the best use case for broadcasters with PTZ cameras?

“With social distancing protocols likely in effect for some time, re-designing sets to allow for safer distancing between anchors and in-studio personnel will be vital. PTZ cameras make it possible to have fewer camera operators on set, while their ability to be ceiling-mounted allows for creative shots above the anchor desk that would be more complicated for traditional broadcast camera operators to capture,” said Richards.

“Marshall has seen a huge increase in the use of its PTZ cameras in newscasts, primarily for additional perspectives throughout the studio not previously shown. For instance, a reporter in the newsroom providing the latest progress or updates on a story they’re working on. Also, PTZ cameras are widely used in remote home offices of guest contributors, which brings more perspectives and expert opinions to the story,” Musgrave said.

“As high-quality ‘box’ cameras deployed on PTZ heads can almost match the visual characteristics of studio cameras, they can be used as secondary cameras to provide additional camera angles that complement the main studio cameras without significant quality difference that would be noticeable to viewers. They can be combined with a jib or robotic pedestal to allow trucking, adding both efficiency and production value. In contrast, inexpensive PTZ ball cameras are most often stationary, mounted on a tripod,” Humphrey explained.

“The factors that favor the use of PTZ cameras typically stem from the operation itself, such as whether the production is to be streamed or if IP operation is mandatory. JVC PTZ cameras have the unique capability to be shaded remotely without the use of third-party products or an app while also being able to operate and stream directly, all with a single PoE Ethernet connection,” Yanagi said.

“Intelligent auto-tracking capabilities, such as those in the SimplTrack2 from our sister company HuddleCamHD, combine facial recognition and motion tracking technologies to give PTZ camera shots a more realistic feel by making sensitive adjustments in response to talent movement similar to how a human camera operator would,” Richards noted.

What is the next advancement to look for in PTZ cameras for broadcast? Resolution? Lensing?

“The next generation of PTZ cameras will certainly come with added features that include better resolution and larger image sensors, and they will also incorporate more artificial intelligence to enable easier control. These added technologies will include motion tracking, facial recognition and more adaptations to improve those controls. PTZOptics cameras now include motion sync, which is an advanced technology that triangulates the positions between two PTZ preset locations and is designed to make pan, tilt and zoom movements look more natural by synchronizing their movements together,” said Richards.

“Video quality will only improve with higher resolution sensor technology, along with ease of setup and video transmission over IP with easier discovery into workflows, lower latency of video and lossless transmission,” Musgrave said.

“Both box and ball PTZ cameras now have plenty of resolution and continue to get better and cheaper. PTZ-mountable box cameras such as Hitachi’s DK series can already accept the same standard B4 mount lenses as production cameras, with a wide selection of zoom range and quality glass,” Humphrey noted.

“For many users, VR and AR are top of mind so implementing the Free-D protocol is a common request. At Sony, we’ve provided a firmware upgrade for select PTZ cameras that allows producers and operators to simplify their VR/AR production workflows. We’re also seeing the need for 4K 60p PTZ choices and many options are coming to market. Another trend gaining in popularity is using a web interface to remotely control cameras,” answered Drew Buttress, a senior product manager for Sony Electronics.

“We see improvements coming next in the QoS of IP streams being sent directly from the PTZ cameras. In addition, subject tracking capability has been frequently requested in the marketplace. We should see advancements of both technologies in the future,” said Yanagi.